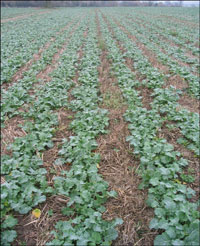 DEFRA has announced that genetically modified plants have been found in a trial crop of oilseed rape.

A statement from DEFRA’s GM inspectorate team said conventional oilseed rape seed containing a low level of unapproved GM seed had been sown on a trial site in Somerset.

The GM seed was of a type that is approved for import and food and animal feed use in the EU, but not for cultivation. No GM material has entered the food chain, the statement read.

The seed harvested from this trial, and an adjacent trial of spring oil seed rape, has been identified and is now being securely stored while the GM Inspectorate continues its investigation.

None of the seed was transported onwards to other destinations and the investigation has confirmed no other oilseed rape crops were grown in the vicinity at the time of the trial.

The case in Somerset was identified as a result of a tracing exercise carried out after GM seed was detected in a rape trial in Scotland.

“In September 2008, DEFRA was informed that a low level of genetic modification was detected in experimental seed of a new variety of winter oilseed rape entered in National List trials.

“This was detected before any of the National List trials were sown but a commercial trial involving seed of the same origin had been sown in Scotland,” a DEFRA official said.