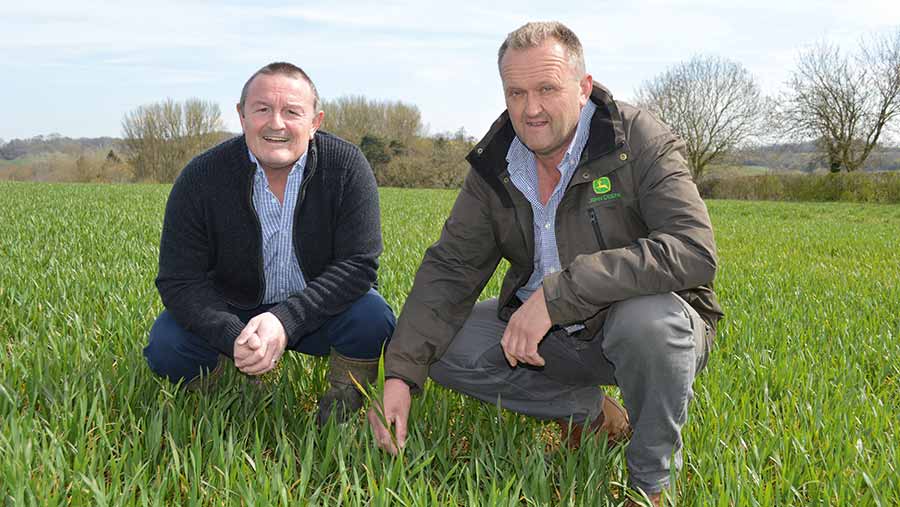 Rufus Dudfield is convinced early disease control in winter wheat is key to higher yields, also giving him the option of cutting fungicide costs later in the season.

He switched to using SDHI fungicides at the early T1 stage on all his wheat crops last year to keep disease at bay and its success has prompted him to follow the same approach this spring.

Septoria is the main disease threat to the 280ha of winter wheat he manages in north Oxfordshire, and keeping the wet-weather-loving disease out of the crop is crucial for good yields.

“I am convinced the use of SDHIs at T1 gives cleaner crops and helps yields,” he tells Farmers Weekly.

This year’s late spring has seen only moderate levels of septoria visible in the crops he manages, but he believes a preventative approach is best to protect his potential 10t/ha yields.

Cool temperatures have slowed crop growth this spring and he only applied most of his T0 azole-chlorothalonil sprays in the second week of April – about 10-14 days later than usual.

With an SDHI-azole-chlorothalonil plan for T1 some three weeks later, he hopes this will give his feed wheats a good start to combat disease throughout the season.

“If we get the T0 and T1 sprays right, there may be scope to reduce rates of fungicides later in the season,” he adds.

He initially tried the new generation of SDHIs at the flag leaf T2 stage when they were introduced in 2012 at Broughton Farms, North Newington, just south of Banbury, where soils vary from free draining ironstone loams to heavier clay.

Initial success led him to gradually increase SDHI use until in 2015 he applied them across all his winter wheat crop at T1 and also T2.

“Crops were a lot cleaner in 2015, even though it turned out to be a low-disease year,” he adds. 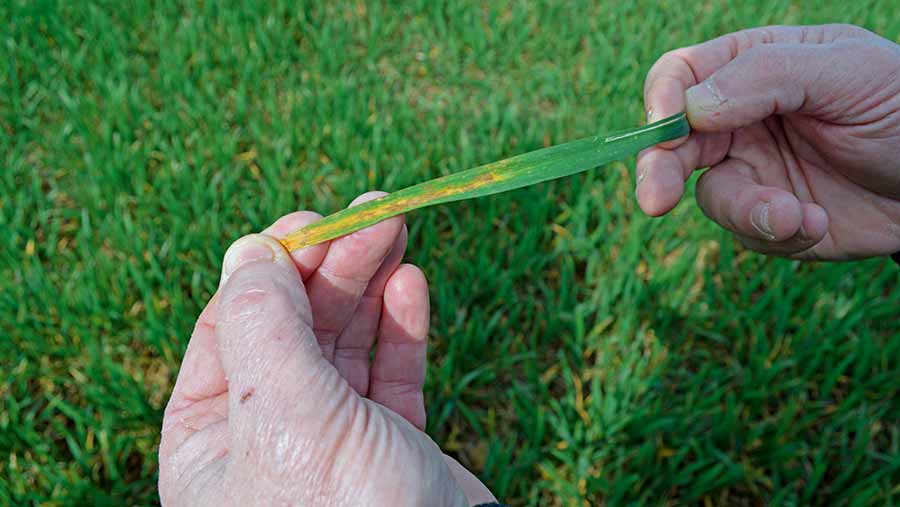 Although these trials were not taken through to yield, his winter wheat has given an average yield of 9.5-10t/ha over the past two seasons.

He is keen to keep a close eye on fungicide spend, which averages about £110/ha. He sees some opportunities to cut costs later at the T2 and T3 spray timings with reduced rates.

He grows predominantly the feed wheat variety Leeds, with some Santiago and Cougar, and all looked fairly clean of disease in mid-April, as T0 sprays were just completed.

The trend to earlier disease control on the farm means the cost of T1 treatments have often caught up with T2s, with the great use of SDHIs earlier in the season.

Mel Codd, business manager at agrohemicals group Syngenta, suggests a three-pronged attack at T1 to give good disease control and protect against fungicide resistance by using SDHIs, azoles and the multisite fungicide chlorothalonil.

“We can’t allow disease to get established early, as it will be difficult to claw back the situation at the later T2 timing,” he says.

The farm predominantly uses Syngenta SDHI azole product Keystone, plus chlorothalonil at T1 and T2. However, it is also using BASF’s Adexar on a smaller area to compare the two.

Mr Codd suggests a three-quarter rate of Keystone at 0.75 litre/ha, which should cost about £27/ha plus chorothalonil (Bravo) to give a total cost for a T1 spray of £31-£32/ha.