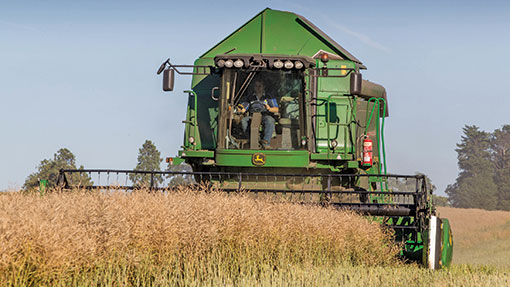 Extra-late nitrogen could be particularly valuable in making the most of some of the best-structured winter oilseed rape canopies this season.

Crop specialist Pete Berry, at crop scientist group ADAS, said some of this year’s crops are the best looking at this stage that he has seen in recent years.

He adds that about 40kg/ha of foliar nitrogen applied at the end of flowering in oilseed rape crops has given an average yield response of more than 0.3t/ha in a total of 23 ADAS and other trials that he has assessed.

This late nitrogen had followed optimum inputs of soil-applied nitrogen for both canopies and yield development earlier in the season.

“Oil is formed relatively late in seed fill, so anything that can be done to prolong seed filling will lift oil production at harvest, providing the canopy is actively photosynthesising and capturing sufficient light,” he said.

“Active photosynthesis during seed fill is essential to seed yield because, unlike cereals, oilseed rape does not mobilise carbohydrate from the stem to support the developing seed,” he added.

“However, the seed does extract nitrogen from the pod walls. This makes late nitrogen valuable in providing sufficient nutrition to allow the seeds to grow without unduly hastening pod senescence,” Dr Berry said.

It is also possible that good canopy structure and yield potential are important factors in the equation.

“We know that open, well-branched canopies with plenty of photosynthesising lower leaves and pods are the secret to high seed numbers and good seed fill,” he stressed.

These type of canopies allow sunlight to penetrate much better below the upper layers than dense canopies of thin plants to improve the photosynthesis process.

“The optimal 20-30 plant/sq m populations with excellent primary and secondary branching we’re seeing in far more crops than usual this season, leaves them well-placed to make the most of whatever the summer brings,” he said.

Dr Berry added that a combination of appropriate seed rates, the open autumn and good plant growth regulation also means that crops are generally well-rooted with good access to the available soil moisture.

He added that the value of these late nitrogen applications will also depend an assessment of all the costs involved – including any reduced oil percentages and additional application expenses – as well as seed values.

“So I would urge growers and their agronomists to assess their particular crops and circumstances as soon as possible if they wish to take advantage of what could be an excellent opportunity for many,” he said.