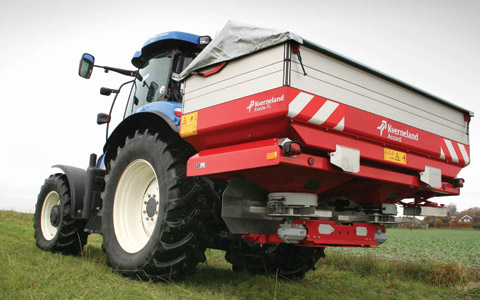 As fertiliser spreading widths have increased to the benefit of work rate, operators have been faced with a greater challenge keeping wasteful overlap applications to a minimum along curvy field boundaries and where tramlines converge.

Now, help is at hand in the form of GPS-guided control systems and specially-equipped spreaders that automatically adjust working width to avoid doubling up on areas already treated. They also ease the operator’s workload by switching on and off accurately at headlands.

These features neatly sum up the appeal of Amazone’s GPS-Switch system to Yorkshire grower Peter Dook and his brother-in-law James Thompson. They farm separately near Doncaster, but in recent years have shared all machinery with the exception of tractors to reduce capital costs.

Among the shared fleet is a 4,200-litre/28m trailed sprayer that saw service for the first time last year and a 3,000-litre twin disc fertiliser broadcaster. The GPS-Switch system is used on both machines to provide working width section control and headland on-off, so the £3,000 or so investment is exploited throughout the growing season.

“With the new sprayer taking tramlines widths from 20m to 28m, operating either machine when you’re working a triangular section becomes even more difficult to judge by eye,” says Peter Dook. “It made sense to add the control system when we could use it on both machines.”

GPS-Switch is available on all Amazone ZA-M mounted and ZG-B trailed fertiliser spreaders equipped with hydraulic drive to the discs and on-board weighing. They come as standard with an Amatron+ control box, which is connected to the look-alike GPS-Switch unit.

This receives and processes GPS signals received via an antenna attached by magnet to a metal bar bolted to the top of the tractor roof. It displays a trace as work progresses, offers a “return to” flag when the hopper needs refilling and provides steering guidance for spreading or spraying before tramlines have been established.

Data on each application job can be saved to a USB memory stick and transferred to PC-based farm records.

“I wasn’t looking forward to using the system for the first time because I was convinced it would be another complicated thing to operate,” Mr Dook admits. “Like any computer, it does take a while to recall what to do when you’ve not used it for a while – but it’s actually quite easy to use.”

Initial programming involves measuring and entering the distance between the GPS antenna and the centre of the spreading discs. By default, the system closes the hopper slides as the discs pass over the cut-off point (one spreading width out from the field boundary) but delays opening them again when leaving the headland until the discs are further into the field.

This allows for the more or less semi-circular distribution of fertiliser behind the spreader; the opening point is set at 50% of the spreading distance to the rear but can be adjusted.

For a sprayer, the switch on-off points are virtually the same. Some allowance may need to be made for the switch-on point to allow for any delay between the instruction being given and the nozzles producing an output, especially for drivers inclined to accelerate quickly to a fast working speed.

In parts of the field where the spreader starts covering an area already treated, the GPS-Switch system slows one of the discs in three steps to reduce its throw and speeds it up again when it reaches virgin territory once more.

The same thing can be done manually, of course. But, as Mr Dook says: “That’s hard enough to judge when you’ve got a 28m spray boom, but impossible when you’re spreading fertiliser.”

He runs the spreader on a McCormick TTX230. This 213/225hp machine is a substantial tractor for applying fertiliser, he concedes, but it’s one of just two power units used for all field work on the 240ha farm.

With decent-size tyres run at modest pressures its weight is not a problem, he argues, and the tractor remains well balanced when carrying the big spreader, especially on banks. 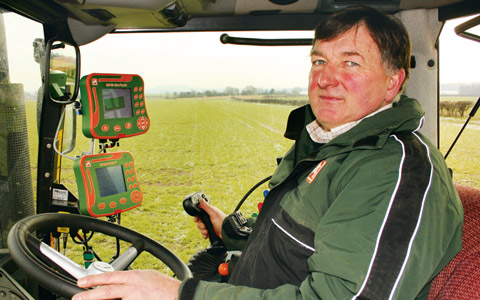 A joystick controller brings all manual operations close to hand (although it has rather more functions to perform when used with the sprayer) and the two terminals have been neatly installed one above the other in front of the right-hand pillar by simply extending the mounting rod used for the Amatron+ unit.

“The different components plug together quite easily, so it doesn’t take long to move everything between our tractors,” notes Mr Dook. “And once it’s up and running, the GPS-Switch system just makes the job more relaxing.

“After one circuit of the field to map the boundary with the spreading system in manual, I can switch to auto and just sit back and steer,” he adds. “I haven’t any figures, but my impression is that we’re more productive because it takes away any caution or uncertainty that can slow you down.”

GPS reception has not been a problem, he adds, and the ZA-M Hydro’s weighing system means calibrating the machine for different types or batches of fertiliser is done from the comfort of the tractor seat. Auto spreading width and headland control is the icing on the cake: “I wouldn’t want to work without it,” says Mr Dook.

Auto control option could save 2-10% on fertilisers 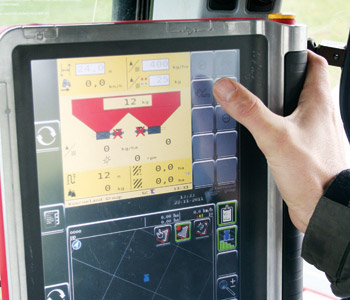 Fertiliser spreader auto control developed by Kverneland Group for its Accord and Vicon broadcasters could save 2-10% of fertilisers applied by switching machines on and off more accurately at headlands and minimising overlap wastage, according to the manufacturer.

GeoControl can also be used with Vicon sprayers and precision seeders from both product lines and comprises a suite of software developments for the Isobus-compliant IsoMatch Tellus terminal. This touch-screen unit provides an interface for setting up and operating any implement with an Isobus-standard on-board computer.

GeoSpread versions of the Kverneland Accord TL Exacta and Vicon RO-EDW weigh cell spreaders have electric actuators on the hopper outlets and feed-on point mechanism used to alter spreading width. They tap into the built-in GPS capability of the Tellus to follow variable rate application maps and minimise wasteful double application.

“The operator can adjust how much overlap is allowed, which depends on the job and materials involved,” notes Andrew Bowley, Vicon brand manager. “He can then leave the system to alter working width to prevent excessive overlapping where two passes converge.”

Regardless of the working width chosen, the system can trim the spread in steps up to 2m at a time and adjust the flow of material to compensate. It also stops and starts accurately on headlands and has a fail-safe mechanism that prevents the spreader working when backing up and when it moves outside the mapped field boundary.

Operators can use GeoControl documentation to export data to farm records and the IsoMatch Tellus universal terminal is unique in having two display screens – so it can show implement data at the same time as a trace of where the spreader has already worked.

• For a detailed technical description and animations showing how auto fertiliser spreader controls can be used to save inputs and ease the operator’s workload, log on to the Power Farming website