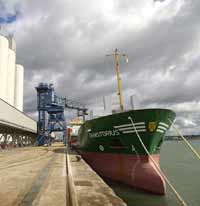 Isle of Wight Grain Storage, the co-operative servicing 50 farmer members on the island, has switched its marketing operation to leading merchant Frontier Agriculture from harvest 2010.

With up to 30,000m tonnes of grain stored and marketed each season, the tie-up will give IoW Grain greater access to the international markets, especially given Frontier’s ownership of the Southampton grain terminal, just across the Solent.

Frontier’s Andrew Flux, who negotiated the deal, says the company will target higher value export markets on behalf of IoW Grain’s members. “The early harvest on the Island, which is normally of good quality, gives us plenty of options for marketing,” he says. “This agreement gives us the opportunity to make the most of our international connections to export grain from the island.”

The majority of the grain stored and marketed through Isle of Wight Grain Storage, which include milling wheats, malting barley, oilseed rape, oats, rye and linseed, will be sold through a Frontier-managed pool.

“The unique nature of farming on the island means that we need a committed marketer of our grain and believe that the combination of a farmer storage co-operative and a commercially driven business like Frontier will deliver that,” said IoW Grain’s chairman, Zoe Chapman.