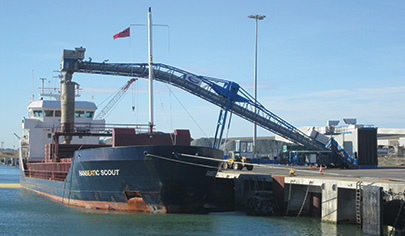 The two approaches to storing grain can both prove expensive. An on-farm store requires considerable capital outlay and running costs, while co-operative stores typically involve a one-off investment to purchase the space, plus annual fees.

But now there is a third option, for growers in East Anglia at least, and it has gone from strength to strength since launching in 2013.

Gleadell Agriculture’s Grain Storage Club stems from the firm’s development of the port at Great Yarmouth.

Having negotiated the lease in 2009, it has since spent £5.5m on improved grain handling facilities, turning Great Yarmouth into a significant player on the export market.

“There are a lot of growers looking to move grain at harvest, but they don’t necessarily want to accept as-available prices or the capital outlay of central storage,” says the firm’s Paul Dowson.

“I thought we could offer a more flexible deal to help our growers and secure tonnage for the port.”

The club works by inviting growers to sign up to an open-priced contract for a certain tonnage, which is moved at harvest, but can be priced at any time. Members pay a fixed fee to store their grain until November, or a later date as required.

However, there are no obligations to fill that tonnage, so if yields are low or harvest prices prove attractive, there is no requirement to move grain into store or pay the storage fee.

“Because members pay only for what they use, it gives them a lot more flexibility to make informed marketing decisions,” says Mr Dowson.

“A couple of years ago the market was flat at harvest and futures options were cheap, so people sold at harvest and bought an option [to cover for any uplift in price]. We want to help people to make the right decisions for their grain and their business.”

Fees vary from year to year, depending on the spread between futures prices and the price of grain Free On Board (FOB) a vessel. FOB is the international term used at the point when the seller transfers ownership of the goods to the buyer.

Typically, costs have been £5-£8/t to store from harvest until November, and £1/t a month thereafter.

“There’s no minimum or maximum tonnage, although we are getting towards the upper limit of our storage capacity now,” says Mr Dowson.

Indeed, the club has proved so popular that it has grown from 13 members in the first year to 50 last year – and potentially a few more again in 2016.

“Everyone has been very pleased with it and has put in more and more tonnage each year. It also works well for the hauliers and ship owners – the port is getting a really good reputation for being efficient and easy to use.”

Capable of handling ships with a draught of up to 10m at any state of the tide, Great Yarmouth offers access to long-haul vessels as well as smaller coasters.

The grain store comprises four bays with a total capacity of 20,000t, two of which have grain-drying capability.

The dryers can process batches of up to 2,000t each at a rate of 0.5% moisture reduction per day, enabling Gleadell to access markets such as Algeria, which requires grain at 14% moisture.

“We can take deliveries at up to 20% moisture, and farmers pay a flat fee for drying, with no weight loss,” says Mr Dowson.

“Members also get priority movement and have the option to average both moisture contents and bushel weights across the farm, providing the year will allow it.”

Not all the grain will be physically stored, with some going direct from the farm to a local end-user, or straight on to a waiting vessel, he adds.

“If yields are high we’ll do our best to accommodate the extra tonnage – it’s just a completely transparent and straightforward process.”

Another advantage is that, unlike a central store, there is no double handling of grain, eliminating the need for handling charges.

Of course, growers have to commit that grain to Gleadell, whether on a priced or unpriced basis, so have to trust that when it comes to fixing a price potentially months down the line they will be treated fairly.

“We want to look after our members,” insists Mr Dowson.

“We are a global business with some very strong shareholders, trying to get the best market information to help our farmers.

“As the only deep-water port in East Anglia, we have access to global markets so can often pay a premium for farmers’ grain.

“We can also offer advance payments at preferential rates against committed grain to ease cashflow, which is quite important at the moment.”

In most cases grain is priced as if it were ex-farm at Great Yarmouth, meaning growers do not have to pay haulage charges, he adds.

“If you are further afield there may be a nominal charge, but we have usually got a local home we can take it to.”

To keep it simple, the club accepts only feed wheat and feed barley, on a standard contract of 15% moisture and 72kg/hl for wheat or 63kg/hl for barley.

“There are no claims for screenings and so on – unless there’s something badly wrong with the grain farmers will get paid for the full tonnage.”

But that’s where central storage comes into its own, providing the option to clean and improve malting barley or milling wheat, and maximising price premiums for growers.

“That’s just not what we want to offer here,” says Mr Dowson.

“With many growers taking on more land and needing more storage, this just provides them with another option.”

However, it’s not something that Gleadell is likely to introduce at its other port facility, at Immingham, which has storage capacity of 25,000t.

“Since the biofuel plants came online in the North East, the whole dynamics of UK exports have changed,” says Mr Dowson.

“Immingham is now more about imports to meet North East demand, and Great Yarmouth has really taken over for export. So it works well for us here, and it wouldn’t surprise me if some of our competitors jumped on the bandwagon elsewhere.”

In December, Peel Ports bought the Great Yarmouth facility, which should herald another era of investment.

“There are some exciting times ahead for the port and for us at Gleadell – we’re really pleased with what they’re going to be doing.”

The mobile ship loader can already process up to 650t per hour, giving hauliers a tipping time of as little as five minutes.

“Running the growers club gives us a secure supply of grain so we know what tonnage will be going through the facility at any one time,” adds Mr Dowson.

“It just makes it easier for us and our farmers when it comes to planning ahead.”

Speed of getting grain to market is key advantage

John Barrett, business manager at Sentry Farming, has been supplying Great Yarmouth for a number of years, and signed up to the growers’ club in 2013.

“Our farms are relatively nearby, and we don’t have particularly good storage or drying facilities, so we have to move a lot of wheat at harvest,” he says.

“We have to move it as quickly as we combine it, so the speed of getting the grain into the port is an important practical advantage.”

Hill House Farm, Hedenham, Suffolk, is about 13 miles from the port, and in total Mr Barrett manages about 1,190ha of combinable crops.

“Before we joined the club we sold a lot for harvest movement – now we can move it at harvest but still stay in the market until whatever month we choose,” he says.

Mr Barrett uses the on-farm storage and dryer for milling wheat, peas, beans and oilseed rape, and sends the feed wheat to Great Yarmouth. “We’ll probably have about 2,000t going in this harvest,” he adds.

“In 2015 it was better to sell it at harvest, but we will look at the carry in the market, and if it’s more than the storage charge it’s worth keeping.

“The difference between Gleadell’s price and any other merchant on the day will be very little – if they don’t offer a good price then their customers will just walk away.”