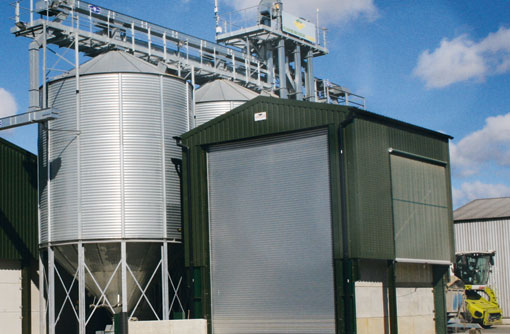 It used to be little more than a concrete-lined hole in the ground with a grid over the top and a rudimentary cover to ward off winter rain.

But with quick and efficient trailer turnarounds now more important than ever to keep high output combines rolling in a busy harvest, a lot more attention is being paid to the design and layout of grain store intakes.

Increasingly, the pit is being placed under cover – still outside the store to maintain maximum storage capacity and for good access, but within a structure that provides year-round weather protection and is big enough to provide meaningful wet grain storage.

There are two ways of achieving the latter: extract and lift the grain by elevator before heaping it up back in the pit area; or simply provide a floor area big enough to take several trailer loads without pushing up.

Apart from providing somewhere convenient and dry for grain to be tipped when the dryer is working flat out, this buffer capacity can also increase dryer capacity by providing sufficient stock of grain to keep the dryer working through the night and following morning until the combines get rolling again.

Original plans for the grain pit installed by Flawborough Farms as part of a new 7,000t grain storage and drying complex had the pit protected by a simple cover – but it ended up being housed in a substantial building of its own.

“It only needs an inch of rain to fall on a pile of grain to start getting problems and disruption to the transport chain from field to store,” says Tom Hawthorne. “Enclosing the pit gave us about 64t of covered capacity in addition to 336t in the dryer and a pair of 150t wet bins.”

The store can accommodate about two-thirds of the wheat and oilseed rape grown on 250ha of the family’s own farm at Flawborough and a further 1,600ha grown under contract farming agreements with neighbours. The rest goes into a couple of stores on client farms.

Compared with previous facilities – a 1,000t wooden grain store and an old Dutch barn – access is easier and trailer turnaround times have been much reduced. In short, the storage facility is no longer the bottleneck in the harvesting system.

Loads coming in off the combine are tipped straight into the 14t pit, which is housed in a structure wide enough for a lorry driver to easily walk down the solid section to one side of the grid to release the tailgate.

To allow for easier handling of grain that has had to be stockpiled while the dryer deals with a lot of wet crop, the pit building is open to one side so that a telehandler can grain in without getting in the way of tractors and trailers.

A Skandia conveyor carries grain away from the pit and either to the dryer, to a pair of 150t pedestal bins or straight into the store.

“We decided on commercial conveyors and elevators giving us 80t/hr capacity at the current setting but running slowly for longevity,” says Mr Hawthorne.

A larger capacity intake and handling system planned for a new dryer installation at Brecks Farm was revised to also handle bought-in grain and other bulk feeds for the farm’s 1,000-sow pig breeding and fattening unit.

As a result, the system has a year-round workload handling about 300t of grain plus other products every month, so industrial-spec conveyors and elevators were chosen to cope and the intake building was sized with enough clearance for an artic tipper as well as farm trailers.

The changes made a big different this harvest: “With a larger intake pit, higher-capacity handling equipment and a much bigger dryer, we could cut flat out when conditions allowed,” says Charles Hirst, who manages the farm’s arable operations.

The 7.5m-long intake hopper frame is lined with galvanised steel sheet so that grain, soya and other materials flow cleanly into a 60t/hr Kongskilde KCA60 trench conveyor. A 45deg inclined section beyond the hopper lifts grain high enough to be elevated to the dryer, to the adjoining floor store or through the store straight to a mill and holding bins.

“Previously, bought-in ingredients for home-produced feeds had to be blown into bins and that could take almost three hours for a 30t load at our expense,” explains Mr Hirst. “Now, a tipper can be in and out in a matter of minutes.”

At harvest, the new set-up eliminates a frustrating bottleneck.

“With the old intake arrangements, we’d end up with the combine waiting in the field while the trailer driver pushed up grain to make room for another batch,” he explains. “Now, with the big intake shed, the high-capacity handling system and a dryer that will drop grain from 20% to 15% moisture at 30t/hr, we should have no such hold-ups now and well into the future.”

A regular intake pit was never on the agenda when a new grain store was being planned at Creslow Manor Farm. As Brian Lear says: “They’re never big enough, they never empty fast enough, and you always end up with a nasty mess in the bottom because they’re difficult to clean out properly.”

Instead, plans for the 3,800t store included a large concrete-lined bunker with two Skandia trench conveyors set into the floor.

The lack of a pit means some sweeping is necessary to get the last of the grain or rapeseed into the system. But it also means the facility can be left spotlessly clean at the end of harvest.

The conveyors, which are spaced to coincide with trailer axle widths, each have a capacity of up to 20t/hr – providing 40t/hr in total when needed. Two ‘tramlines’ quickly appear in the pile so the next trailer can always back in and tip without delay.

Using variable speed control on the conveyor drive motors allows output to be matched to dryer throughput or set on maximum when crop is being whisked away to the store.

“This set-up has worked a treat, providing plenty of floor space to pile up grain under cover,” says Mr Lear. “The bunker itself will hold 140t and we added a pair of 35t wet bins over the far end to provide some extra buffer storage.”

The conveying system can automatically put grain into these bins when the dryer is full, so the bunker can keep clearing for more incoming grain. Once the dryer has spare capacity, opening a slide drops the bins’ contents back into the system.

“The dryer used to run out of grain early in the morning, but the extra 70t in the bins is enough to keep it going until we start combining again,” Brian Lear says. “At times we’ve run the dryer for 24 hours – it’s been a simple and relatively inexpensive way of increasing capacity.”