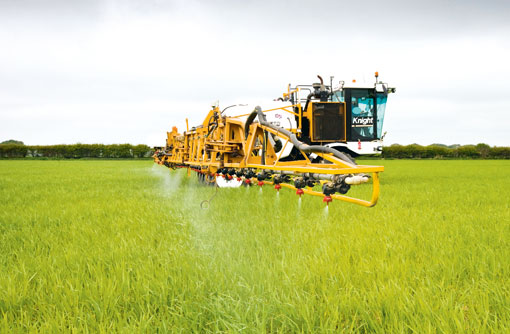 Maximising the available green leaf area during grain filling is crucial when looking to produce bumper yields, including drought conditions.

“We know that during grain filling in the UK, a wheat crop can put on 0.25t a day, so four extra days can give you an extra 1t/ha,” says Bill Clark, commercial technical director at NIAB TAG. Moisture limitations in the eastern counties may mean growers will struggle to keep crops going. However, high yields are possible on deep silt soils where moisture isn’t limiting.”

One way to maximise leaf area is through the greening effects of using an SDHI fungicide. And following approval from CRD, Bayer CropScience’s SDHI fungicide Aviator Xpro now boasts a label claim for yield increases from crop greening.

The revised label states that Aviator Xpro can increase the chlorophyll content in treated plants, extending the duration of green leaf area retention, for yield increases above those resulting from disease control alone.

And that, says Bayer’s fungicides campaign manager Alison Daniels, is the proof that the company has been waiting for, as well as the justification that growers seemed to need for using SDHIs in the absence of visible disease.

“There was some debate around whether using an SDHI last year, especially in very dry areas, would have any benefit at all,” she says. “That was frustrating for us, as we’ve always been aware of significant yield benefits from their use at T2, regardless of disease pressure.”

This is illustrated by the series of strip trials done by 51 growers across the UK last year which showed that 56% recorded a positive response from the use of 1 litre/ha of Aviator Xpro at T2, she says.

“The average yield response was 0.5t/ha. And for most of them, it was applied in low disease, droughty conditions.”

Just 29% of the growers had a neutral response, while 15% achieved better results with their standard fungicide programme, she adds.

“When we investigated the positive responses further, we found that 31 of the trial farms had either no or very low disease levels. So it was immediately obvious that the gains these growers had achieved weren’t driven by disease control.”

A further series of trials, where disease levels were negligible in the drought, showed a 0.3t/ha yield boost from the use of Aviator at T2, following a standard T1 treatment, she reports.

“That, together with work from previous seasons, prompted us to take a closer look at the effects of the fungicide on drought stressed crops,” reveals Dr Daniels. “There was clearly some physiological effect, which needed further explanation.”

Pot trials done by Bayer in Germany in artificial drought stress conditions allowed the use of infra-red thermography, so that researchers could see what was going on in treated wheat plants.

“What we found was that the Aviator treated plants were cooler,” she says. “They were still photosynthesising and weren’t losing water, long after untreated plants had given up.”

So, does Aviator have a beneficial effect on the crop’s use of water or bring rooting benefits to the plant, so that it can access more water? According to Ms (or Mrs) Daniels, it could be a bit of both, although she expects to be able to say more on this in due course.

“What we do know is that the plant is able to keep itself healthier for longer. That fits in with the greening that you see in the field.”

Further analysis on the resulting yield benefit showed that the extra yield was coming from an increased number of grains per ear, she continues.

“When we looked at different fungicide programmes, there was a benefit from Aviator applications in terms of grain numbers.”

Samples from the different programmes were sent to ADAS for analysis, she reveals. “The results showed an effect that is unique to Aviator amongst the SDHIs. There was a 13% increase in the fertile spikelets/ear, which is where the additional grain is coming from.”

It appears that using Aviator maintains spikelet fertility, she concludes. “It helps to counter drought stress at T2, which extends the grain filling period. So there’s a big advantage from using our product in dry conditions.”

However, she stresses that the fungicide helps crops to tolerate stress, rather than overcome it completely. “It won’t keep the crop growing in the absence of water or revive a dead plant.”

The stunning yield responses achieved by farmers last year show that the physiological greening effects of SDHIs are worth having, believes Dick Neale, technical manager of Hutchinsons.

“Our trials data wasn’t as convincing, as the results weren’t always significant or economically viable,” he says. “But in the field, there were some fantastic responses, with crops being notably greener.”

Crop health differences were seen too, he remarks. “To say that treated crops were more relaxed sounds a bit flippant. But they weren’t drought stressed, the leaf was still functioning, rather than being twisted.”

The aim of this Crops campaign is to help growers to maximise wheat yields. In the coming months, we will be providing you with best-practice advice and information on managing wheat to help you achieve this.

Already covered in this series: