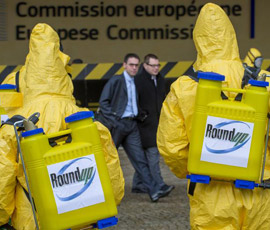 Activists from the environmental group Greenpeace donned masks and yellow protective clothing for a protest in Brussels against GM crops.

Twenty-seven activists – one for each EU member state – displayed a banner reading “toxic warning” outside the headquarters of the European Commission.

The organisation is citing a study which claims that the cultivation of GM crops would increase herbicide use by up to 15 times.

The commission is considering authorizing 26 new GM crops, 19 of which are genetically modified to be tolerant to herbicides – mostly glyphosate, an active ingredient in Roundup weedkiller, produced by US biotech company Monsanto.

Greenpeace has commissioned a new documentary, Growing Doubt, in which GM crops are blamed for causing devastating environmental and social consequences for rural communities in the Americas.

The report, produced by Charles Benbrook, claims the introduction of herbicide-tolerant GM crops would lead to substantial increases in the use of glyphosate and other pesticides, sharp increases in seed prices and the spread of corporate domination of food production.

Dr Benbrook said the reliance on herbicide-tolerant crops in the USA has triggered the emergence and rapid spread of nearly two dozen glyphosate-resistant weeds, driving up farm production costs, as well as the volume of herbicides needed to prevent major yield loss.

The report predicts increases of more than 800% – up to 1,500% in the case of GM soya – in the use of glyphosate in the EU over a period of 14 years for herbicide-tolerant GM maize, soya and sugar beet.

“Europe has a chance to learn from the mistakes made in my country,” said Wendel Lutz, a US farmer in Brussels, at the protest on Tuesday (6 November)

“Every time I’ve described the difficulties I’ve experienced on my farm, farmers in Europe have sympathised. And when they hear that the same corporate model could be employed here, they are naturally apprehensive about their own futures.

“We hope the commission will recognise these concerns and heed the warning we are here to deliver.”

Farmers in the UK are currently banned from growing GM crops for commercial use, but two experimental field trials of GM potatoes and GM wheat began this year. GM crops do, however, enter Britain, mainly as animal feed.