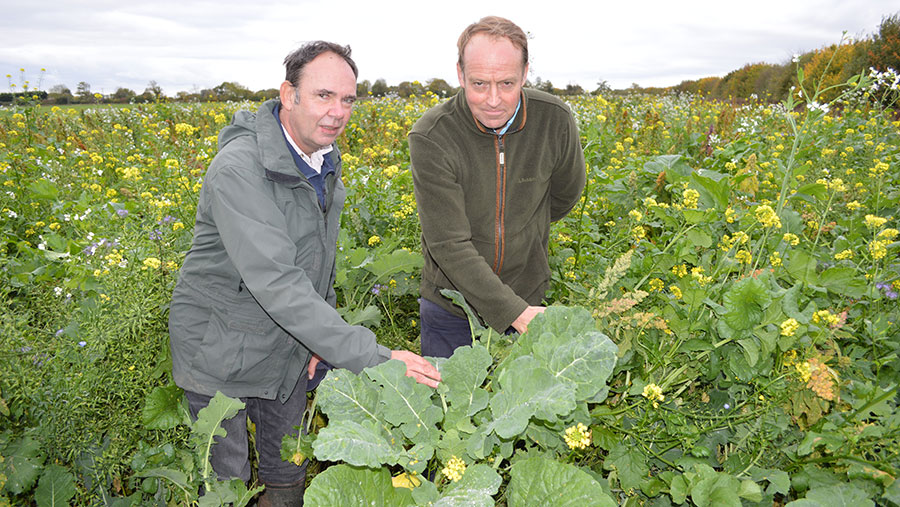 Applying for environmental schemes can be time-consuming and have no guarantee of success, but if approved they can be financially worthwhile, as one Gloucestershire farmer is discovering.

George Ponsonby is looking to boost farmland bird numbers across his land and secure a steady income as subsidies are likely to tumble after Britain leaves the European Union.

He is particularly eager for grey partridges to return to his farm in the south-east corner of Gloucestershire close to the upper reaches of the Thames, and also plan for life after Brexit in 2019.

The answer was an environmental scheme to help him create wildflower corridors across his arable fields and compensate him for the lost profits from giving up growing wheat, barley and oilseed rape.

This has given him a colourful patchwork of yellow-flowering mustard, purple phacelia and white fodder radish to encourage more skylarks, corn buntings and yellowhammers onto his farm.

“I want people driving past to slow down and see picturesque strips of wildflowers in the fields,” he tells Farmers Weekly.

He embarked on a potentially onerous application for a mid-tier Countryside Stewardship Scheme, which came into place at the beginning of 2017 replacing an older environmental scheme. 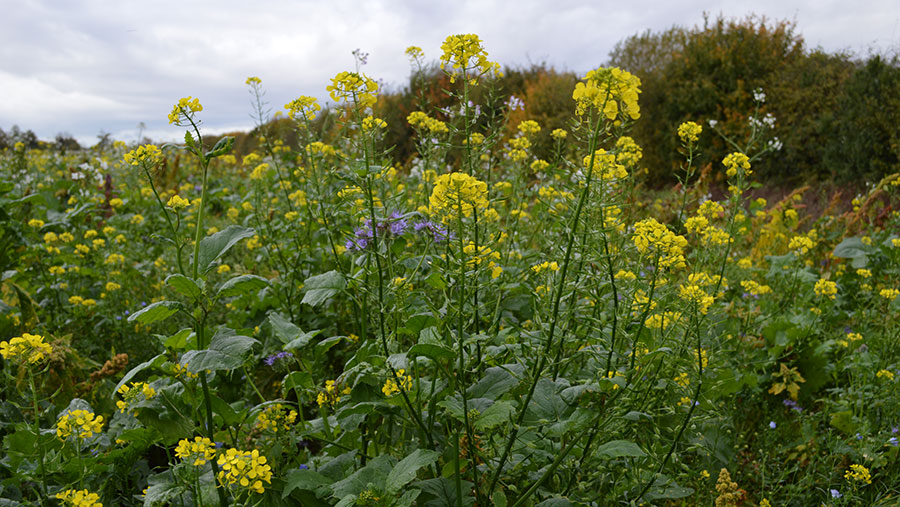 A flowering strip at the farm

He is now in the early stages of creating a habitat around the farm and is hopeful of attracting grey partridges, which are on the RSPB’s red list.

The scheme has taken 22.5ha of his least productive land out of his 210ha farm, and he is being paid £20,000 annually for the five-year scheme.

“The main aim was to help farmland birds such as the grey partridge, and also pollinators such as bees to thrive on the farm,” he says.

This needs careful control of foxes, rats and crows, for which he relies on his gamekeeper Frank Snudden, to protect these valuable ground-nesting birds.

His Great Lemhill Farm, near Southrop, close to Lechlade-on-Thames, consists of gravel soils running to heavier land, and it is wild pheasants that are particularly attracted to this wet ground. Encouraging grey partridges may take longer.

He sees these birds, which are native to Britain, as a barometer for the health of his farm and he is eagerly awaiting their permanent return, particularly as they are sometimes seen in the area.

His approach started with his hedges, which he “reluctantly” cuts once every three years and then an Ecological Focus Area (EFA) 6m margin which consists of grasses and wildflowers.

Mr Ponsonby’s intention is to plant an unharvestable mix of canary grass, chicory and kale to provide good winter holding cover for the birds, and stop them wandering off too far from their nesting sites in the hedge bottoms.

This will give him his EFA requirement for 5% of his arable land to be in farm practices to improve biodiversity, and so qualify for farm subsidies under the Basic Payment Scheme.

This is followed by a 4m wild flower margin which contains fine grasses, such as fescues and meadow grasses along with knapweed, bird’s-foot-trefoil, ox-eye daisy, lady’s bedstraw, wild carrot, selfheal, red clover and chicory.

This will provide brood-rearing cover, full of insects which young partridge chicks need to feed on in the first few weeks after hatching.

This is a permanent margin with an initial seed cost of £150/ha to establish, and the result is a £539/ha payment per year under the scheme. 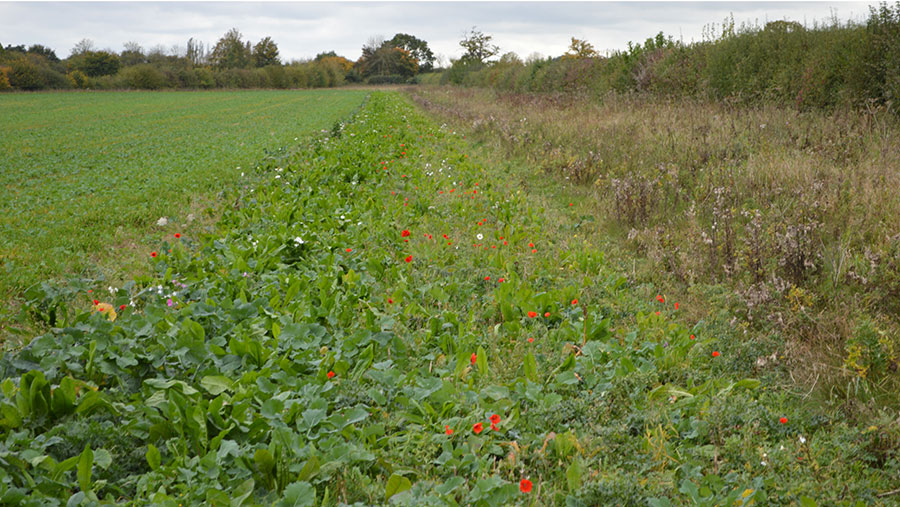 A hedge and two strips

In addition, there are blocks of wild bird cover mixes across his fields to provide seed for adult birds and food sources for pollinators. These would include the likes of kale, mustard, fodder radish, phacelia, linseed and quinoa.

Seed cost for this mixture would typically be £130/ha for the two-year life of this mixture, and the scheme pays £640/ha.

Mr Ponsonby says the cost was a few thousand pounds to get the scheme started in terms of buying seed, but hopes the £20,000 a year over five years will more than compensate.

“In five years time we would like to see the grey partridge return, and would hope to see 20 pairs of birds,” he adds.

In mid-October, a covey of 11 grey partridges was seen on a feeder on the farm, right beside one of the strips of wild bird cover.

This was the first covey seen on the farm for several years and he believes that it is the habitat and his supplementary feeding that has drawn them, giving ample proof that the scheme could hardly be working better.

The grey partridge is present on some of his neighbours’ farms, which he manages, so he sees no reason why they will not hop over the hedge and start to breed on his land.

The other advantage of the mid-tier scheme is that he expected subsidy levels to come down even if Britain had remained in the EU, so he sees this as prudent planning for a steady income in the future.

Mr Ponsonby was advised on applying for the scheme by Neil Harris, technical adviser with Frontier’s specialists seed arm Kings. He previously worked for Natural England which runs the Countryside Stewardship Scheme. 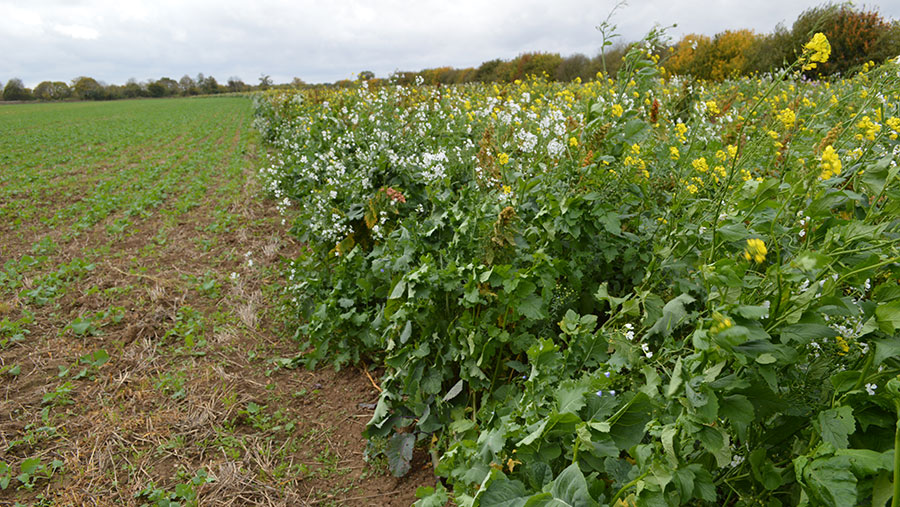 Mr Harris says: “These schemes can be quite onerous to apply for, and because it is a competitive scheme the applications have to be good.”

There was no charge for Mr Ponsonby for an initial assessment visit to explore options, but once he had decided to go ahead there was a consultancy fee for drawing up an agreement calculated on the farm’s size and time involved completing the paperwork.

Once the deal was agreed, Mr Ponsonby received a discount on the seed used to implement the agreement.

Another possible advantage is that with the wild margins harbouring beetle and spiders, Mr Ponsonby hopes these two may do some extra good by feeding on some very unwelcome guests on his oilseed rape – namely cabbage stem flea beetles.

(22.5 hectares taken out of arable production)