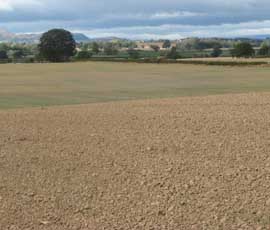 In its latest drought bulletin on Friday (9 March), the agency said last week was the wettest week in England and Wales since January.

Two inches of rainfall fell in the South last week, but it was not enough to reverse the impact of two consecutive dry winters, the agency added.

Water levels at Ardingly and Bewl reservoirs, which supply households in the South-East, remain exceptionally low.

Supplies are plentiful in the North, Scotland and Wales, but water companies in the South and the Midlands have warned consumers to expect hosepipe bans within weeks.

The Anglian region, which has been in drought since the summer, has received almost half its average annual rainfall for March already (47%).

River flows in those areas affected by drought have begun to increase over the past week, but with a return to dry weather river flows will quickly drop again.

“Although river flows have increased slightly, the water underground is still exceptionally low for this time of year. Everyone must play their part by using water wisely.”

Some 14 groundwater sites monitored by the Environment Agency are at “exceptionally low” levels for this time of year.

East Anglia and the south-east of England are in drought and parts of south-east Yorkshire, central and south-west England continue to be affected by dry weather.

It’s anticipated that the risk of drought in the spring and summer in these areas is high, the agency said.

Soil moisture deficits have decreased but remain exceptionally high in East Anglia at 41mm, in the South East 20mm and in the Midlands 15mm.

Helen Vale, the Environment Agency’s national drought co-ordinator, said: “The rain received over the past week has been very welcome in those areas affected by drought.

“Although river flows have increased slightly, the water underground is still exceptionally low for this time of year. Everyone must play their part by using water wisely.”

The Environment Agency will publish its latest drought prospects report on Tuesday (13 March) which will provide the outlook for water resources over the spring and summer, and recommended actions for abstractors, wildlife and public water supplies.

NFU president Peter Kendall said it was now about “making the most of every last drop”, but in spite of the drought, farmers must be given their fare share of water.

View readers’ comments on the drought on our forums