A visit to Cereals 2008 certainly paid off for South Yorkshire farmer John Pearson, after he scooped 100ha of Nickerson Original cereal seed in the Farmers Weekly/Nickerson Direct competition.

Mr Pearson, of D&J Pearson, who farms 240ha of arable and grass at Wentworth near Rotherham, was one of 400 entries. He correctly calculated the number of rugby balls in a McCormick tractor (182 for the record).

He selected Alchemy, Istabraq and Exsept winter wheat plus Carat and Retriever winter barley from the company’s portfolio of varieties.

“This has been a good season for drilling and all the varieties have established well,” said Mr Pearson. “I grow the feed barleys for fattening cattle and pigs, but wanted to switch from six-row barleys, so I chose Retriever, which is a two-row with six-row yield,” he added. 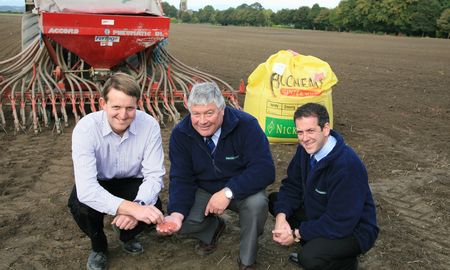 John Pearson (left), pictured with Alastair Moore and Sean Corey (right) of Nickerson Direct, as he prepares to drill the final batch of his prize-winning seed.