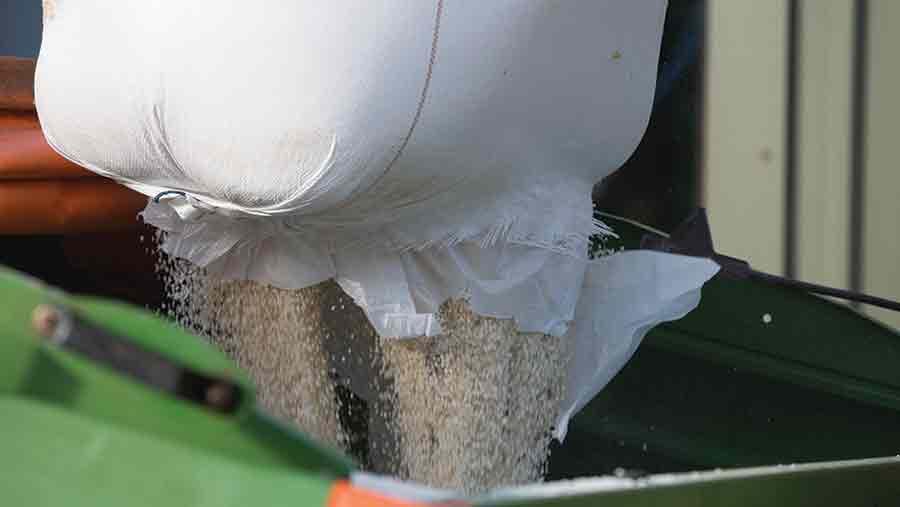 A Suffolk grower is making radical changes to his nitrogen fertiliser strategy in a bid to cut unnecessary costs and simplify operations.

As a result, AHDB monitor farmer Brian Barker has bought just one type of granular fertiliser and will be applying it as blanket treatments across four timings to winter wheat, rather than using the variable rates and different fertiliser products that were previously applied.

His reasons for the change are straightforward. “We looked at the costs and complexities of what we were doing before and decided to try a different approach. Time will tell if it is right.”

He is also abandoning his use of stabilised urea, having had spreading difficulties and inconsistent results. “It was a light product to spread to the full width, so we saw quite a bit of striping in our crops. Given the additional cost over ordinary urea and the disappointing results, we won’t be using it again.”

Mr Barker starts his nitrogen planning with a soil analysis to get an understanding of the availability of soil-supplied nutrients, before calculating the crop’s additional requirement based on plant counts, tiller numbers and crop potential.

Up until now, his “normal” nitrogen regime, based on a five-year average yield of 10.8t/ha, was to make four applications, starting with Double Top (27N; 30SO3) before switching to two applications of urea and finishing up with Nitram (ammonium nitrate).

“That programme applied a total of 230kg/ha of nitrogen and 85kg/ha of sulphur,” he says. “Kieserite for magnesium and sulphur was also tried, with no direct benefit seen.”

He also tried a different programme in 2015, using an additional late nitrogen application, and saw a good response.

“The yield was 12.77t/ha. We followed a similar approach to our normal plan, but included a final application of 17kg/ha of Single Top.”

At harvest, the yield map and sample weight confirmed a response on 10ha in the middle of a 25ha field.

For 2016, he has bought Single Top (27.0.0 NPK), which contains both nitrogen and sulphur, and will be applying 57.5kg/ha at four timings across his winter wheat area. He will also try using just three applications, applying 60kg/ha for the first two timings, followed by a final 100kg/ha.

Both will supply 220kg/ha of nitrogen and 97kg of sulphur – which may be adjusted to crop potential in the spring.

“It will cost us the same for the fertiliser, but application costs will be £12/ha lower with the three splits.”

Micronutrients do have an important role in healthy crop development, believes Brian Barker (pictured below).

“There is no doubt in my mind that certain trace elements can be a limiting factor, so our approach has been that every little helps. But it’s also important to understand when to stop applying them.”

He has done tissue analysis of the most recent leaf for the past five years to get a “snapshot” of what is going on in the plant.

But he admits the results from different fields can be puzzling.

“We were using lots of straights, and were boosting zinc, magnesium and boron levels. It was all quite confusing, so we spoke to Ian Robertson at Glenside to see if we could take a more scientific approach.”

They decided to split a field and apply a full micronutrient programme to one side, but none to the other side. Measurements were taken during the season, to see if micro-nutrient levels within the plant could be affected and to compare yield and quality.

“There were more ears produced with the full programme – 734 ears/sq m compared with 646 ears where no trace elements were applied and had longer flag leaves.”

The final yields, however, did not support the use of the full programme. “We got 10.86t/ha from part of the field that had received the full programme, which cost us £23/ha, but 11.05t/ha without it. We produced extra biomass, which the plant could not sustain, as a limiting factor of late nitrogen and potassium was revealed when the results were analysed.”

Despite this, he still believes in their use. “For 2016, we are going to try a scatter-gun approach, using a cheap product and applying lots of it.