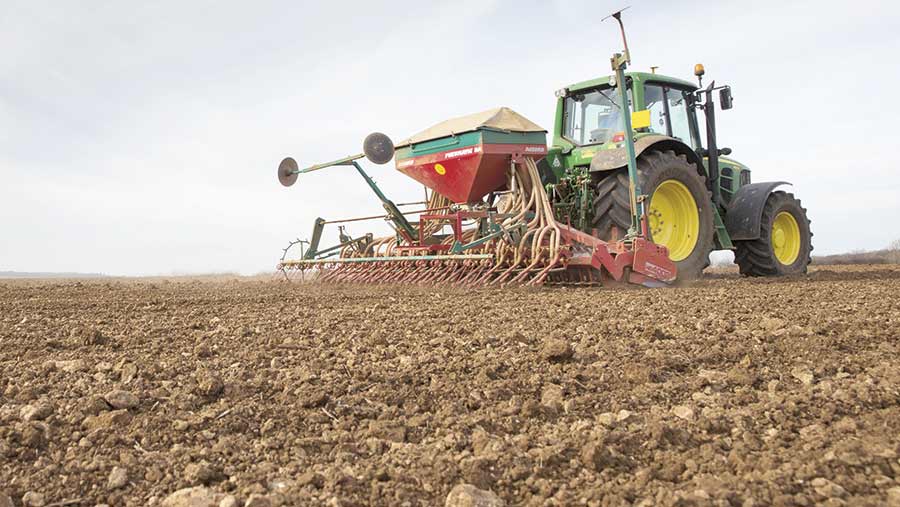 Spring barley growers should aim to apply high levels of nitrogen to their crops this coming season despite achieving disappointing yields last year.

Edward Downing, crop nutrition technical manager at advisory group Frontier, says he stands by this advice despite recognising it was almost universally too much nitrogen for most growers last year due to the dry spring.

New malting varieties such as Laureate and Planet can use high rates of nitrogen, potentially up to 160kg/ha, but growers should use the right level of fertiliser for their particular situation and end market.

Growers in areas such as Lincolnshire who grew the crop for the first time last year could understandably be a bit cautious this year, Mr Downing says.

“My advice to growers this year is don’t overreact. Last year’s yields could dampen enthusiasm for higher nitrogen levels, but it shouldn’t. The crops had no moisture at all, it had nothing to do with the nitrogen level,” he says.

His advice to growers would still be to have one field of 150kg/ha this year to give experience of how a high application will work in your particular situation.

“You can’t farm for those bad years. If you do you are going to miss out on yield in the good years,” he adds.

Conditions coming out of the winter are quite finely balanced Mr Downing said. The country was predominantly warm and dry up until Christmas, keeping soil nitrogen at good levels.

However, since the start of the new year stormy weather and rain has washed some of those nutrients away.

The key will be the condition the crop is drilled into, but it will be at least a month before the likely condition will become clear.

Mr Downing also cautioned against testing soils too early, as the first nitrogen application should be determined by the crop, with subsequent applications based on soil data taken as close to drilling as possible.

However, an early soil test is better than not testing soils at all, as 5% of arable soils are still registering as having a low pH of below 5.5.

This will significantly affect the crops ability to use phosphate, affecting yields.

“We shouldn’t be seeing 5% below a pH of 5.5, it’s not just about nitrogen, we shouldn’t be putting other limits on crops,” says Mr Downing, stressing growers need to focus on all the key nutrients.

Growers with less than ideal pH levels are advised to put smaller but more regular applications of nutrients such as phosphate on their soils.

A higher seed rate has also been shown to have a positive effect on yields. A seed rate of 500 seeds/sq m over 350 seeds/sq m resulted in a much higher biomass and better yields in trials carried out by Frontier last season.

However, a very early drilling date did not result in noticeably better yields, giving growers the confidence to stick with traditional March drilling.

Applications of plant growth regulators have also proved to be beneficial, increasing the number of ears and resulting in no leaning in treated plots of Laureate.

Growers should also look to use a two-spray fungicide programme including the protective fungicide chlorothalonil for ramularia, and not be tempted to trim back and leave too big a gap between the two sprays.