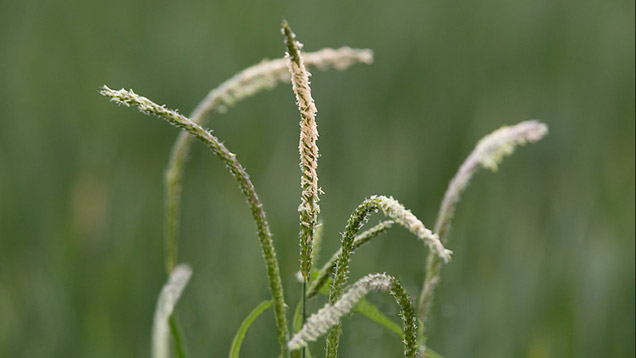 In the past three years, Ruth Stanley has seen blackgrass populations escalate on parts of her 400ha farm and it is now having a significant impact on wheat yields.

She needed to find solutions that work on her own farm, fast and with agrochemical giant BASF looking for someone to host blackgrass trials, Miss Stanley jumped at the chance to look at various control options on her own land.

A winter wheat-based rotation on heavy soils, with no ploughing and early autumn drilling had resulted on a reliance on herbicides to control grassweeds, which is a familiar tale across arable areas of England.

“We have had low levels of blackgrass for some time, but it has really exploded in recent seasons and we’ve had target site resistance confirmed to ACCase- and ALS-inhibiting herbicides,” explains Miss Stanley.

In its first year in 2013-14, BASF’s trial focused on chemistry, looking at 16 pre-emergence and 22 post-emergence treatments on Miss Stanley’s worst field.

Although the programme achieved 95% control, it still left too much blackgrass behind, with the remaining head count about 25 heads/sq m and seed return expected to be in the region of 2,500 seeds/sq m.

Miss Stanley says the programme cost about £130/ha and with wheat at about £110/t; it highlighted the need to find a more integrated, cost effective approach to solving the problem.

“That just isn’t economic and the solution isn’t out of a can anymore, controlling blackgrass is going to be hard – and stressful. Taking that on board, this year the trial has looked at both cultural and chemical control,” says Miss Stanley. 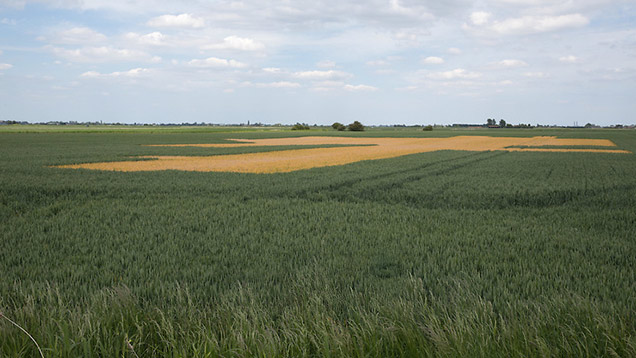 The effect of cultivation and establishment method, drilling date, cover cropping and some differing herbicide treatments on blackgrass numbers were assessed.

Plough-based and min-till cultivation systems were used alongside a direct drill and for consistency of drilling, the same Weaving disc drill was used across all plots.

Comments in this article were taken from BASF’s open day at the 400ha New Farm at Harby, near Melton Mowbray. Ruth Stanley farms in partnership with her father on top of her role as the company’s East Midlands agronomy manager.

KWS Gator winter wheat was drilled on 28 October and 9 December, with the variety chosen for its drill-date flexibility.

A dry autumn meant the ground was too hard to plough until October and planned stale seed-beds were not possible in the early drilled trial, with just one glyphosate application possible before drilling.

A wet period meant the later established plots had to be drilled on a frost, highlighting the challenge that heavy land farmers have, but it did allow an extra glyphosate application.

“If there is one message from the trial, it’s that later drilling and getting as many stale seed-beds as possible is crucial,” says Miss Stanley.

Just one extra application of glyphosate pre-drilling resulted in a much lower blackgrass population, but in the spring wheat plots where three stale seed-beds were possible, numbers were less again.

“We have seen that if you aren’t going to get your late-drilled wheat into good conditions, you are better off waiting until the spring.”
Ruth Stanley, BASF

“We have seen that if you aren’t going to get your late-drilled wheat into good conditions, you are better off waiting until the spring.”

Despite the pre-emergence herbicides used in the trial struggling to give comprehensive control, there was one consistent theme through all the plots.

Where granular herbicide Avadex was added to the stack ahead of a peri-emergence application of Crystal + diflufenican, it provided consistently better control.

“Avadex is making a big difference and it’s something that we can do in one pass, as we have an applicator on our drill. Rates of products need to be kept up too – don’t skimp,” adds Miss Stanley.

The trial has also taught Miss Stanley some lessons on implementing cover crops, something that many growers are looking to do now for soil health benefits and the possibility of aiding with blackgrass control.

“I have certainly learned how not to grow cover crops. We planted the oil radish too late and in wet conditions, so next time we’ll try and get it established much earlier.

“The one positive is that it did take the moisture out of the ground, which is crucial on our heavy land if we are going to establish cereal crops in the spring,” she says.

George Cook of business consultants Andersons carried out a cost analysis of all the plots, estimating gross margin with or without losses from the remaining blackgrass numbers (see table).

All the crops are predicted to make a loss, although some more substantial than others and Mr Cook says it’s a situation familiar to many farms with a high blackgrass burden.

He advises growers to be brave enough to stop seed return, even if it means losing £400/ha in costs, as that loss could multiply many times over the next three years.

“The challenge going forward is adapting to a lower output system which includes spring crops and/or fallows, as it takes time to adjust your cost base – particularly if you are geared up for high autumn workloads with high horsepower machinery.

“Even if grain prices return to a more economic level, grassweeds aren’t going away, so growers need to find a strategy that allows them maintain profit from lower crop sales,” he explains.

“Variety choice plays a minimal part, but getting the right one at the right time is important.

“If you are going to a later sowing, you need a vigorous variety with speed of movement and the ability to compensate from gappy establishment from poor seed-beds.”

“We offer blackgrass herbicide resistance testing and would urge growers to have their populations tested.

“Once resistance is there, it is not going away and you’ll need to get rid of the seed and confirmation by testing will focus your mind on doing that by cultural means.”

“Cover crops can certainly have a role to play in reducing blackgrass and in our trials we have seen oil radish reduce grassweed numbers to almost nothing from both a smothering effect and what looks like an allopathic effect.

“The key to cover crop success is to get them away early to harvest as much sunshine as possible.”

“The more you can improve the structure and drainage of a cold, wet soil to something warmer and more aerobic, the less the blackgrass will like it.

“I also think we can use the expected dormancy of blackgrass seed to make management decisions from year to year and where dormancy is high, go for a cover crop, spring crop or fallow to reduce the numbers germinating in the crop.”

“The take home message from Ruth’s trials is where parts of last year’s trial were sprayed off with glyphosate (due to high blackgrass numbers), you’re farming again.

“A one-year hit has already paid off and it’s something that we’re already doing at home.”

“Everywhere you go, blackgrass seems to be getting worse and we have low levels on our land, despite lighter soils and spring crops in the rotation.

“From the trials, you can see that you have to prevent seed return at all costs and we are getting out with the knapsack and spraying off patches where we can.”