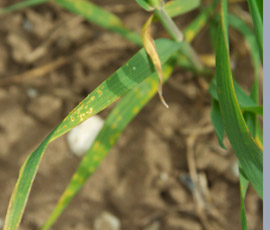 With a higher rust risk this season, SDHIs could offer a greater payback than last year.


Knowing the strengths and weaknesses of different varieties is important, he adds, as a total spend of £90/ha should be enough on less responsive choices.

The very limited responses to fungicides recorded in the east in Recommended List trials in 2011 are unlikely to be repeated this year, he believes. “We only saw a 0.54t/ha response last year, when previous work tells us that it’s more likely to be 3t/ha.”

A wider spread of varieties is in the ground this year, which should help to limit some of the disease risk, he notes. “Having said that, there’s more yellow rust in crops than there was this time last year and there are more brown rust susceptible varieties being grown. So there are differences.”

He predicts that rust will be the disease priority at T0, with eyespot, septoria and rusts all being important at T1.

“Before the SDHIs came along, our programmes were based on a triazole/chlorothalonil mix at T0 and T1, with strobilurins coming into the T2 and T3 sprays, added to a triazole.”

This year, the SDHIs will bring more flexibility, he continues. “There could be a case for adding a strobilurin to the triazole/chlorothalonil T0 spray, for rust control, as well as to the T1 spray. Then an SDHI/triazole mix would form the basis of the T2 treatment.”

Another potential place for a strobilurin would be at T3, on a brown rust susceptible variety, he speculates. “They can only be used twice in the programme, as can the SDHIs. But we have more choices this year, which gives us more flexibility.”

Dave Ranner, technical manager with Syngenta, points out that the new SDHI chemistry has arrived just in time to help with the growing threat of both yellow and brown rust, as well as the need to maximise yields and profitability.

“We know that the SDHIs are going to be a key component of septoria control programmes,” he says. “As well as their long lasting protection, they give excellent green leaf retention and an additional yield benefit of up to 1.4t/ha.”

But their rust control could be equally important this year, he stresses. “Seguris gave the best yellow rust control in HGCA trials work and the risk is high this year. So it’s a good choice at T2.”

He believes there will be a big switch to SDHI use at T2. “Their yield protection could be crucial as costs have gone up. Their use will deliver the extra margin that growers are looking for.”

“There was a much bigger safety net in 2011,” he points out. “Since then, costs have increased right through the structure of the farm business. Added to that, we’re in a period of high price volatility.”

This means that there’s a greater chance of slipping into the red in 2012, he adds. “If an arable farm has a 10% yield reduction this year, for whatever reason, their margin will be completely eroded. So going for yield is going to be very important.”

Crop protection spend is individual to each farm, he acknowledges. “These are high value, high risk decisions. But it’s going to be very important to protect yield and focus on the economic optimum this year.”

If rust is active in crops, there’s a strong case for using a pre T0 (or T0 minus) spray this season, suggests Mr Riley.

“As we come out of the cold spell, if rust can be found and there are obvious foci in crops, they need to be treated,” he says.

Waiting until the second or third week in March, when the T0 goes on, could be too late, he warns.

“Use a triazole with good activity on yellow rust and maintain tight spray timings afterwards.”