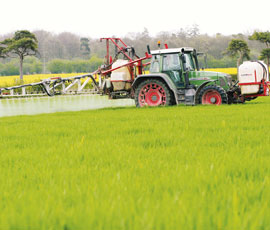 Trials looking for an alternative to sulfornylurea herbicides have demonstrated the value of using a pre-emergence herbicide in spring barley crops to keep on top of weeds next year.

Sulfonylurea-based herbicides have been ineffective this season in spring barley crops, with Mark Ballingall, weed consultant at the SAC, receiving many calls from disgruntled growers who have had poor control of problem weeds.

“Growers were claiming that most of the broad-leaved weeds have been knocked down, but resistant chickweed had been left behind,” he said.

“We have to remember that this chemistry has been around since the 1980s and resistance has been allowed to build up through irresponsible use.”

Mr Ballingall pointed out that if you allow a blanket of weed to establish itself, it will retain moisture in the base of the crop, slow grain drying and subsequently reduce the number of combining hours, which could be important this year.

“Therefore, if you get a little bit impatient and get the combine into the crop, you will end up spending more money on the fuel required to dry it down,” he added.

The use of a cheap residual such as Stomp (pendimethalin) pre-emergence should provide a more robust control of weeds, in particular meadowgrass, which is becoming an increasing problem in spring barley.

“We have also received an extension of use for Liberator (flufenacet + diflufenican) which will be a good option for growers to consider for next season as a residual, pre or peri-emergence,” said Mr Ballingall.

Ramularia resistance on the horizon


Movers and shakers in the barley market