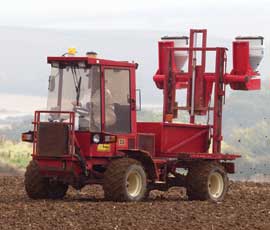 Elevated levels of a key slug pellet pesticide are already being seen in watercourses in some parts of Britain this autumn as slug numbers rise.

The amount of the leading slug pesticide, metaldehyde, in water is above desirable levels in areas of eastern and southern England despite the recent dry weather.

The EU Water Framework Directive limits its concentration in drinking water to 0.1 part per billion (ppb).

Nigel Simpson of environmental body Natural England says these early exceedances highlight the need for growers to be particularly careful this year.

“We’ve seen some in parts of East Anglia and there could be more elsewhere in the country so growers will need to use best practice whatever product they are using,” he says.

Mr Simpson says the problems this year have occurred as growers looked to prevent the slug problems that ravaged crops last year.

“It is a big worry this season. Farmers obviously need to be on the look out,” he says.

Advice on dose and application

Mr Myram adds that because reservoirs contaminated last year will still contain metaldehyde it will not take much extra to surpass the limit.

“As far as treatments are concerned it would be advisable to use the lowest dose possible and move towards the 1.5% metaldehyde products at 4kg/ha,” he says.

Mr Myram says going at a lower rate will allow growers more flexibility and the option of making further applications before exceeding limits.

He adds growers need to try and preserve one of the most effective slug pesticides rather see more restrictions due to water quality worries.

“About 80% of the products contain metaldehyde so it is vital we look after it, ” he says.

The MSC stewardship guidelines suggest measures such as to avoid applying pellets when rain is due, and not within 6m of a water course and not to exceed 700g metaldehyde per calendar year.

Agronomist David Glenn of consulting group Styloma says although the threat is reduced from last year’s wet weather there is plenty of slug activity out in the fields.

“The mild conditions and moisture has meant numbers are building up fairly quickly and there are a lot of young ones about,” he says.

Dr Glenn says most of the oilseed rape crop will have grown away from any slug problems with winter wheat now the biggest threat.

“They affect barley and oats as well but to a much lesser extent with wheat the highest risk particularly in cloddy seed-beds,” he says.

He advises an application of slug pellets as soon as possible after drilling and rolling.

Tips for better use of slug pellets this autumn

Brush up on your slug knowledge, including their life cycle and tips on achieving effective control with our free online course Slug Academy