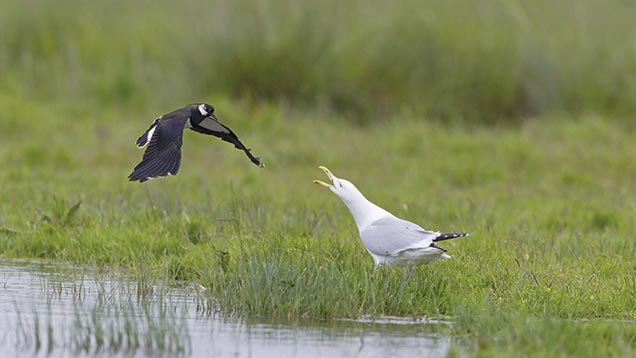 But its uptake could be limited to just one-third of English farmland, warns Peter Thompson, farmland biodiversity adviser for the Game and Wildlife Conservation Trust (GWCT).

Defra admits that, due to budget constraints, the new environmental land management scheme (Nelms) will be targeted at areas with high levels of biodiversity or soil and water conservation measures, and probably those who are already in the voluntary Higher Level Stewardship scheme.

Mr Thompson worries that restricting further entry could not only reduce the national success of wildlife revival, but it may see the UK fall short of its EU 2020 biodiversity targets.

“Estimates point to funding focusing on just over one-third of England’s farmland, leaving about 60% potentially out of the scheme. We are keen not to waste the opportunity to see widespread nature reform and to help small-scale farmers into the bargain, so we have a plan.

“To raise the environmental stewardship bar higher, we believe the answer is to set up farm clusters to provide landscape-scale benefits. We have extended the idea developed by Sir John Lawton in his Making Space for Nature report, which concluded that together, land stewardship could be bigger, better and more joined up. Clusters could make it faster, too.”

Fifteen months ago, the GWCT put in a proposal to Natural England to fund a pilot scheme to involve groups of growers in an area working together to protect soil, watercourses and biodiversity. It had previously helped to set up a grower-led scheme, the Marlborough Downs Nature Improvement Areas, which is still running very successfully.

Mr Thompson was lucky enough to secure funding to start four farm clusters in the south of England. He was surprised how straightforward it was to set up the pilot project, and how willing growers were to join with neighbours to make larger catchment areas, despite there being no remuneration.

The incentive was the chance to qualify, as a cluster, for the new stewardship payments when the time comes.

“We carefully chose four keen, environmentally-minded farmers to take responsibility for uptake in their cluster area. We offered wildlife conservation advice to the group, but basically encouraged members to organise themselves and use their own advisers.”

In its second year now, each cluster has between six and sixteen farms. Those involved are mapping their boundaries and making records of resident species monitored by different wildlife organisations.

The grower “club” makes its own decisions about how to enhance the landscape, adapting what is already there and adding new features. It dispels the common myth that farmers don’t work well together, he stresses.

Features expected to attract funding for stewardship include in-field options such as wild bird seed mixtures, pollen and nectar mixes and soil and water protection measures. Each cluster will choose an adviser to help with payment applications.

“It can be quite complicated to design benefits across a shared area, for example when making a green corridor between adjacent farm’s woods. But working together will certainly benefit the landscape. Everyone involved is totally committed and confident in the initiative,” says Mr Thompson.

He has funding to continue the project until next summer, so he plans to develop a new cluster in Somerset on top of the four existing areas in the Cotswolds, Sussex, Hampshire and Northamptonshire. This fifth cluster will bring in another dimension – grassland.

Reap the rewards of farm management that improves biodiversity

It’s easy to find growers keen on fluffy bunnies and butterflies, but Mr Thompson chose the lead farmers in the pilot project for their experience and efficiency as producers as well as wildlife ambassadors.

Cotswolds cluster leader Mark Tufnell is already reaping the benefits of years of nature conservation on the 778ha Calmsden Estate near Cirencester. He has managed it with biodiversity in mind, and has plenty to show for it.

Key species include grey partridges, brown hares and the small blue butterfly. The farm is a stronghold in the Cotswolds for corn bunting, while lapwing, yellowhammer, skylark and linnet all breed there in good numbers.

About 13% of the farm is in environmental measures, including ELS, HLS and Campaign for the Farmed Environment schemes. He very much hopes to qualify for Nelms when the time comes for renewal, says Mr Thompson.

Mr Tufnell welcomes the opportunity to extend nature conservation across the local landscape. Within his cluster, covering 6,183ha in total, there are 16 units, including an organic farm.

“Some of the farms might be too small to stand alone, or have insufficient measurable environmental benefits to qualify for the new stewardship scheme, so cluster farming could help on that front. And Natural England sees the landscape-scale nature of it as offering more value for money in conservation terms, and that can only be good for wildlife,” concludes Mr Thompson.