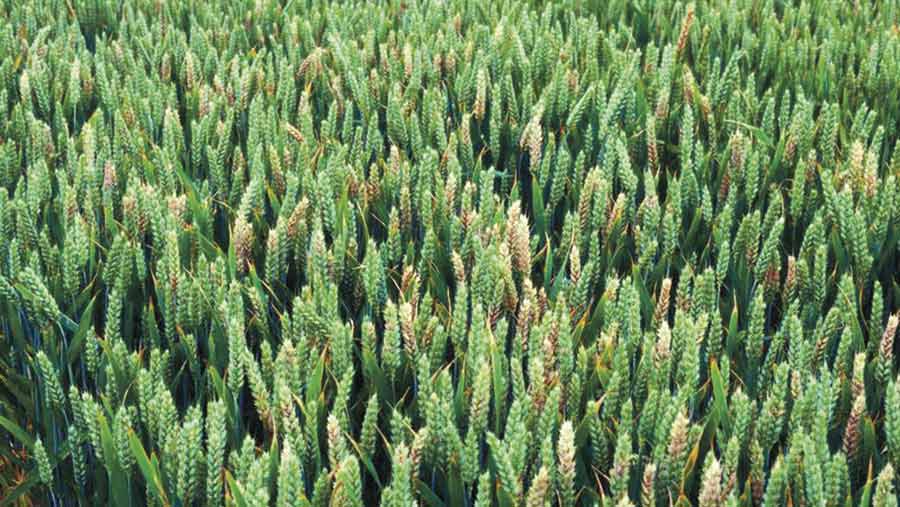 © The Food and Environment Research Agency

Exceeding the EU limits for certain mycotoxins can result in wheat being rejected for human use, leading to the loss of valuable premiums.

However, not all fungal species that cause ear blight produce mycotoxins and being able to identify what species if any are present in crops before harvest will enable farmers to segregate grain from high risk fields.

This avoids cross contaminating grain from clean fields, thereby keeping the financial impact to a minimum. Here we look at the key species including the symptoms and mycotoxins produced.

There are two key species of microdochium that produce fusarium ear blight symptom  (M nivale and majus), with neither producing mycotoxins. Early season, they produce browning at the stem base and towards the end of May, produce perithecia [fruiting bodies].

“For example in the last high pressure year of 2012, stem bases were covered in perithecia.” 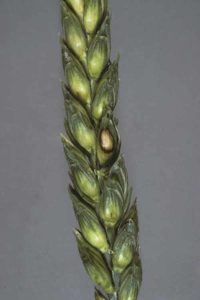 These perithecia then produce ascospores which are wind-dispersed and can spread about 10m, landing on leaves and ears. However, moisture must be present for them to be released and a dew can be sufficient for this to occur.

Given the right conditions, the ascospores cause ear infection. They rarely cause a problem on leaves, but can in very wet seasons like in 2012.

Ideal conditions for ear infection are similar to those for fusarium: wet and humid at flowering. However, one key difference Dr Jennings points out is that microdochium can cope with cooler temperatures, 15C instead of 18-20C for fusarium.

Ear infection is seen as the characteristic bleaching, but unlike fusarium, it does not progress up the ear. One spore will affect just one spikelet.

However, Dr Jennings adds that you can still end up with a whole white ear, when there are multiple infections.

“Where the whole ear is bleached, the way to tell if it is due to fusarium or michrodochiom is by looking at the rachis [centre spine of an ear]. This will stay green with microdochium while fusarium progresses up the ear turning the rachis white too. 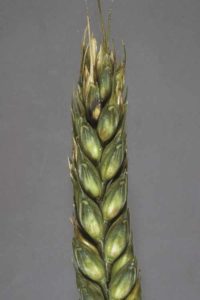 When examining the grains, they may appear slightly shrivelled, but still look relatively healthy. In fact, it can be difficult to tell there is a microdochium infection by just looking at grains, as there is no pinking or whitening as seen with the fusarium species, he explains.

These two important species are similar in the way they look on the ear, but he points out that they develop differently.

It is rare to see Fusarium graminearum at the stem base, but F culmorum is a secondary coloniser. “Crop Monitor data has shown that microdochium is generally isolated from the stem base during early spring (April onwards), but culmorum isn’t normally isolated until early May.”

Culmorum macroconidia develop on crop debris and these are spread by rain splash, says Dr Jennings.

“They need rain and it is where the saying ‘good rain for fusarium’ comes from.” He adds that as they are splash-carried, they will generally spread about 1m. 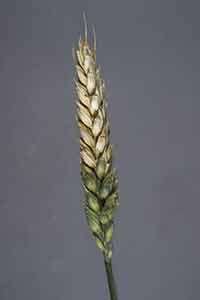 Don producers lead to the characteristic white bleached ear, with a single infection resulting in the ear above it turning white. But as mentioned earlier the rachis is also bleached.

The mycotoxin is mostly produced in the chaff following infection at flowering and is transferred into the grain by water. As the grain ripens(GS80 onwards), it becomes more hydrophilic.

As Don is water soluble, it is taken up by rain and transferred from chaff into grain. As the grain dries, the toxin is left behind.

“This is why rainfall from growth stage 75 onwards can make a big difference in mycotoxin levels in grain.”

He points to 2007 and 2008, which were similar years in terms of infection caused by Don-producing species, but saw a big difference in mycotoxin levels as 2008 was a wet season.

“They were very different mycotoxin years despite similar infection.”

In contrast to Don, Zon is produced later in the season particularly when harvests have been delayed because of wet weather.

“Where delays to harvest are sufficient that the starch in the grain begins to be broken down into to sugars, this leads to secondary colonisation on the grain and hence the pink grain.

“If you see pink around the embryo chances are there is a zearalenone contamination,” he says.

Perithecia need a warm dry spring to develop, with water during late May to fully mature and release ascospores. Unlike culmorum, it doesn’t need heavy rainfall to spread. A heavy dew can be sufficient for ascospores to be released from perithecia.

Key F graminearum hotspots are down the east coast and around The Wash area.

There are some other less important species including Fusarium poae and langsethiae. They prefer dryer conditions to infect at flowering and, therefore, tend to be seen when the other fusarium ear blight pathogens are lower.

Both are not really an issue in wheat, but langsethiae can be a problem in oats producing the mycotoxins HT2 and T2, he says.

Four key species at a glance