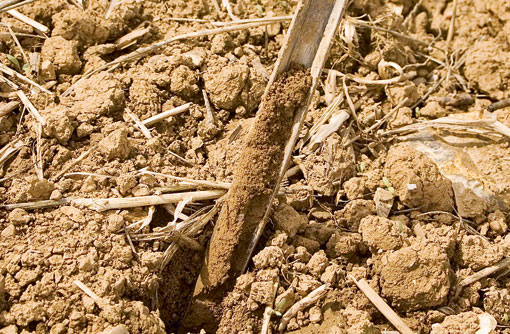 For fields that are highly fertile or have an unknown history, soil mineral nitrogen (SMN) testing has been the tool of choice. DEFRA’s Fertiliser Manual (RB209) recommends it and many experts and agronomists favour it in these situations.

But SMN testing has been the subject of debate for years – not least whether it should be used solely on high N fields, or more widely. When and how to sample and subsequent treatment of those samples have also been areas of concern, largely due to a lack of consistent industry guidelines.

However, a recently completed HGCA project that aimed to establish best practice for estimating soil nitrogen supply is producing some valuable new advice.

The three-year study, which covered 180 cereal sites from southern England to Scotland, confirmed that SMN testing is best used on sites with a high or uncertain soil N supply, rather than in a normal arable situation, says Stuart Knight, director of crops and agronomy at NIAB TAG, one of the project partners.

High soil-N sites include fields following grass or high N vegetable crops or that have recently received manure, especially on retentive deep clay or silt soils. On such areas, assuming a grain price of £150/t and an AN price of £300/t, the most thorough spring SMN test returned an average of £8/ha extra crop profit (before the cost of SMN testing) over RB209’s simple field assessment method.

This particular SMN test sampled to 90cm in spring and allowed for additionally available nitrogen (AAN) – the extra N that would become available to the crop as it mineralised over the rest of the season – as well as adjustment for leaching. The field assessment method uses book values in RB209 of soil type, previous cropping and winter rainfall to establish soil nitrogen supply.

When the two were compared on normal arable sites, field assessment proved just as effective as the best SMN test. In terms of crop profit, the average difference between the two techniques was less than £1/ha (before the cost of SMN testing), says Mr Knight.

“In a normal arable situation SMN testing is unlikely to pay. But on sites where for example it would be recommended in RB209, we see a bigger advantage in its favour.”

Tests that included an estimate of AAN and other adjustments delivered a better profit margin than straight SMN tests. For those sites where SMN testing would be recommended, the best spring test described above delivered an £11/ha profit advantage over a straight SMN test carried out in the spring. In the autumn, the benefit from adjustment was much smaller.

As far as timing is concerned, the spring best test had a £1.60/ha edge over its autumn equivalent. “Overall, sampling in the spring gives slightly better prediction of soil nitrogen supply than sampling in the autumn,” says Mr Knight. “But on clay and silt soils the differences are quite small, so autumn sampling is fine.”

When it came to sampling depth, 60cm was found to be adequate in autumn tests. “Essentially there is no benefit from sampling any deeper as N below 60cm is likely to be lost from the system. In the spring it is a different story – we have to go to the full 90cm.”

Sampling technique was also scrutinised. As expected, results showed that more cores were justified as soil nitrogen supply and/or field size increased. “However, 10-15 is optimal for most situations,” says Mr Knight.

The need for care with mixing prior to sub-sampling was made clear by the study. Some degree of mixing was justified to ensure that a representative sub-sample could be obtained. However, this also threw up an unexpected effect. “Thorough mixing lasting 20 minutes actually increased the amount of SMN in several cases – we were stimulating mineralisation. Make sure the sample is representative – but don’t overdo it.”

The project also highlighted the need to get samples analysed as quickly as possible. As expected, levels of measured SMN increased significantly in samples kept at room temperature over time, but a steady rise was noted for samples even when kept in the fridge at 2-4°C, in line with current advice.

“It’s been a perception in the past that you can keep samples in the fridge as long as you like,” says Mr Knight. “That’s not true – It is really important to get them analysed quickly. Average SMN increased by 2.5kg/ha per day over 90cm so samples taken early on a Friday, kept over the weekend and not tested until late Monday could end up with 10kg/ha more SMN then when originally sampled.”

Even freezing had its problems. Although this minimised the increase in nitrate, ammonium levels rose enough to produce a result in line with not freezing. “Freezing is not the answer – it just shifts the problem from one area to another,” says Mr Knight.

Fertiliser manufacturer GrowHow, which led the way with SMN testing back in the early 1990s, has adapted its N-Min service in response to the project’s findings.

The firm’s arable agronomist Allison Grundy says the service, which already includes an AAN estimate, will be more accurate as a result.

Previously, a calibration model was used to estimate soil N in the 30-60cm profile. N-min will now sample to 60cm to improve accuracy.

That depth will stay as the N-Min standard, says Ms Grundy. “The project showed very best estimate was from N-min sampling to 90cm. However, 60cm is satisfactory and is a more user-friendly practical solution.”

A 90cm service would be introduced for those who wanted to go deeper, particularly on farms with high organic matter, peaty and deep silty soils, as well as those with high grass and vegetable residues.

Ian Turner of Envirofield is adapting his soil analysis service in the light of the project’s findings. He already samples to 90cm, but after striking an agreement with GrowHow will now offer an AAN estimate, which he believes will improve accuracy on high organic matter soils.

“We’ve always held the view that where farmers have uncertain levels of soil nitrogen then testing is the way forward. We knew RB209 field assessment works pretty well on normal arable soils – as it is made up of averages it is not that surprising.

The HGCA report suggests that SMN could be used as part of “farm N profiling”, but it did not formally test or recommend this approach.

Daniel Kindred of ADAS, who led the HGCA project, suggests that SMN sampling may be a useful tool for farmers to check whether RB209 predictions are right for their farm, but cautions against putting too much confidence in single estimates of SNS. “Monitoring SMN, crop canopies, lodging, yields and grain protein can all help in judging whether N levels are about right.”

Another area of concern has been perceived variability within and between lab testing. However, the project found little cause for concern – although there were some differences, these were relatively small compared with inherent sample variability, Mr Knight notes. “We had a very proactive approach from the labs and they continue to work together to ensure that consistency continues.”