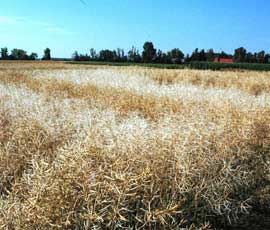 Oilseed rape trials in Hungary have highlighted the value of pod shatter resistance, after a heavy storm hit in the middle of combining.

“We lost a lot of seed. However, it did allow us to get accurate before and after yield measurements across all the varieties.

“And the differences were stunning, putting some hard financial facts behind the pictures we took immediately following the storm.”

The firm’s main UK hybrids – Excalibur, DK ExPower, DK Excellium, DK Extrovert and DK ExStorm lost 30% of their yield on average – dropping from 4.5-5t/ha to around 3.5-4t/ha in each case.

“In contrast, the five pod shatter susceptible commercial varieties we grew amongst them in the trial plots were hit to the tune of 74% – down from 4-4.5t/ha to little more than 1t/ha,” said Mr Mudhar.

Of course, such a heavy storm was an extreme example of what could happen, he added.

But it did underline the value of good genetic resistance to pod shatter, reducing subsequent volunteer problems as well as yield losses.