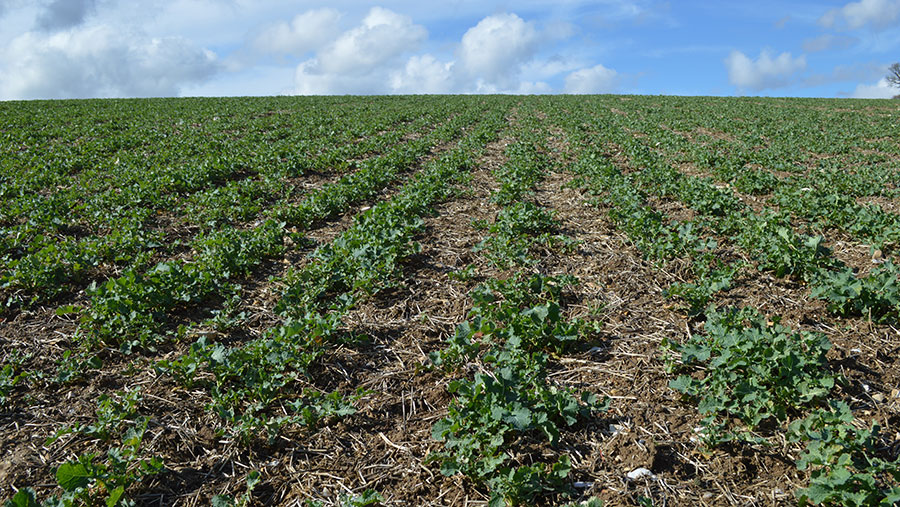 A Hampshire oilseed rape crop is looking surprisingly well despite being sown almost a month later than usual after a kind winter compensated for the delayed drilling.

Michael Maxwell manages 800ha of land at Preston Farms, near Basingstoke, of which 162ha is oilseed rape cropped this year.

A 27ha field of Clearfield Imperial variety, however, wasn’t drilled until 15 September due to the difficult harvesting of the previous winter barley crop.

Mr Maxwell was very sceptical of how the crop would fare, but has been left pleasantly surprised by its performance, also explaining it avoided partridge trouble over the winter period, a re-occurring problem for many of his crops.

Independent agronomist, Ben Burrows, who has worked very closely with Mr Maxwell since the drilling took place, feels it is looking well despite the challenging months it faced.

“We have to be very pleased with how it has done, the kind autumn has certainly helped it overcome the challenging early conditions.

“The nitrogen should have really been on to it three weeks ago, although it still doesn’t look too desperate for it.”

Mr Burrows also described the plants as being yellow/purple in colour shortly before the winter snap arrived, but the snow helped it perk up by protecting it from the lowest temperatures.

“There is a strong plant population, good airflow through the canopies and plenty space for it to branch out. I’m really happy with how the crop is looking at this stage, especially with everything going against it early doors.”