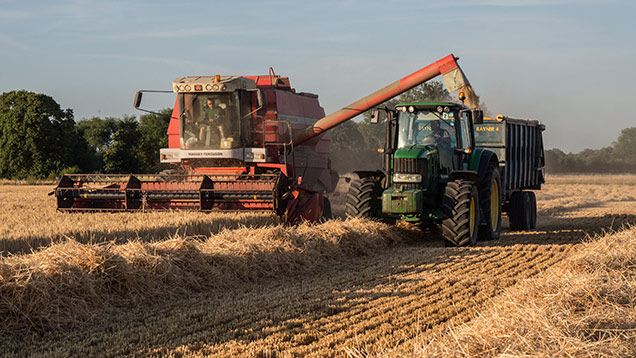 The early start to harvest in east Berkshire ground to a halt this weekend after the first significant rainfall fell in the county since early May.

Two combines and a dry week enabled farm director Colin Rayner and his team to cut Cassia winter barley and also make a start on some winter oilseed rape.

“It was yielding at 3.65t/ha. That was on a 10ha field. We then went into another 18ha field of Charger oilseed rape.

“That was yielding slightly less at 3.3t/ha. But we did have some flood damage in one corner of the field, which would have lowered the yield.

Moisture content was between 6% and 9% for the rape and the crop was put through a dryer on Sunday (12 July).

“We cut some Sequel but it was not quite ready,” added Mr Rayner.

“Our team finished harvesting at midnight on Saturday.

“Then on Sunday morning we woke up to rain – our first significant rainfall since the second week of May.”

Mr Rayner said the decision to start harvest early was based on the thinking of his late father.

“He used to tell me: ‘If the sun is shining and it’s 90C and the crop isn’t quite ready, you should go and cut it because you can guarantee it will rain the next week’.”

On Monday (13 July), his team was muck spreading and baling and loading straw to sell locally and to livestock farmers in Wales.

“The straw merchant said the farmers who are buying the straw don’t have the money to pay for it.

“With the milk price falling as much as it has, it’s no surprise.”

Over the border in Hampshire, harvest has yet to begin for the vast majority of farmers.

Robin Appel, managing director of Robin Appel, an independent grain and seed merchant based in Clewers Hill, Southampton, said the first samples of Maris Otter barley had been sent in at the end of last week.

“A big crop of Maris Otter two-row barley was due to be cut on a farm in Dorchester on Friday [10 July],” said Mr Appel.

“There is a little bit of barley being cut, but not a lot. The rain will hold things up until Wednesday/Thursday.

“The first samples are not championship-winning barley, but you never expect them to be. They will get better as it goes along.

“The barley harvest is potentially looking good. There is just nothing to get your teeth into at the moment.”

“We cut about 70 acres of barley on light land on Friday. It was yielding about 6.25t/ha at 13.5% moisture,” said Mr Blenkiron, a Farmers Weekly Arable Farmer Focus writer.

“But we have been rained off since Saturday. The rest of it [barley crop] is on heavier land and at least a week away from being ready.”

Why not upload your pics to our Harvest 2015 gallery? Also, contact the news desk with your harvest updates and related stories on 020 8652 4905.