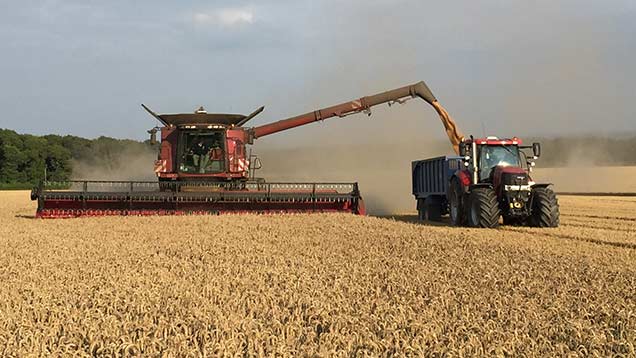 Sent in by Melanie Jenkins

Rain is severely hampering harvest progress across most of the country with some growers now concerned for the quality of standing crops.

The weather is of particular concern in the West and North, and is tempering the optimism of the good yields seen from winter barley, oilseed rape and early winter wheats.

Harvest has been a stop-and-go affair for John Moss at Howton Farm, Saltash, Cornwall, but yields and quality were encouraging.

“Yields have been the best we have ever had for oilseed rape and barley. We have started on the wheat and that is doing well so far,” says Mr Moss.

Oilseed rape has yielded 3.7-4.7t/ha with the variety Trinity doing well in comparison to Harper. Barley has yielded 8.6-9.6t/ha, which he says is exceptional.

“There were a few glitches but even the poorer crops have done better than we imagined,” he says.

There was still some Diego, Relay and more Revelation to cut, but there is some concern that the damp and humid conditions could affect the quality.

Mr Moss says that straw had been a nightmare to get dry.

“The prices have been so disappointing that it is not worth the effort to dry and bale so I just chopped a field of good oat straw the other day,” he says.

In Herefordshire, rain had meant that Craven Grain have only had two days of intake over the past week, according to Dale Payne. Harvest has been very late and very wet with the forecast not set to improve over the next week.

“There has only been 15,000t in so far but what has come in has been good quality,” says Mr Payne.

Wheat quality was very good with bushel weights of about 82kg/hl. The variety Diego did  particularly well, and no feed wheat had bushel weights below 74kg/hl.

The winter oat variety Mascani performed consistently well, but Gerald quality has been rather variable, he adds.

Oilseed rape yields were good at between 4.4t/ha and 5.1t/ha with crops coming in clean but oils were not as good as expected at about 42%. However, some growers were still waiting to combine oilseed rape.

“There are no concerns that rain will affect the quality at the moment, but it is just very frustrating,” says Mr Payne.

Rainfall has been holding up harvest in Lincolnshire, according to Dan Murphy from Woldgrain.

“There is very little coming in at the moment. We have had several loads today (21 August) but that is all we are expecting,” he says.

Milling wheat are of exceptional quality so far with proteins up to 14.3%, bushel weights up to 85kg/hl and good Hagbergs.

However, he doubted whether the quality of the wheat left to come in would be as good.

“The forecast is not looking good which could have consequences for the Hagbergs of the remaining group one and two wheats. If spring barley is not in soon then there is potential for pre-germination problems,” said Mr Murphy.

In Kent, harvest is about 80% complete and has been very compressed, according to John Smith at Weald Granary.

“We have had in three weeks what usually takes six, so there has been added pressure for lorries,” he says.

Wheat yields were very good with protein contents higher than last year, but the Group 2 variety Panorama did not look to have done particularly well.

Hagbergs were all about 320-350 with Crusoe performing best of the group one wheats and Cordiale the best of group two varieties.

“There has not been much low-grade milling wheat with most meeting the standard,” says Mr Smith.

Beans were also starting to come in, with 5,000t of Wizard and Fuego delivered so far, but Mr Smith anticipated that more will arrive over the next seven to 10 days.