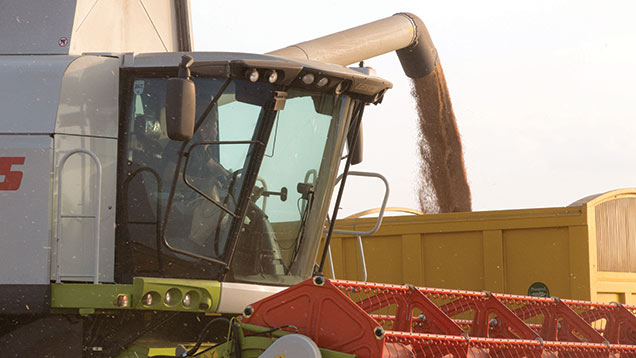 Wheat yields are up to 10% higher than the 10-year UK average, bringing a welcome boost for businesses suffering with the low cereal prices.

However, only half of the UK harvest was complete as Crops went to press and rain in the second half of August was likely to have an impact upon the remaining crops left in the field.

Winter wheat yields appeared to have benefited from the spring drought, with some exceptional crops, particularly in southern and eastern areas. This includes the record-breaking 16.5t/ha set by Tim Lamyman in Lincolnshire last month.

Further west, harvest had been hampered by rain and in the North, many wheat crops were still several weeks away from being ready.

“The Scottish Borders just managed to get some dry weather at the end of August and the combines were up and going, but the wheat crop still in the field was starting to look a bit grey in places, with milling wheats a particular concern,” says Agrii’s David Neale.

Wheat at a glance

However, in general the year has been favourable, with lower disease pressure and decent weather up until early August.

“The high yields are some consolation for current prices,” says Mr Neale. “There are crops of up to 15t/ha, with a lot ranging from 12t/ha to 15t/ha.”

Storage was likely to be an issue with stores filling up fast and plenty of crops still to be cut in early September. “There could be considerable challenges in terms of space.”

In Kent, this year’s harvest had been very compressed, according to John Smith at Weald Granary. “We had the same amount delivered in three weeks that we usually get in six, so there has been added pressure for lorries.”

Wheat yields were very good with protein contents higher than last year, but the group 2 variety Panorama did not look to have done particularly well. Hagbergs were all around 320-350, with Crusoe performing best of the group 1 wheats and Cordiale the best of group 2s, he says. “There has not been much low grade milling wheat with most meeting the standard.”

According to the ADAS harvest report, winter wheat harvest was about 45% complete by 27 August, with early indications suggesting that yields were above the UK’s 10-year average. As Crops went to press, yields were averaging between 8.3t and 8.6t/ha, which was 6-10% above the 10-year average of 7t/ha.

Milling wheat had yielded well, with typical yields between 7t and 12.5t/ha – although that data was biased towards early maturing varieties and those crops harvested in the Eastern region, said Sarah Wynn, senior consultant at ADAS. “Yields of feed varieties were also very good, typically ranging between 7t and 15t/ha.”

Early quality was good with specific weights averaging 78kg/hl, proteins averaging 12.6% and Hagbergs typically ranging from 220 to 310, with an average of 295. However, rain from the middle of August onwards had raised concerns that the remainder of the crop might suffer, with particular focus on milling wheat quality.

Hard group 4 varieties that had done well this year included Gator at 106% of the control, Kielder and Santiago at 105%, Evolution and Costello at 104% and Relay at 103%.

“Looking at the yields of the quality groups, the nabim group 1 varieties Skyfall at 102%, Trinity at 100% and Crusoe at 99% all look favourable,” said Dr Oxley.Group 2 varieties that stood out were Lili at 101% and Cubanita at 100%, while the group 3 biscuit quality varieties that had done particularly well were Britannia and Icon at 105%.

“Of the candidates, Siskin, a potential bread variety, has been very impressive with yields similar to feed at 109% of the control but it is difficult to say for sure this early,” adds Dr Oxley.

“So far wheat has been good across the board with high yields, and the gap between quality and feed is closing up, but we will get a better feel for things once more data is in,” he added. “Things are looking promising at this stage, particularly among the group 3s. It will be interesting to see if there is a big gap between first and second wheats.”

Rob Munro, managing director at Fengrain, said yields had been pleasantly better than anticipated this year. “Yields have been at the top of the five-year average in East Anglia and quality is pretty good, but it is now a case of waiting on the wheat crop after the rain.”

Initial progress had gone well but the rain interruption was a disappointment. “There has been no rain damage reported in the area but I heard that fusarium and sprouted grains are starting to be an issue further north.”

Yields had ranged between 8t and 10t/ha in the area, with specific weights of 78 to 80kg/hl, said Mr Munro. Hagbergs had been excellent, but proteins were lower than expected. “It has been a vintage crop for size and quality so far with varieties appearing to be uniformly good,” he added.

“The disappointing prices and the sluggish export activity could be a reflection of the bumper yields, but farmers do not want to move crops and storage for the year is likely to be an issue.”