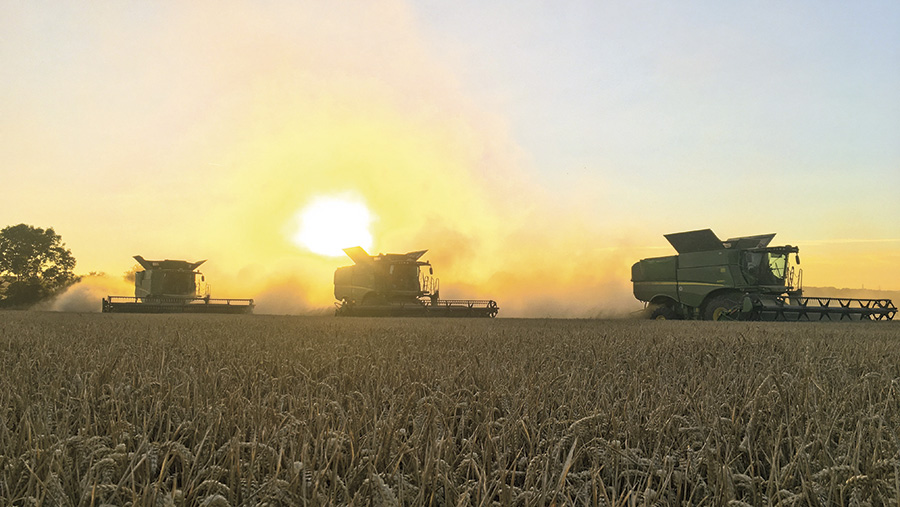 The spring barley and wheat harvest is in the early stages in Scotland with growers tending to focus on malting barley crops with mixed weather expected over the next week.

Spring barley combining is progressing well, with nitrogen and screening levels fairly low, while only the odd field of wheat is being cut in the Angus region, according to Trevor Harriman, general manager at Scotgrain.

“The main crop is spring barley, which is about quarter of the way through. Quality is good with the vast majority meeting malting specification, but yields are a bit low,” says general manager Robin Barron.

Nitrogen levels are about 1.4% on average and screenings are in the 5% area, and while skinning can be a problem in spring barley, it seems to be in check this year, he adds.

Further south, the wheat harvest is picking back up in Lincolnshire after a break due to rain, according to Dan Murphy, laboratory and haulage manager at Woldgrain.

The store has received almost 19,000t of wheat so far with quality coming in surprisingly high.

Specific weights have been fine, with only a handful of feed wheat under 72kg/hl, Mr Murphy adds.

“Some wheat has been remarkably good, with a delivery of Crusoe achieving 84kg/hl and 14.3% protein. It has been mixed but nothing is below specification on milling Groups 1 and 2,” he adds.

Hagbergs on Group 1 milling wheats have ranged from 230 to 450 with some very high, but nothing is dramatically low.

Most of the spring barley cut and coming into store has been the malting variety Propino.

“It is fairly mixed but specific weights and germination has been good. Some nitrogen levels are a bit higher than expected but are on the border of acceptable,” says Mr Murphy.

In south-west England, Devon Grain has received some good samples with the feed wheat being particularly high quality.

“The wheat quality has been better than the barley, with some exceptional specific weights,” says store manager Duncan Lyon.

Many grew Skyfall or Crusoe, which averaged a specific weight of 77kg/hl and a moisture content of 15.9%. Feed barley averaged 63.1kg/hl and 15.5%.

“We’ve got about 40% of the oats still to come in so farmers are by no means finished, but what’s in so far is looking reasonable,” says Mr Lyon.

On farm, James Stafford was cutting the last 3.6ha of wheat this week to finish a pleasing harvest at Pickwood Lodge, Corsham, Wiltshire.

His V3160 oilseed rape variety disappointed with a yield of 3.7t/ha, but the cereals have been more impressive, with winter barley variety Cassia achieving a yield of 8.6t/ha and a specific weight of 64kg/hl.

Mr Stafford’s wheat was a combination of Diego, Reflection and Revelation varieties and so far it has averaged a yield of 8.9t/ha.

“So far the Reflection has performed the best and the Revelation has been the worst, but we’ll know more when it’s finished,” he says.

“We started cutting in the morning when the moisture was at about 15.5% and blended it with what was brought in in the evening so it all averaged about 13-14% moisture,” adds Mr Stafford.

Winter wheat yields have edged higher in the latest AHDB Recommended List trials, with the latest six sites pushing the average yield up to 10.70t/ha compared with a five-year average of 10.61t/ha.

Feed wheat variety Graham is top yielder at 107%, with Belgrade second at 105%, while Reflection, Silverstone, Crispin, Evolution, Dickens and Santiago all yielded 103%.

Untreated fungicide yields from one site show how the new yellow race can impact on yields with Reflection down at 3.83t/ha and Graham 8.75t/ha.

On oilseed rape, four trials from Yorkshire to Aberdeenshire have been added to show a gross output value at 4.43t/ha, 0.84t/ha below the four year average of 5.27t/ha, with the low yields seen in the South being reflected further North.