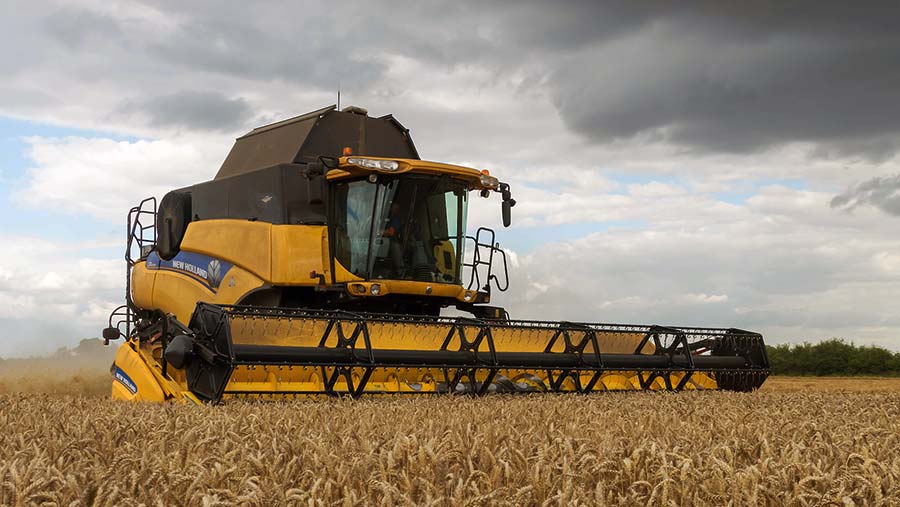 The Great British winter wheat harvest is now into its second half, thanks to a surge in progress despite another week of largely unsettled weather.

An estimated 25% of the total area of winter wheat in England, Scotland and Wales was harvested in the week to 22 August, as growers pressed on with harvesting at higher moistures to avoid added delays in what has already been a catchy harvest. This brings the total harvested so far to 65%.

Yields for the winter wheat crop in Great Britain are predicted to be a fraction above the five-year average of 7.9t/ha, with Adas forecasting an average between 8.0-8.2t/ha for harvest 2017.

Indications are that most milling wheat crops are meeting specification, while Group 3 and 4 wheats have suffered from wet weather delays and Hagbergs – a measure of gluten quality – are now falling.

Most remaining crops are now below specification (in the South West, South East and West Midlands) but protein contents and specific weights have largely met specification.

Almost all crops harvested in the last week have required drying, coming in at higher than ideal moisture contents.

About 40% of the spring barley grown in Great Britain has now been cut, according to Adas, with yields and quality looking good but not exceptional.

The spring barley average yield is forecast to be between 6-6.2t/ha – slightly higher than the five-year average of 5.6t/ha, although this prediction is mainly based on data from harvest in southern England so far.

Specific weights have been reasonable to date, averaging 64-65kg/hl.

The winter and spring oat harvest is progressing well and is a week ahead of normal, with about 60% of the total English, Scottish and Welsh crops combined.

The vast majority of winter oats is now cut, although progress in Wales is behind, and most regions are now cracking on with the spring oat harvest.

An estimated 14% of the oat area in Great Britain has been affected by lodging this harvest, with some large areas of lodging seen in the South East.