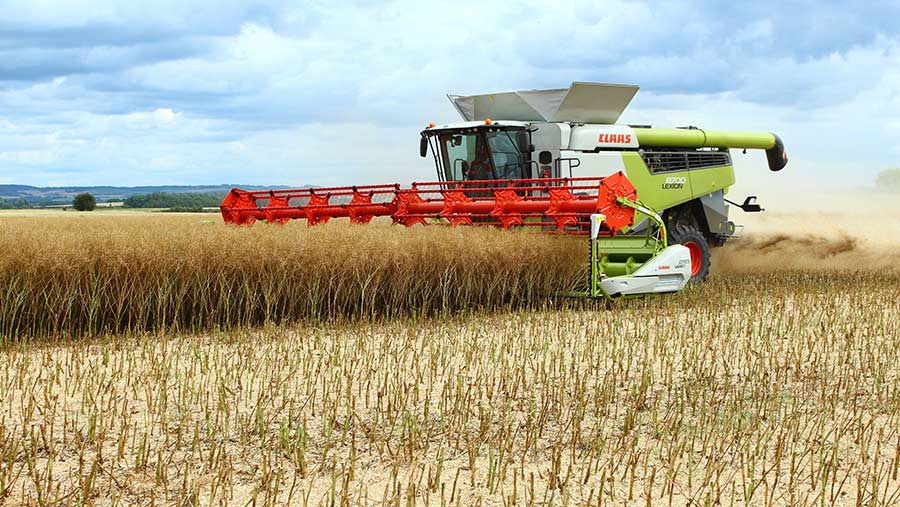 Oxfordshire grower George Farrant is pleased with his yield of 3.5t/ha from his oilseed rape harvest, and plans a bigger area next season after nearly abandoning the crop.

He cut 80ha earlier this week and hopes to complete all his 120ha by the end of the week, with grain coming in at 7-10% moisture and his oilseed rape coming to harvest before winter barley for the first time.

“We are very pleased with the yield as we were on the verge of giving up on oilseed rape altogether,” he told Farmers Weekly.

This season, Mr Farrant halved his area of the crop after suffering from low yields, due to damage from cabbage stem flea beetle, and also changed his growing strategy.

In summer 2019, he used a starter fertiliser at drilling time and also drilled the crop earlier in mid-August, rather than the end of the month, and then the crop gained from rain just at the “right time”.

The result was a yield varying from 2.9t/ha to 3.7t/ha all from the Clearfield variety Imperial, which can be grown using certain herbicides to control troublesome weeds, such as charlock.

The oilseed rape crop was cut by Mr Farrant using his new Claas Lexion 8700TT combine on its first full day of harvest earlier this week.

For the coming season, he is taking on more land and looking to increase the farm’s area of oilseed rape to 200ha.