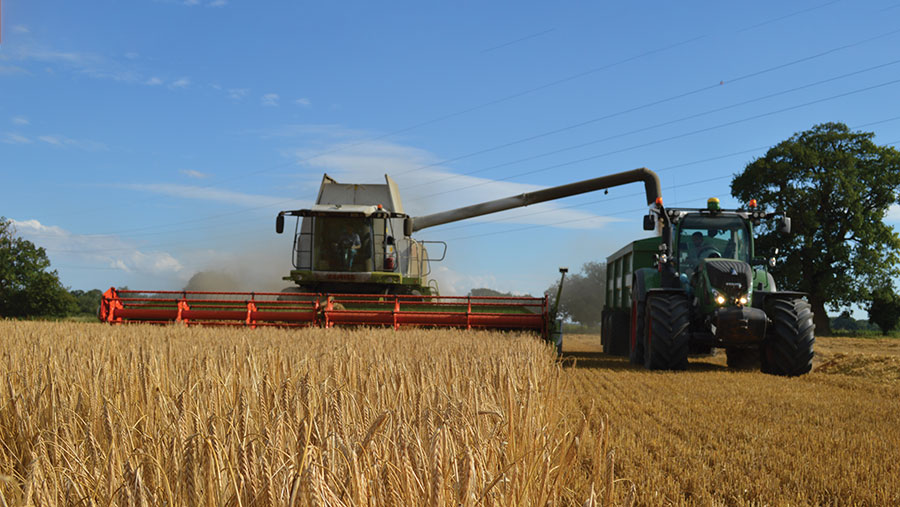 Scattered crops of malting varieties were being cut from East Anglia down into Dorset, while one Norfolk grower dipped into his oilseed rape ahead of winter barley.

After drying winds early this week, harvest started of the heritage variety Maris Otter, as well as more mainstream Craft amid uncertain demand for malting barley as the coronavirus lockdown is slowly eased.

Dorset farm manager Martin Ford started cutting 190ha of Maris Otter on Monday on light land in the south of the county and was very pleased with a yield of 6.5t/ha.

This season’s crop delivered a similar yield to last year and with a good grain sample, so Mr Ford was happy, especially after a tricky growing season with a very wet autumn and winter followed by a bone-dry spring.

“Otter is very reliable. It is early to harvest, so gives us a good early entry for oilseed rape and last year’s crop fetched £205/t,” he said.

Mr Ford hopes to finished cutting the Maris Otter by the weekend at Charborough Park, between Blandford Forum and Wareham.

The variety is an old favourite among the craft brewers and grain at below 1.65% nitrogen can fetch a £60/t plus premium over feed barley. The variety has been grown since the 1960s, while the newer Craft made it onto the AHDB Recommended List in 2016.

Peter Allen, who farms in Bedfordshire and Hertfordshire, finished combining 60ha of Craft early this week, with a pleasing yield of 7.5t/ha, given it was grown on medium to light land.

Harvest started nearly 10 days earlier than normal, and although the straw was just a little green in places, the grain was ready for combining, and was cut at 14.6% moisture showing a specific weight of 62-63kg/hl.

“The crop went in well, but suffered in a wet autumn and dry spring, so we are pleased with the yield,” he said.

He farms and contracts 1,200ha as P&D Allen Farms, based near Biggleswade, but the winter barley crop, grown for seed, was a little further south, near Letchworth.

“I think the winter barley harvest will surprise, with crops in the South and South West looking especially good,” he added.

The group trades with 400-plus growers stretching from Cornwall to north Norfolk and from Hampshire up to Yorkshire, and Mr Arnold is seeing good crops of Maris Otter and Craft across Hampshire, Dorset and Wiltshire.

He said one grower had just started cutting Maris Otter at a yield of 6.25t/ha, weighing heavy at a specific weight of 73kg/hl and giving a low 1.4% nitrogen content. Otter is still selling for a £60/t premium over feed and Craft £10-£15t/ha despite the dip in beer demand from the Covid-19 lockdown.

The maltsters use about 1.9m tonnes of barley each year, but only a relatively small amount of about 250,000t comes from the winter crop, with the majority from spring-sown crops

Meanwhile, Norfolk farm manager Andrew Hunt kicked off his harvest with oilseed rape ahead of winter barley after part of his rapeseed crop matured very quickly.

Hear varieties are used to make primarily industrial oils, and sells at a premium to conventional oilseed rape, with Mr Hunt expecting a price of £380-£400/t

“This is a better yield than expected, considering the year, and I am quite happy with it,” he said.

Mr Hunt is manager at the 1,300ha Great Melton Farms, just west of Norwich, on some very light, sandy loams, where he has grown 11t/ha-plus crops of winter rye.

Over on the feed barley side, farm manager Martin Button was cutting a seed crop of Hawking winter barley on the 1,600ha Bisterne Farms Estate in south-west Hampshire, on the edge of New Forest.

He has 40ha of Hawking and Orwell to cut, with the Hawking yielding 6.8t/ha at 14.2% moisture, which is a little disappointing, even for the estate’s light, sandy soils, some six miles from the coast at Christchurch, where the River Avon meets the sea.

“I would like to be above 7t/ha, but it reflects the season. I am disappointed, but not surprised,” he said.

Mr Button added that the crop established in wet ground in October, its roots stayed wet all winter and then the ground dried out dramatically in May. Hawking is the new highest-yielding two-row feed winter barley on the AHDB Recommended List.

Norfolk grower Mike Dennis has finished cutting all his 12ha of the conventional six-row winter barley variety Funky, with yields looking close to 6.25t/ha, and the last crop coming off this week at 16% moisture.

Combining started on the last day of June on his light land Breckland farm, just south-east of Swaffham, a few days earlier than normal.

“For this year, this is the kind of yield we would expect and we are quite happy with it,” he said, and added that the farm’s Skyscraper winter wheat and Scholar spring barley look good ahead of harvest.

Mr Dennis runs the 64ha Kings Row Farm in North Pickenham with his two sons, Colin and Christopher, as MP Dennis & Sons, and all the barley is fed to a 200-sow herd. 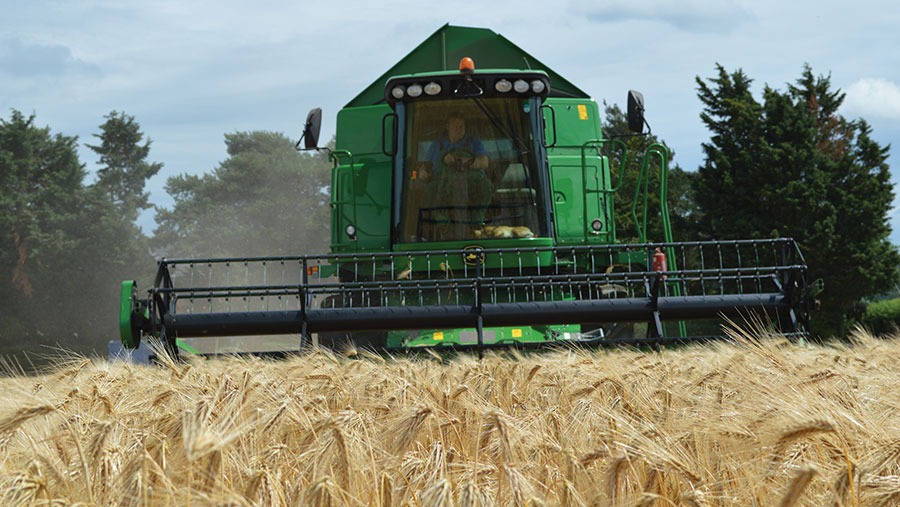 Euston Estate in the Suffolk Brecklands was starting to cut the two-row feed variety Tower at 14% moisture, dodging the showers, with a large block of the six-row hybrid Bazooka to come.

“The Tower is yielding just over 5t/ha, but we are hoping it will improve, with better crops ahead,” said farm manager Matthew Hawthorne.

The 4,400ha estate on some very light, blow-away sandy land is growing 80ha of Tower and 200ha of Bazooka.

With a sharp fall in the winter barley area and a steep rise in spring plantings due to the wet autumn, grain traders are predicting this year’s barley crop will have a similar yield to last year at 8m tonnes.

Yields are in line with the five-year average of 7.0-7.5t/ha, and specific weights at 62-63kg/hl are a little light, but in line with what would be expected from early-cut crops.

“Considering the year, very early results are a little bit better than expected, but any strong conclusion on the barley crop will only come from the much larger spring crop,” she added.