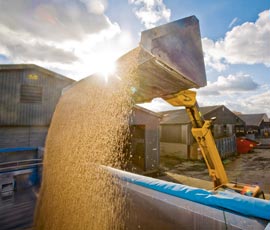 Farmers have made good progress with harvest over the past week, cutting 500,000ha and bringing the total completion rate to 25%.

Although that was half the average progress of 50% complete by the end of the third week in August, it reflected the slow maturation of crops rather than the weather impact on harvest, said the HGCA’s latest report.

“In the South, progress is about two to three weeks later than normal, although in Scotland and north England it is closer to average.”

Winter barley quality was also good, with specific weights averaging 66kg/hl, nitrogen 1.7% and screenings 1-4%. With 90% of the crop now cut, yields were better than average, at 6.4-6.8t/ha, it added.

Spring barley harvest was about 20% complete by Tuesday (20 August), with early yields slightly above average at 5.3-5.7t/ha.

About a fifth of the GB oat area had now been cut, and early yields were slightly better than average at 5.6-5.8t/ha, with specific weights at 49-57kg/hl, said the report.

But the poorest crop of the year to date remained winter oilseed rape, with below-average yields of 3.3-3.5t/ha.

With just half the crop cut, oil levels seemed satisfactory at 40-44%, but admixture was an issue, it added.

“Small weed seeds and volunteer cereals in harvested crops is a problem this year, with some of the most affected crops yet to be harvested.”