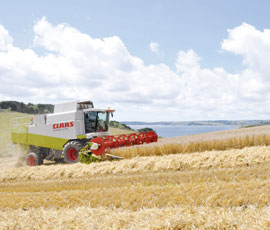 Harvest 2013 continues to yield some pleasant surprises, with rapid progress and better than expected yields in many areas.

In Yorkshire, Keith Snowball had made light work of harvest near Brandsby, with spring barley running far quicker than the wheat it replaced.

“We had a fair wedge of spring barley to cut, which is combining more easily than the same wedge of wheat would,” he said.

Harvest was now about two-thirds complete, but yields had been extremely variable.

Results had also been mixed at Pound Farm, Tuddenham, Norfolk, although Simon Dann was pleasantly surprised at the improvement from the spring.

“Considering how the crops looked several months ago, it’s amazing where some of it has have come from,” he said.

“We had a surprise meadow field of Relay that we couldn’t get to with fertiliser until the first week of May, which then reached 9t/ha.”

Across in Gloucestershire, harvest had exceeded Richard Daniels’ expectations at Broadfield Farms, Northleach.

“We’ve seen some very good yields,” he said. “Being organic we would naturally expect to be behind conventional farmers in the area, yet some of our yields have been almost as good.”

In Somerset, Chris Vowles had raced through harvest in just two weeks at Freemans Farm, Barrow Gurney, and was pleased with this year’s barley.

The 21ha of Propino and Quench spring barley yielded between 5.7t and 6.2t/ha. Although yields were not record breaking, the straw and bushel weight was very good, with quality much better than last year, he said.

But in Scotland, spring barley yields were very disappointing for Martin Bridges at Moray Estates, Elgin, Morayshire, with Concerto, Optic and Propino struggling to reach 4.9t/ha.

“Usually we’d expect 5.6t/ha, so it’s been quite disappointing,” he said. “It suffered heavily from sand storms after it was drilled and then it burnt in the fine weather.”

The winter wheat was much better, with the best of the crop yielding 8.6t/ha.

“We budget for 7.4t/ha so we’re fairly happy, although as an overall average we’ve probably hit our targets and that’s about it.”