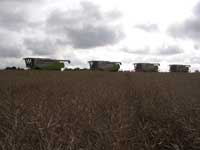 Harvest continues to be a localised affair, with some farmers getting ready to finish winter wheat, while others struggle in torrential conditions.

Agronomist John Snowball said two farmers would be finishing wheat in East Essex tomorrow (7 August), and in general yields and quality had been exceptional.

“Everybody is well pleased with their wheat – I haven’t spoken to a farmer who’s been disappointed yet.”

Further north, Carl Tuer had finished winter barley near Alnwick, Northumberland, leaving him without any crops ready to combine.

“We won’t be combining now for another 10 days – I have never known a time when we’ve been ahead of our Yorkshire and Nottinghamshire friends.”

Farmers had generally finished winter barley in the area, but had not made a start on rapeseed, making harvest about 20% complete, he said.

But in the middle and west of the country, incessant rain continued to keep combines at a standstill.

“We have had absolutely diabolical weather,” said Robert Tallis in Leicestershire. “The rain just seems to have settled over the middle of the country.”

One farmer near Ashby-de-la-Zouch said his harvest was twice as bad as last year’s, after receiving 174mm of rain in July and August so far, compared with 141mm in the whole of July and August last year.

Conditions were similarly soggy in Powys, Wales, although David Price had managed to get on with his winter barley today, combining at 18% moisture.

The crops still looked good, and there was plenty of time for the wheat and oats to ripen, he said.

Torrential rain in Wiltshire destroyed Martin Smart’s chances of combining near Trowbridge until the weekend.

“The forecast was fine – but it’s pouring. Some of the rape has been sprayed off for up to four weeks and things are starting to get desperate.”

Unfortunately, further rain was on the way, with the Met Office issuing a severe weather warning for today and tomorrow across central and Eastern England.