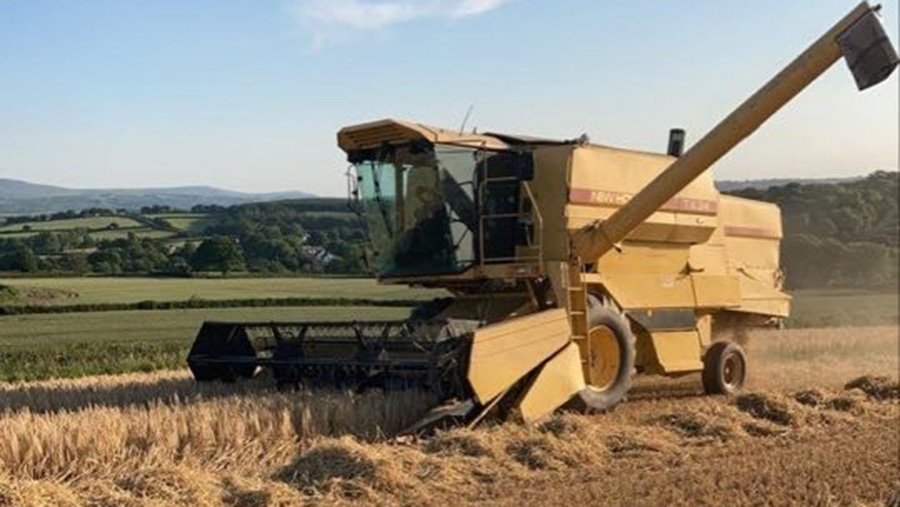 Harvest 2020 is now under way, with the first fields of winter barley having been cut on 23 June, at 13% moisture, on a beef, sheep and arable farm in Devon.

The Dennis family, who farm 280ha of arable cropping at Langmead Farm and Week Meadow Farm, near North Tawton, Okehampton, began their winter barley harvest two weeks earlier than usual, with 26ha out of 105ha cut so far.

“We have never started harvest this early before. We really were surprised that we did as usually we begin combining in the first week of July,” said farmer Daniel Dennis.

The crop was drilled early on 15 September, enabling it to get up and away quickly.

First to be harvested was Caribic barley, initially cutting at 17% moisture, which then dropped to 13%.

Mr Dennis highlighted that the spring drought had seriously knocked crops, causing particularly patchy areas in south-facing fields, with yields down by 25% in the hardest-hit fields, from their 8t/ha average.

“The dry spell did our crops no good. Ears were beginning to fall off in places so we knew that we had to get going with harvest,” he added.

The family grows continuous cereal crops, consisting of winter barley, winter wheat and spring barley, which is used as animal feed on the home farm, where they keep 280 cattle and 1,100 ewes.

Grain is also sold to local livestock feed manufacturer, Aylescott Feeds, and other local companies, while all straw is baled for use as bedding and feed on farm, with the remainder sold to other farmers.

Wet weather and forecasted showers is currently preventing further harvesting, but Mr Dennis highlights that the rest of the family’s winter barley is ready to be cut as soon as the weather improves.