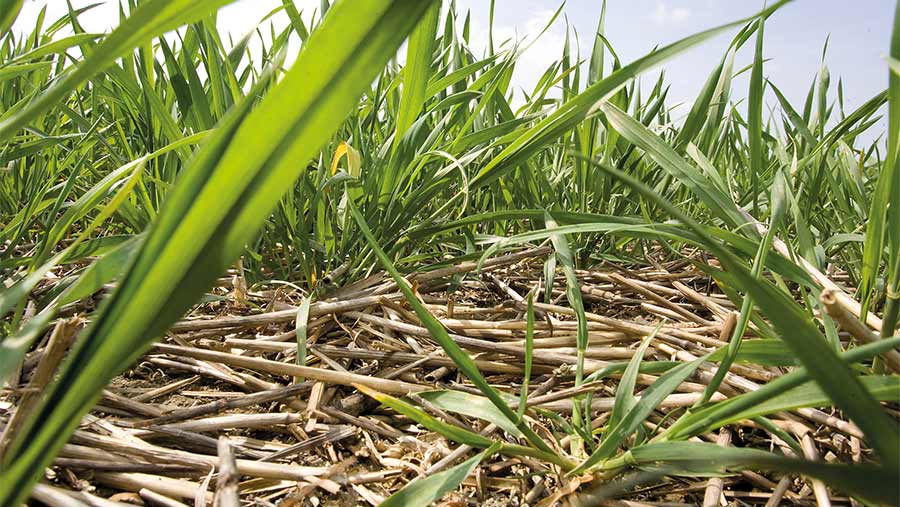 More scientific information on how different wheat varieties perform in no-till systems is needed, as growers are having to make selections based on limited data.

As the establishment method increases in popularity, growers are starting to find some varieties suit their system more than others, but scientific research is lagging behind.

See also: A guide to the top 6 yielding OSR varieties on the UK list

Research trials have been limited by the lack of small plot drills capable of establishing crops in a direct drill situation – although a small number are now being used by breeders and research institutes – as well as the expense of conducting enough comparative trials to draw clear conclusions.

Adrian Newton, a leader in integrated pest and disease management research at the James Hutton Institute in Scotland, is one of the few researchers to have carried out trials comparing different wheat varieties in no-till situations.

“We’ve trialled up to 30 varieties of winter wheat and winter barley for the past couple of years at our tillage platform at Balruddery Farm, and also on a farm in Fife,” he explains.

“The farm at Fife is a mature no-till or conservation tillage situation, where we’ve been allowed to plough up some of the farmer’s carefully nurtured soil to do a classical comparison trial of the two systems.”

Unlike in spring barley – where Prof Newton says there are clear-cut differences in varietal responses to non-inversion tillage compared with the results from the Recommended List trials – differences in winter wheat and barley variety performance are less extreme.

“We’re still in the process of analysing trends. While you do get some changes, I would hesitate to name any varieties until we see if there is consistency between the two sites and years.

“Especially, as what tends to happen is in higher stress years, you get a stronger response, whereas in better growing conditions, it’s closer to the Recommended List response.”

Intuitively faster-developing varieties seem like they would more suit a no-till situation, Prof Newton acknowledges, but says there is little hard evidence as yet.

“There are a number of characteristics that might help. We’re pretty sure some rooting characteristics will be important, but finding the exact traits and mechanisms is the next step in this work.”

Without lots of research and trials evidence to fall back on, there are perhaps two main options for growers:

For the latter, John Miles, product development manager for KWS, suggests using late-sown trials. “In no-till situations, there is the potential for adversity rather than the perfect seed-bed at the end of September, so perhaps the best guide to performance in that scenario are the late-sown pages of the Recommended List.

“Generally, those trials are drilled in December to late January, and what tends to do well are varieties with a decent speed of development, a high-tillering or retention ability, and aggressiveness that can compensate in some way,” he suggests.

His firm started to do its own no-till variety trials last year, finding growers prepared to have both establishment systems in the same field, he adds.

“This year, we have three such trials, but we’d like more next year. So far, the results haven’t suggested anything completely out of kilter.”

Essex grower Simon Cowell, whose soils haven’t had any cultivation for 15 years, has worked with KWS and Procam through his agronomist, Kevin Pearcy, to test varieties for both suitability in his system and differences in mycorrhizae colonisation of roots.

“The first couple of years work showed there were differences, with Silverstone in particular having higher colonisation,” says Mr Pearcy. “We’ve now taken four of the best varieties forward in trials to see whether that will allow us to manage them differently with reduced inputs.”

Three different input regimes plus an untreated control are being trialled both on Mr Cowell’s farm and a neighbour’s farm, which has a conventional tillage regime.

These are comparing a four-spray conventional fungicide programme, with a reduced input, low-cost, three-spray programme and a managed programme of spraying only when disease is present, as used typically by Mr Cowell.

The trial also includes Mr Cowell’s blend of four wheat varieties that have performed well in his system, which includes Conqueror as well as Silverstone. “It seems to be the taller varieties, like Conqueror, that like our system,” Mr Cowell says. 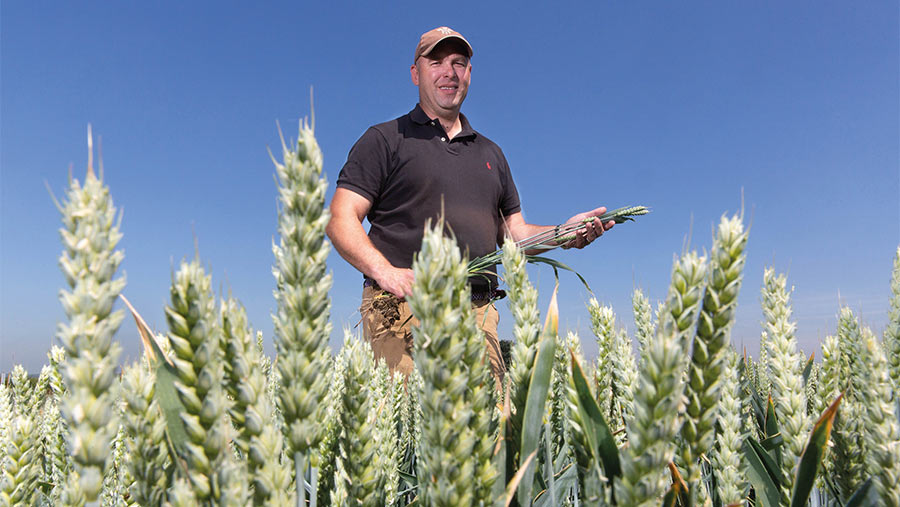 Excellent disease-resistance combined with good autumn vigour is top of Bedfordshire grower Russell McKenzie’s list of key attributes for wheat varieties on the farms he manages.

Now into his sixth year of no-till crops on parts of his 900ha (with other areas in year four of the transition), Mr McKenzie says the last thing you need is a slow-developing variety.

He has to drill in October because of blackgrass, rather than September, which is the ideal for non-till systems and would be his preference.

“In no-till situations, you don’t get that oxidation of nitrogen through cultivating. So those slower-developing varieties, although they usually catch up by the spring, can stay too open and let blackgrass through.

“And if you don’t have a particularly growy autumn, performance can lag behind all season and be up to 0.5t/ha down on yield, so the main thing I’m looking for is autumn vigour.

Having a bit of get up and go in the spring is also good, but the autumn vigour is more important.”

Finding which varieties perform is through his own trials, rather than the Recommended List, he says.

“We’ve hosted a number of variety trials for the past three or four years, which helps; and then for the past couple of years, we’ve had strip trials, which have been established with no-till.

“They’ve been really good to help pick out differences in autumn vigour and also ones that put out more leaves to cover the ground to help provide more competition against blackgrass.”

Extase, now into its third year on the farm, has been a standout performer for Mr McKenzie.

“It’s probably my number one because of its speed of development, and also provides that ground cover. Last year, we had it in a number of difficult situations, including our wettest, heaviest field and it established really well. It seems to be very hardy with what it will cope with.”

Other varieties that have coped well in Mr McKenzie’s system include RAGT’s Saki, the Limagrain’s Skyscraper and Spotlight, and KWS’s Firefly and Crispin.

“In wheat, we’ve seen only around 20% of the level of yellow rust in wheat compared with ploughing, and the same for powdery mildew in both wheat and winter barley.

“We think this is because in the no-tillage situation, you’re not smashing up the fungal networks – in particular the mycorrhizae – and also other microbial populations, so they colonise the wheat roots faster and help induce some resistance effects to diseases.”

That could mean growers have a more resilient system against those diseases, he suggests, giving more flexibility with fungicide timing and dose to help manage disease risk.

“Unfortunately, that’s not the case for trash-borne diseases, such as some spots and blotches like rhynchosporium. If anything, you get more rhyncho because of all the inoculum on the trash.”