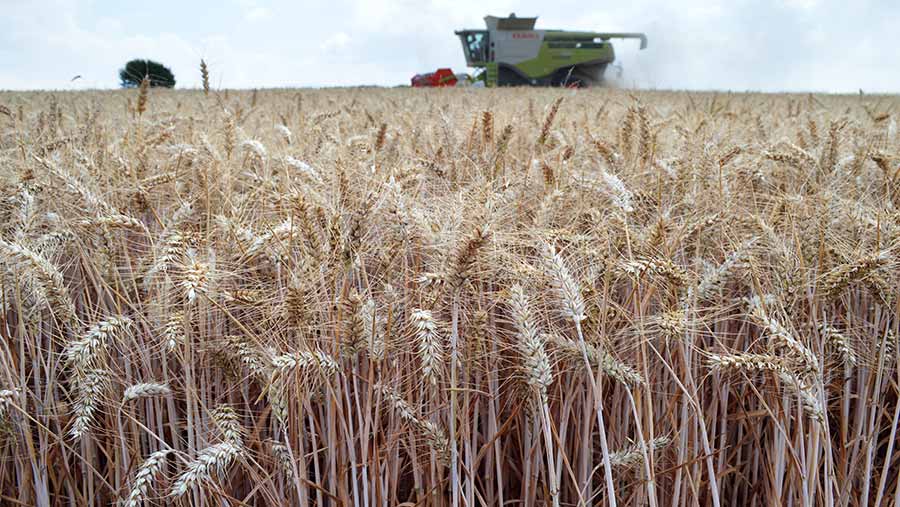 Early crops of winter wheat and spring malting barley are showing good yields, but growers are keeping a watchful eye on showers sweeping across the country which could hit grain quality.

Scattered crops of milling wheats harvested so far are showing good proteins, specific weights and hagbergs, while spring barleys have good quality although there are signs of grain skinning as a result of the June rain.

Wheat was being cut across the south and east of England this week after the interruption of last weekend’s rains, with yields generally ahead of last year’s drought-hit crops.

Yields and quality were looking good on the Isle of Sheppey in the Thames estuary, where farm manager Ryan McCormack has 500ha of milling wheat Crusoe, Zyatt and Montana to cut.

The first block of Crusoe was yielding 11.5t/ha at 15% protein, 284 hagberg and specific weight of 80-81kg/hl, with moisture falling to 14% as the farm team was cutting into the early morning to prevent grain quality falling. 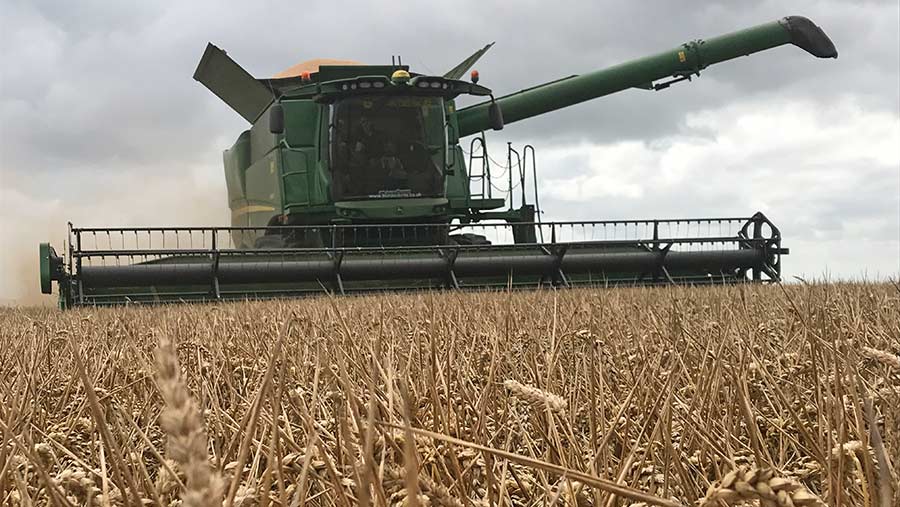 Ryan McCormack’s combine in the wheat

“We are very pleased with the yield and have been cutting until 2am as we are trying to catch the quality,” Mr McCormack told Farmers Weekly.

The farm team cut some of its high-protein German Montana milling wheat at 16.9% protein but it was not quite ready. He is looking for a yield of 9.5t/ha.

Also on the Isle of Sheppey is James Attwood with 1,000ha of milling varieties Skyfall and Crusoe to cut. Yields so far have been as high as 15t/ha with good proteins and specific weights.

“The harvest so far is looking good with wheat yields in the 12-15t/ha range, despite the weekend rain,” he said.

The farm, which trades as SW Attwood at New Hook Farm, is seeing good specific weight of 82-83kg/hl and high proteins of about 14%.

It has just completed the oilseed rape harvest on its rich silty soils, with 280ha averaging an impressive yield of 4.9t/ha.

Essex grower and NFU deputy president Guy Smith started cutting wheat in perfect conditions late last month, with yields above his 10-year average, but he is concerned about grain quality after the recent rain.

Mr Smith has 170ha of the milling variety Crusoe to cut and this was yielding above his 10-year-average of 8t/ha and quality was good with the grain weighing “like lead”. 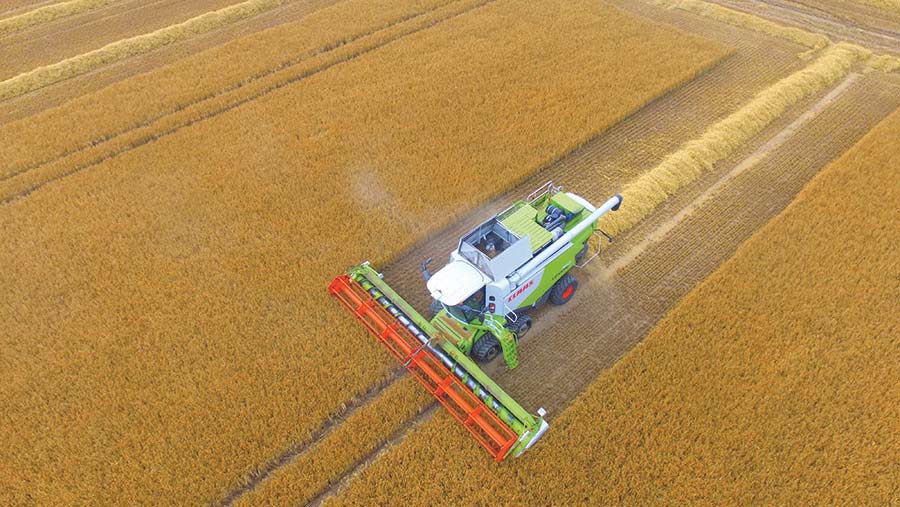 “After a very good start to harvest, I am concerned the grain could deteriorate as the wheat is looking a bit grey and washed out,” he said after combining until 4am.

Mr Smith says yields are still excellent on some of his heavier soils at his Wigboro Wick Farm, St Osyth, near Clacton-on-Sea, in one of the driest areas of England.

David White in Cambridgeshire has cut 20ha of the milling variety Zyatt with yields of 8t/ha on some of his lighter land, and giving a sample which meets milling specifications and better than last year’s drought-hit, pinched grain.

“For winter wheat on light land this is reasonably respectable,” he said. “It’s early days yet, but it’s a better start to harvest than last year.”

Mr White said the combine yield meter ranged from 7.75t/ha to 8.2t/ha through the crop across the 20ha block, and the rest of his milling wheats, including Skyfall and Solstice, still had a bit of sap in the straw and would be harvested this weekend. 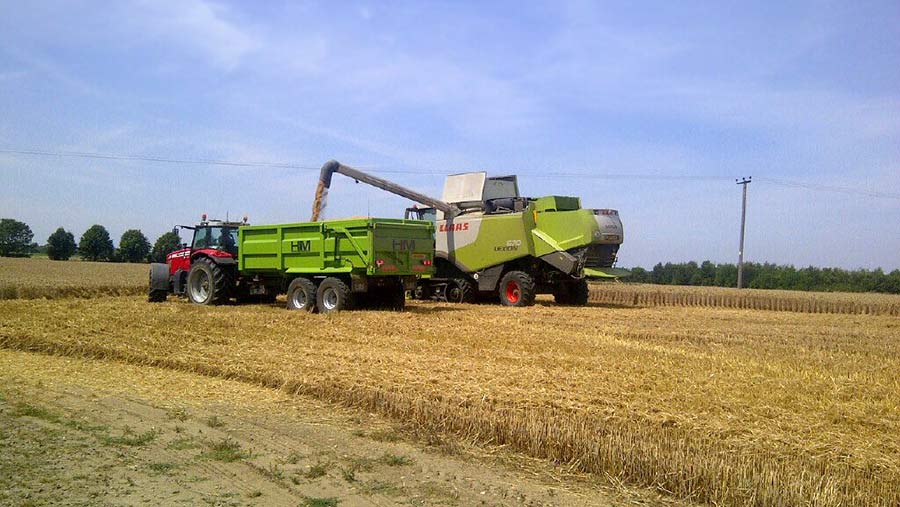 Philip Darke, operations director at Camgrain, said what little wheat the group had seen was at an average specific weight of 81kg/hl, hagberg over 250 and good proteins, but there was obviously concern about the rain this week.

“Growers may have to use their grain driers more than they did last year,” he said.

Some wheat growers have switched to spring barley as it dries out quicker than wheat, and barley crops were being cut from Dorset to Essex and up into East Anglia.

He has 180ha of Propino, Planet and Laureate to cut on the Velcourt-managed farm on some light land, which he is cutting ahead of his feed winter wheats.

“We have some early-January drilled Propino yielding well at about 7t/ha which was a reasonably low input crop and is producing a reasonably bold sample,” he said.

Jonathan Arnold at specialist malting barley merchant Robin Appel is seeing good crops across the south of England with all the main malting varieties such as Propino, Planet, Laureate and Diablo being cut.

“The harvest is generally going well with yields good and no high grain nitrogens although we are seeing skinned grains due to the June rain and green grain from some secondary tillering,” said Mr Arnold, the group’s trading director.

He is seeing yields of 7-7.5t/ha and grain nitrogens of 1.45-1.65%, with many crops across southern England missing out on the heavy rain seen further east and north. Many spring malting barley crops are not quite ready for harvest so it is hoped they will not be too damaged by the weather.

Meanwhile, one West Midlands grower hit the highest yield of any winter cereal he has seen on his farm – a winter barley yield of nearly 14t/ha after favourable weather and a previous crop of soya.

Edward Kendall says the yield from a 6ha field of the hybrid six-row variety Belfry touched 13.93t/ha and the combine yield metre did not drop below 13t/ha across the whole field.

The family farm is cutting 104ha of winter barley with average yields so far of almost 12.5t/ha when long-term average yields on the farm are about 7.5t/ha.

“This was an exceptional harvest and it was the best yielding field of barley or wheat we have on the farm,” he said.

The high yield was put down to favourable weather and a previous crop of soya which helped the soil structure and added to the fertility of the variable soil type in the field.

The soya crop was harvested in 2017, followed by a very good crop of winter wheat and then the winter barley this harvest. After two years of assessing the benefit of the 2017 soya crop, the farm will definitely be growing it again in 2020.

The crop was cut at 13% moisture and gave a good clean and bold grain sample on the family farm, which trades as G&B Kendall & Son at Hay Head Farm, Longwood Lane, just east of Walsall.