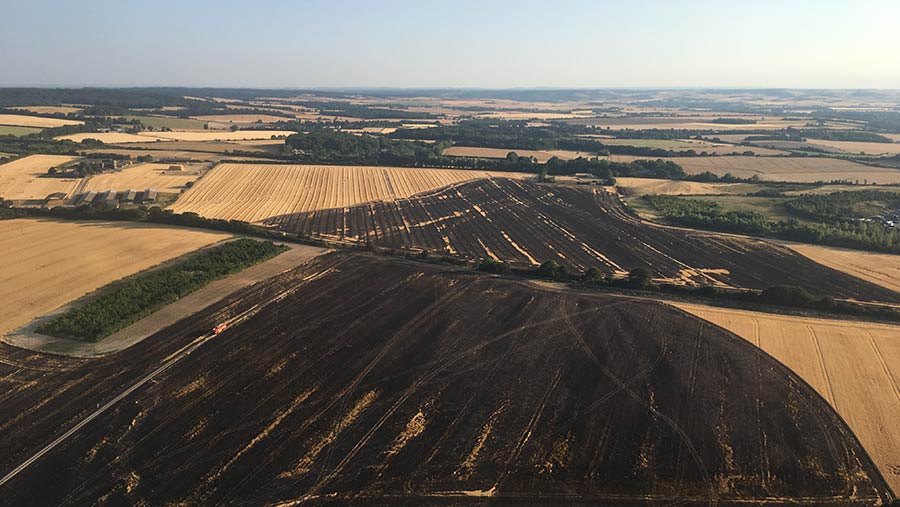 A farmer has thanked neighbours and firefighters for helping to contain a field fire that destroyed 47ha (116 acres) of winter barley but saved 8,000 pigs from being burned alive.

The blaze, at Ewelme Down Farm, in Ewelme, near Wallingford in Oxfordshire, started at 5.27pm on Saturday (14 July).

Farmers broke off from harvesting to dig fire breaks and help 50 firefighters stop the flames from spreading to adjacent fields. No one was injured.

Bernard Wallis, the farm owner of Ewelme Down Farm, told Farmers Weekly: “It was extraordinary the effort my farming neighbours put in. It’s amazing to think they stopped their own harvest to look after one of their own in a time of need. 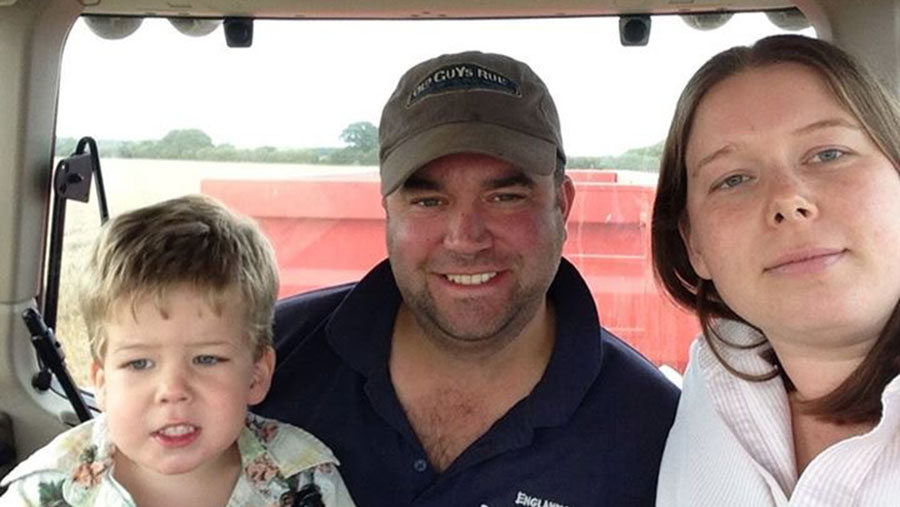 Farmer Bernard Wallis with his wife Selina and son Robert

“Without their help, 8,000 pigs in neighbouring fields would have been burned alive. Thanks to my friends, only 116 acres of barley was lost. But the consequences could have been much, much worse.”

The drama started around teatime on Saturday when Mr Wallis was harvesting a field of Surge winter barley, which was harvesting 9.5t/ha. His combine driver, Steve Lansley, first spotted flames.

“We tried to put the fire out, but had no luck. We got the combine and all the machinery off the field and called 999,” said Mr Wallis.

“Oxfordshire Fire and Rescue Service sent 10 fire engines here in minutes. The firefighters used water cannons to put out the flames. I called my neighbours and they came to my aid.

“They all came with their tractors, ploughs, cultivators and discs and created fire breaks.”

There were 2,000 pigs in a field on one side of the fire and 6,000 on the other side. All are owned by the Stockings family, who run Potters Farm.

Field fire on road outside Ewelme. Farmer trying to make a fire break between fields. Seems to have been brought under control. pic.twitter.com/CvIBMmo0KG

In total, 26ha of standing barley and 20ha of straw in the swath was destroyed. But Mr Wallis, who farms 809ha in total, is insured for the loss.

“I would like to thank the efforts of the fire crews and my neighbours. Without them, there could have been significantly more damage,” he said. “The Stockings family were all there helping with their water bowsers too.”

The fire is understood to have started accidentally. A flint spark underneath the combine is suspected.

Mr Wallis said the fire happened in the same field where he was almost electrocuted 20 years ago when his combine touched an overhead power line. He urged all farmers and landowners to have a plan to ensure that farmworkers know what to do in the event of a fire. 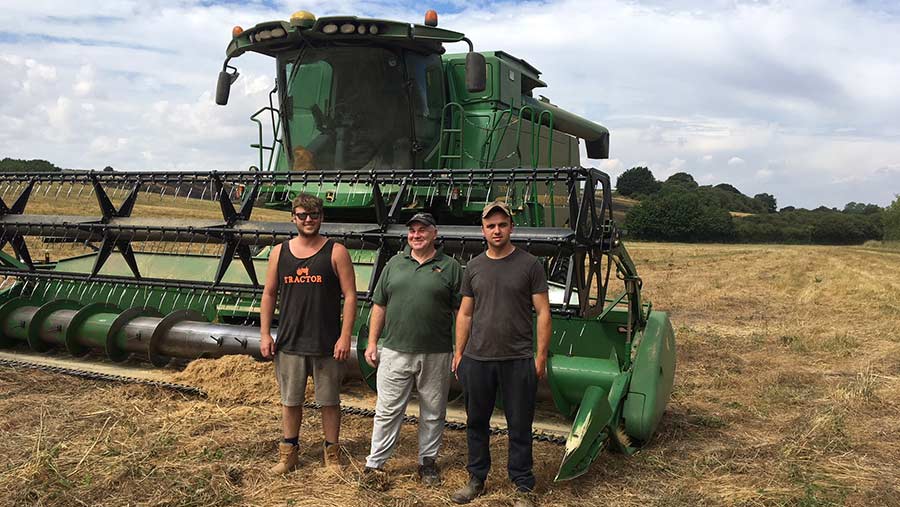 “They ought to think about fire breaks for protecting livestock. If you have got the time after combining, plough in a fire break. We all know harvest is a busy time, but what happened to me should serve as notice to others about what can happen.”

Mr Wallis’s sister, Rachel Wallis, who runs The Chilterns View, a high-end glamping company on the Ewelme Down Farm estate, said: “It’s just amazing to think that farmers stopped their own harvest to help one of their own.

“Their efforts didn’t just save the farm, they saved my business too. The fire service were also fantastic.”

Oxfordshire Fire and Rescue Service said crews from Didcot, Wallingford and Wantage were deployed. Ten fire engines and additional support vehicles sent to the scene to bring the fire under control. 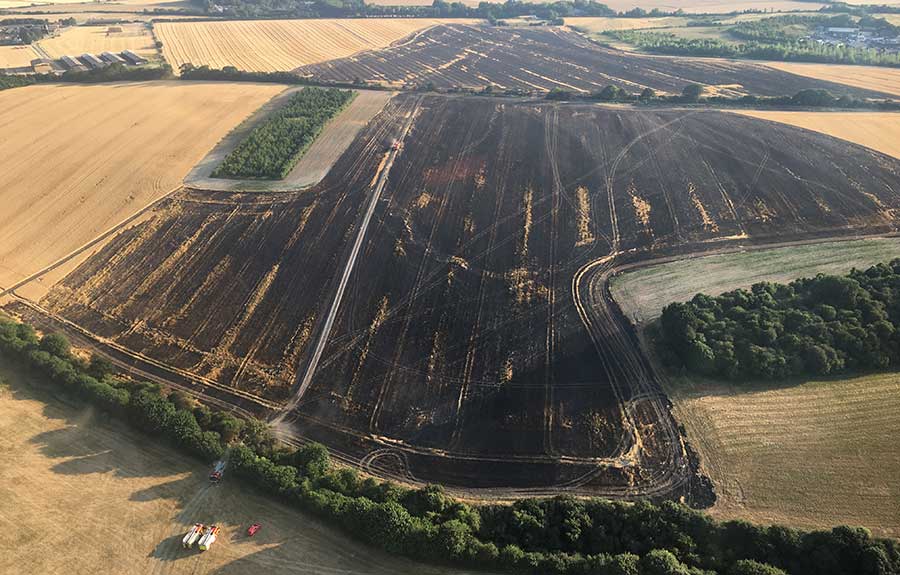 An aerial view after the fire was extinguished. Note the fire engines at bottom left © Oxfordshire Fire and Rescue Service

Group manager Dave Bray, who attended the fire, said: “This was a very challenging incident for all of the fire crews as they had to work in very hot ambient temperatures.

“Once again it demonstrates just how well the fire and rescue services located across the Thames Valley are able to work together.

“We were also aided greatly by the local farmers, who upon identifying the presence of fire immediately commenced creating fire breaks around the outside of the fields by ploughing through the crop.

“Fortunately this helped us in preventing the fire spreading to a nearby pig farm, as well as other buildings.”

Fire crews from Buckinghamshire and Berkshire were also sent to the scene to help. Thames Valley Police dealt with road closures and the National Police Air Service provided helicopter support.