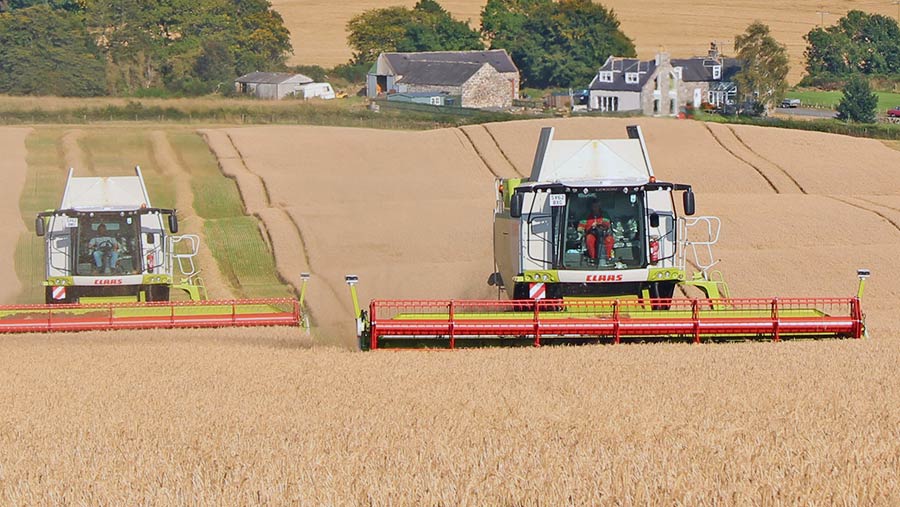 Cereal growers in northern England and Scotland are becoming frustrated that wet weather is preventing the final push to complete harvest this season.

In Yorkshire, harvest was proving to be quite frustrating for Guy Shelby at Benningholme Grange near Beverley. He still has linseed and spring beans to combine but is waiting for better weather.

“The weather has been a complete pain. It is just stop-start and an absolute nightmare. It has not been a bad harvest in terms of yield but we started combining at the end of July and only finished cereals on Wednesday (6 September),” explained Mr Shelby.

Overall, first and second wheats averaged 10t/ha, and his milling variety Skyfall wheat made milling quality while he was expecting his spring barley to make malting specification.

Even though half of his spring barley had gone flat, it achieved a yield of 8.15t/ha, with a specific weight of 66-67kg/hl.

In Northumberland, harvest has gone well for Carl Tuer at Rock Farms, Alnwick.

“I haven’t normally done wheat by the end of the first week in September, but I finished at the beginning of the week. Only twice in 15 years have I completed before 9 September,” he said.

Mr Tuer’s second wheats were the poorest for several years, with the variety Leeds achieving 8.15-9.38t/ha. His first wheat Grafton averaged 10.87t/ha, and he expected his Scout and Silverstone to have gone better.

In Perthshire, Adrian Ivory was 80% of the way though harvest at Strathisla Farms, Meigle, with the remaining 20% ready to cut.

“It has been a very stop-start affair and has not been easy. A lot of the barley has brackled but yields have been good,” he said.

“The Zulu wheat was the best performer, with a dried weight of 9.15t/ha and a specific weight of 76-77kg/hl. The weather is just unpredictable at the moment and everything is ready to go. There is also a huge amount of straw lying around,” he said.

“We cut the winter barley at the end of July which yielded 8.2t/ha, while the oilseed rape averaged 4.4t/ha. The Laureate spring barley had one bad field but averaged 6.2t/ha and was all of reasonable quality for malting,” he said.

Mr Cargill’s wheat averaged 9.9t/ha and the oats have yielded 6.8t/ha so far – although moisture levels were over 20%. He was hoping to get his crop of daffodils planted and to start lifting potatoes next week, but the weather was not forecast to give him a window.

Held up in Northern Ireland

In Northern Ireland, Graham Furey has been unable to cut anything at Castleview, Killyleagh, County Down, for a week. His spring barley has mostly yielded 6.2t/ha with some at 7.4t/ha.

“We have had a very poor three to four weeks, causing a lot of problems for everybody. The main thing left to cut is spring barley with only about 20% done in the area,” he said.

Mr Furey had a small amount of winter wheat to finish off, with moistures high and quality not great, while yields ranged from 8.6t/ha to 9.9t/ha.

“There has been sprouting in the wheat and spring barley is now on the ground – so there will definitely be losses of 10-20%,” he added.