Wet weather is prolonging this year’s harvest across Scotland, northern England and especially Northern Ireland, which is seeing one of the worst harvests on record.

Northern Ireland has born the brunt of poor, wet weather in recent days and this is taking its toll on harvest progress as well as crop yields.

At Carse Hall, Ballykelly, Londonderry, Robert Craig’s winter barley yielded 25% less than expected, with Cassia and Glacier averaging 8.6t/ha. He has 28ha of spring barley ready to cut, but it’s too wet to get on. 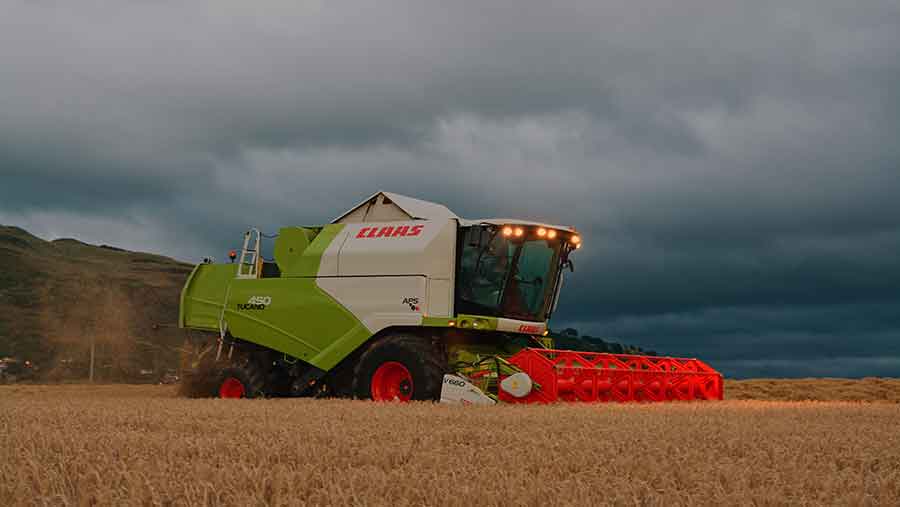 “This is typical across the North West; the Irish Farmers Association is offering free transport of combines from the South to the North to help finish harvest,” says Mr Craig.

His neighbouring farms have wheat yields that are 20% down on last year and fields of oats lying flat and having to be ploughed in.

“We had 18mm of rain last weekend (10/11 September) and my drying costs are already over double last year’s.”

In southern Ireland, Irish Farmers Association National Grain Committee chairman Liam Dunne says harvest has now turned into a salvage operation for many growers with later sown and later maturing crops, particularly on the heavier soils in peripheral areas due to heavy and incessant rain.

In some regions, 25%-30% remains in the field. The West, North West and the northern part of the country have been worst hit, he says.

He had less success with his oilseed rape, which suffered from club root and pod shedding caused by strong winds. The worst affected fields yielded 2.5t/ha, whereas his best fields reached 4.5t/ha.

Of the 200ha of spring barley, Concerto came off at 6.2t/ha with Chronicle slightly higher at 6.7t/ha. At 7.4t/ha Warrior yielded best but quality proved disappointing with 20% skinning.

The winter wheat is well under way at Lour Farms, with Beluga, Istabraq and Zulu all in the barn.

“Zulu has really impressed me, it was drilled later and in poor conditions and it was no worse on yield or quality,” says Mr Cummings. It is averaging 9.8t/ha with Revelation still to cut.

“The Revelation looks seven days away; I won’t be looking to grow much more of it.”

South of the river, Craig Peddie has completed a successful cereal harvest at Cornceres Farm, Anstruther, Fife, with a promising crop of beans left to cut. “The beans are looking good, I’m hoping they’ll come off at over 5t/ha,” he says.

Mr Peddie grew Meridian and Bazooka winter barley, which averaged 8.9t/ha – slightly down on last year. His Catriona spring barley came off at 6t/ha, with 1.8% nitrogen, 18% moisture and screenings of under 6%.

“Our winter wheat did very well, we were really impressed with the Leeds,” says Mr Peddie. Along with Viscount it averaged 11t/ha.

But strong winds battered his oilseed rape, which had already suffered from slug damage – lowering the yield to 3t/ha. “In future I think we’ll be dropping oilseed rape, it’s becoming too difficult and expensive to grow.”

“The oilseed rape has been really disappointing but we’ve had a good crop of slugs,” he says. His crop of high oleic, low linolenic acid (HOLL) and Incentive averaged 3.4t/ha.

“The HOLL was especially disappointing; it looked good but the yield was awful whereas the Incentive outperformed it but looked scruffy,” he says.

Winter barley yielded 7.7t/ha. “It was better than we had expected but the yield needs to be higher for it to be profitable.”

Mr Sanderson also grew winter wheat, which is still in the dryer. “The Skyfall has been particularly pleasing, and the Reflection was also very good, whereas the Revelation was late and the straw was very green so it wasn’t very good to combine.”

On the other side of the country Stephen Sant has finished his harvest at Model Farm, Staffordshire. “It wasn’t anything exciting, we were too spoilt last year.”

His Extrovert oilseed rape averaged 3.5t/ha, with Glacier winter barley at 6t/ha. His final crop of Grafton and Diego wheat averaged 8t/ha with a specific weight of 74kg/hl.