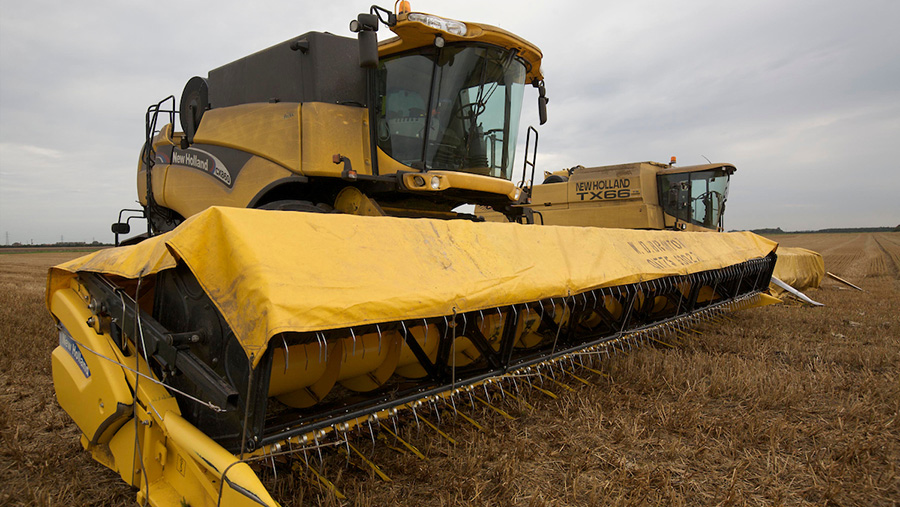 This week’s rain has halted harvest across the UK leaving many crops still standing throughout the North and in Scotland.

In the Scottish borders, Stuart Fuller-Shapcott described his harvest as: “Stop-start, stop-start”.

Despite this he has managed to cut his oilseed rape and winter barley with just winter and spring oats still in the ground.

“We were lucky; our crops have been ready when the weather’s been right,” he says. His feed barley yielded 8.9t/ha and his oilseed rape came in at 3.7t/ha.

South of the border in England, Keith Snowball is having a hit and miss harvest at High Farm near York. He is disappointed with his oilseed rape yield of 3.5t/ha, more than 1t/ha down on last year.

“The free-draining soils did the best with the heavier soils providing the disappointing yields,” he says.

His best results came from Mascani winter oats with an average yield of 7.5t/ha.

“The oats somehow seem to have enjoyed the weather.”

His wheat was variable with Crusoe yielding 7.5t/ha, outperforming a very disappointing crop of Skyfall at 6.8t/ha.

“Spring crops this year make you wonder why you ever bothered growing winter crops.”

In Worcestershire, the wet spell has delayed oilseed rape drilling for Ian Sparey at Tryfan Barn, Clifton on Teme.

Less than ideal establishment last season was partly to blame for disappointing yields this summer.

“We had to rush the establishment and with June being wet the pods never filled,” he explains.

The crop provided him with a disappointing 2.5t/ha.

Despite this, Mr Sparey had a pleasing cereal harvest.

“The weather’s been with us, everything has been coming off dry and it’s been a fairly straightforward year,” he says.

His JB Diego winter wheat came in at 8t/ha and his Propino spring barley at 7t/ha, both providing nice clean samples.

Mr Sparey is heading into his spring bean crop with a little less optimism, having suffered from the downpours in June.

The crops were astoundingly clean, spotless between the tramlines and the earlier application evened up the maturity of the whole plot Martin Smart, farm manager, Ashton Farms

Mr Smart explains: “It’s been common this year for the poorer looking crops to give better results than the best-looking ones; the early drilled Extrovert didn’t do as well as the later drilled, although it looked better.”

He  was surprised by the difference applying Toprex (difenoconazole + paclobutrazol) fungicide earlier to the crop made.

“The crops were astoundingly clean, spotless between the tramlines and the earlier application evened up the maturity of the whole plot,” he says.

His Crusoe wheat was variable, ranging from 4.8t/ha to 11t/ha depending on the soil type.

But he could not have been more impressed with his Skyfall which thrived on light, stony ground.

“It was absolutely awesome, easy to combine; clean; and the protein and yields were higher than the Crusoe,” he says.