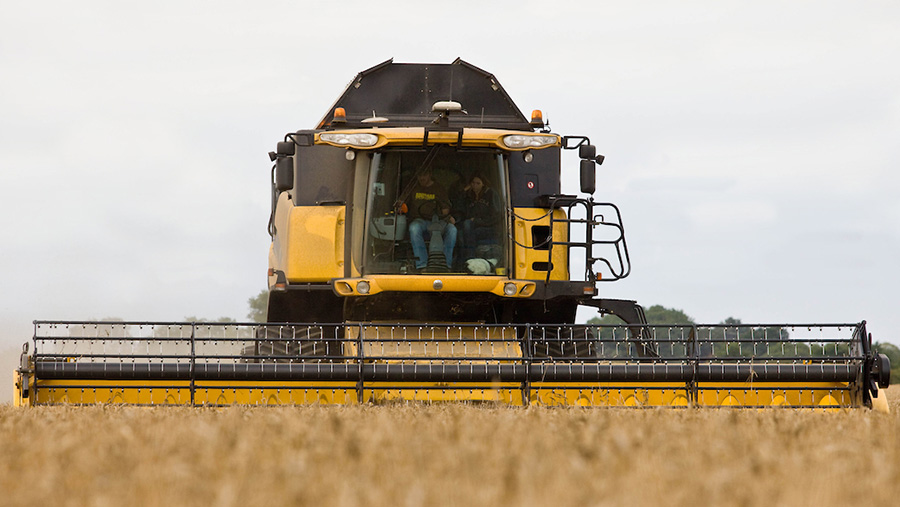 The milling wheat harvest is coming to a finish in the south of the country with mainly feed varieties left standing – although further north there is plenty to do in unsettled weather.

In Kent, Andrew Cragg is busy with his feed wheat at Brooker Farm, Romney Marsh, having already finished bringing in his peas.

For him, the milling wheat variety Skyfall failed to match last year’s success, but it still produced a good yield of 10t/ha and a specific weight of 75kg/hl.

The poor weather in the autumn was fairly disastrous, causing the failure of Mr Cragg’s oilseed rape crop and difficulties preparing the ground for peas.

The early sown peas performed best with an overall yield average of 4t/ha.

With a third of his feed wheat still standing, he is optimistic for good yields.

In Somerset, harvest is looking up for James Francis at Manor Farm,  Radstock, as with the barley and rapeseed harvest under his belt he is now making his way through a crop of Crusoe milling wheat.

With an average yield of 10t/ha, a specific weight of 77kg/hl and a protein level of 12.9%, his crop has met its milling specification, a pleasing result for Mr Francis.

However, this season’s poor weather has caused his oilseed rape yields to vary from 3.7t/ha in his drier fields to 2.7t/ha in wetter lying fields.

Mr Francis has a positive outlook going forward to start on his feed wheat crop of the variety Diego.

“I think it’ll be alright, it’s looking as good as the Crusoe and it’s ready to cut,” he says.

For Suffolk grower Kevin Hayhoe, oilseed rape has proven a bitter disappointment with mid-July’s hail storms wiping out over half his crop, reducing his expected yield of 4.5t/ha to an average of 1.9t/ha.

His second farm near Norwich delivered better results with an average wheat yield of 8.9t/ha, much closer to his target.

Specific weights varied from 71 to 78kg/hl, with the later drilled crops producing the higher figures, providing an average of 74.5 kg/hl.

Plenty to cut in the North

Where the Pearl was expected to attain 8t/ha, it yielded just 7.2t/ha and the Tower has delivered 8t/ha against an expected 9t/ha. In addition, the Pearl failed to meet malting specification.

Despite poor weather throughout the season, Mr Tuer is experiencing his driest harvest to date.

“I live in a beautiful part of the country but the weather is rubbish.

“This year we’ve had a brilliant run weather wise, I’m really impressed with how quickly the ground has dried,” he says.

In Scotland, the weather has been less favourable.

The harvest in Morayshire is two weeks behind for Hamish Forbes at Lockdhu Farm, Nairn, due to poor weather throughout the growing season.

The past two weeks have seen the surrounding area struck by strong winds which have flattened thick, green barley crops and drastically reducing oilseed rape yields.

“The past three days have been brilliant. But they’ve been the only three days of summer we’ve had,” he says.

Mr Forbes has just finished his winter barley harvest, being one of the only growers still growing the crop in the area.

His yields were poorer than expected at 7.4t/ha with an average specific weight of 60kg/hl.

However, with his spring barley and winter wheat still to cut Mr Forbes’ harvest summary may be set to improve.