More than one-third of the UK’s winter barley and 15% of the oilseed rape area has been harvested, with both yields and quality continuing to disappoint most farmers.

By 26 July, 35% of the winter barley harvest was complete, with yields averaging 6-6.6t/ha and ranging from 5t/ha to 8t/ha, according to the Adas/AHDB crop report. Specific weights were low at 57kg/hl.

In Norfolk, Paul Hartley had almost completed his oilseed rape at Poplar Farm, Downham Market, with 180ha averaging 5-5.5t/ha. He still had 50ha to cut when the rain set in on Friday (29 July).

Harvest started when temperatures were at 35C, and moisture in the rapeseed was 8.5%, but it then fell to 7%, which was really too dry, he said.

Oil contents in Compass and Incentive were coming in at 44.5%, and Mr Hartley hoped to finish combining oilseed rape over the weekend before moving on to wheat next week. 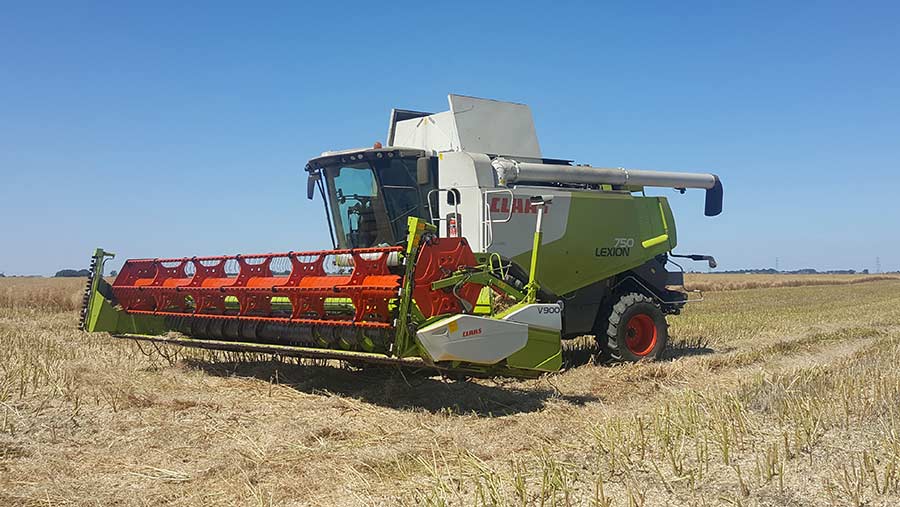 In Cambridgeshire, Anthony Carr had started combining his winter barley, but was not pleased with the results.

Of the three varieties Mr Carr grew, Carat performed best in terms of yield and specific weight – at 5.6t/ha and 63-64kg/hl.

Mr Carr was not holding out much hope for his wheat, winter beans and spring barley crops either.

“Wheat is a fortnight off harvest and already some of the ears are nearly totally blind,” he said. “But some looks good; it depends on the variety.”

Martin Boulden had finished harvesting all of his winter barley and oilseed rape near Aldington in Kent.

The 40ha of Tower winter barley was taken off in the third week of July at 13.1% moisture but had a disappointing yield at 4.9t/ha and a specific weight of 58kg/hl.

Mr Boulden combined 57ha of hybrid oilseed rape in the same week at 7-9% moisture, which yielded about 3t/ha.

“It has not done badly, considering it was drilled mid-September in awful conditions and had a difficult winter, spring and summer to contend with,” he said.

In Wiltshire the winter barley harvest was all wrapped up for David Butler at East Wick Farm, Wootton Rivers, Marlborough. He grew 202ha of barley – some of which was Cassata malting barley, which he had decided to use for feed.

Mr Butler also grew some Cassia and Volume. The Volume had bushel weights of 60-61kg/hl, but the Cassata and Cassia achieved between 66kg/hl and 68kg/hl. “I am thrilled that bushels have been no trouble,” he said.

Most of the barley came off at 15% moisture but the last block was 18% and required drying. Mr Butler estimated that yields were about 6.9t/ha, which was disappointing.

Mr Butler had just started combining oilseed rape, with indications that yields were down. “I have done only 5-10% of the rapeseed, but I think yields will be disappointing, at about 2.8t/ha,” he said. “I had some at nearly 4t/ha last year.”

Winter barley harvest was also finished for Nick Harding at Preston Farm, Blandford, Dorset, with 40ha of Volume cut at 12.5% moisture. It yielded 9t/ha and had specific weights of 62-66kg/hl.

Mr Harding had 40ha of Nikita oilseed rape that he hoped to get into early next week, but said it could be a disappointing year for rapeseed.

He also had Aspen spring oats, which looked fit, and winter wheat, which had suffered from some ear disease. “I am hoping that the later crops of spring barley and spring wheat will benefit from the July sunshine.”