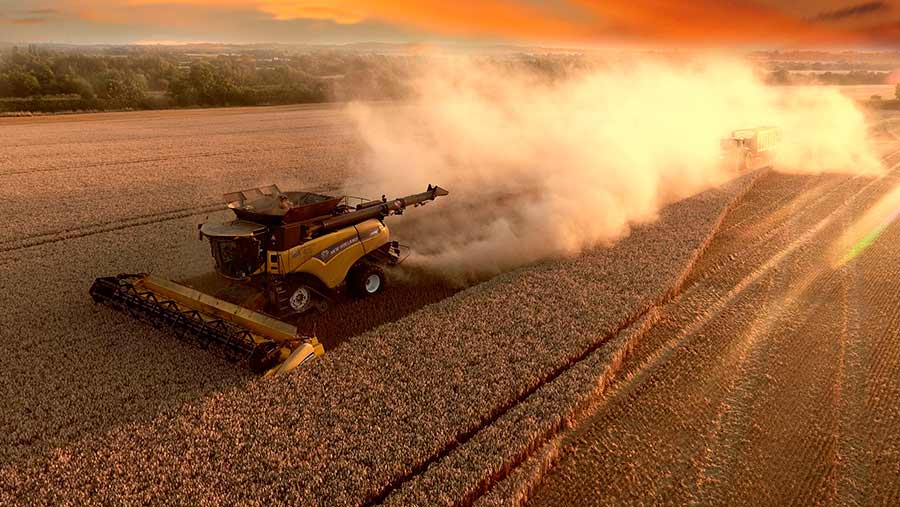 Milling wheats and malting barleys are being downgraded to feed quality across southern England as crops have suffered from a deluge of rain showers during harvest.

Areas worst hit are below the M4, and include Wiltshire and Hampshire, which are seeing little quality grain being harvested as crops have often sprouted in the field and lodged because of the wet August.

Many winter wheat crops have shown good yields of over 10t/ha, but gluten quality in terms of Hagberg levels has fallen with the lack of sun and barleys have sunk below malting quality.

Better grain quality further east is likely to ensure adequate supplies for millers and maltsters, but some growers describe harvest across the Wiltshire and Hampshire downs as a “salvage” operation.

One Wiltshire grower says the August weather has killed his grain quality with all his wheat and barley downgraded to feed as Hagberg levels plummeted and barley crops lost heads.

“Wheat yields have been good, averaging 10.5t/ha, but the August weather has killed any premium,” he tells Farmers Weekly.

His milling wheat variety Crusoe has been sacrificed as feed, and malting spring barleys have sprouted in the ear making them unusable for maltsters.

Todd Jex, agronomist with advisory group Agrii, says little quality grain has been harvested across parts of Wiltshire since the area was hit by summer storms.

“Generally, wheats are showing very good yields, but there is very little quality and so very little milling-quality wheat,” he says.

Wheat yields have been seen as high as 13t/ha, and with slim milling premiums and plenty of animal feed mills in the area, selling feed wheat is not disastrous, but the spring malting barley situation is more serious.

Storm damage has seen some spring barley crops with 25% of heads on the floor, and with some ears sprouting in the field.

One to escape the worst of the weather is Martin Ford, farm manager in south-east Dorset, who is expecting to finish cutting 400ha of winter wheat by the end of this week.

Yields of feed wheats varieties Diego, Costello and Graham were over 10t/ha, and spring barleys were cut early and hopefully acceptable for malting.

“We are reasonably pleased with the results, as we have missed the worst of the bad weather,” he says.

Andrew Hill, at agronomy and grain trading group Frontier, adds that summer rains south of the M4 have caused wheat to sprout in the ear and Hagbergs have dipped.

“Quality is holding up quite well apart from Wiltshire, Hampshire and through to Chichester where there have been problems with low Hagbergs,” says Mr Hill, who is grain originator team leader at the group.

With wheat harvesting coming to a close in the drier parts of south-east England, quality has been better, with plenty of wheat over 200 Hagberg and of useable quality.

One major wheat buyer and breadmaker, Warburtons, is not overly concerned about quality, which is holding up well, especially with early cut wheat, as it looks to fulfil its annual requirement for 150,000t of British-grown wheat.

Bob Beard, cereal development director at the group, says about 80% of the wheat the group is seeing has passed its minimum quality criteria of 12.5% protein, 225 Hagberg and 76kg/hl specific weight, with good wheat coming from Kent, East Anglia and up into Yorkshire.

“We are not too worried about wheat quality as there has been plenty of good wheat cut and we should get the grain we require,” he says.

In Shropshire, John Belcher is close to finishing combining his winter wheat with yields in line with the farm’s five-year average in a stop-start harvest between the showers.

His 65ha of Siskin and Diego varieties, grown for seed to supply seed group Wynnstay, are yielding 7.5-11.2t/ha on his farm within sight of the Welsh border.

Already in the shed are Cassia winter barley, which came off at 7.4t/ha, PX113 hybrid oilseed rape at 4.9t/ha and Propino spring barley at 6.6t/ha.