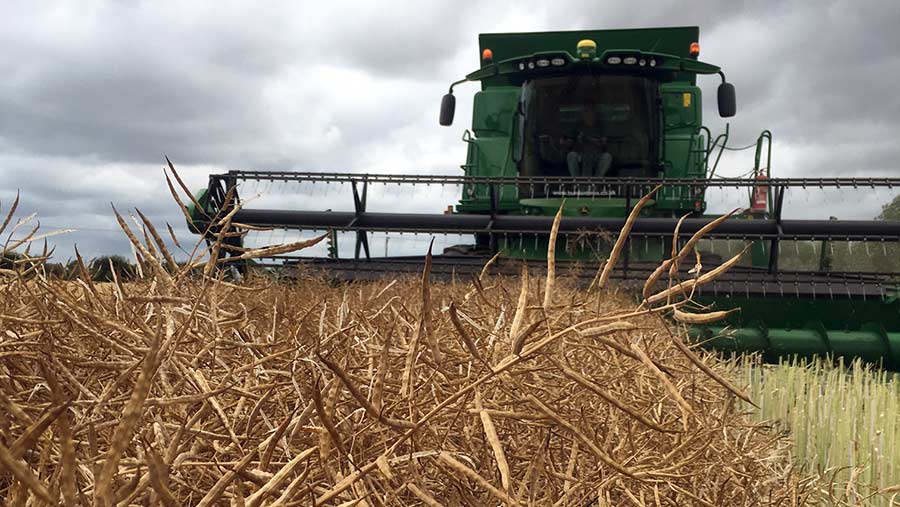 Quality of winter barley grain and oil content of rapeseed harvested so far are good enough to give growers cause for cautious optimism as early crops arrive in stores, traders say.

If warm, dry conditions prevail for the coming weeks then early-maturing wheat crops could be ready to cut in the next 10-14 days.

Specific weights are averaging between 63kg/hl and 64kg/hl on barley while rapeseed oil contents are hovering around 45%, according to Nick Brown of Wiltshire Grain, which has seen about 800t of winter barley and oilseed rape delivered so far.

Generally speaking there have been no major quality concerns so far, though there are fears that spring barley yields may have suffered from the drought at the beginning of the year, says Mr Brown.

Across in Hampshire, early quality data is reasonable, according to Bill Fife, assistant store manager at Hampshire Grain.

The farmer co-operative has taken in about 400t of winter barley so far and bushel weights are averaging 68kg/hl. About 150t of rapeseed has been delivered, with oil contents averaging 44.5% and adequate yields being reported.

“Harvest has started about 10 days earlier this year. Based on how crops are looking, oats will be ready in just under two weeks and we can expect to see wheat harvested by the last week of July,” says Mr Fife.

“So far, winter barley is looking better than last year. Interestingly, screening levels are high at 10-20% through a 2.25mm sieve, but this hasn’t affected bushel weights, which are coming in anywhere between 60kg/hl and 66kg/hl and are averaging 63kg/hl.”

Nitrogen levels in feed barley were high, ranging between 1.7% and 2.1% – a good early indicator of protein content in wheat. With moisture levels averaging 13.5-15%, there had been no need for drying yet.

At Old Rides Farm on the Isle of Sheppy, oilseed rape is averaging 4.75t/ha, with a moisture content of 7% and an oil content hitting 44.5%. 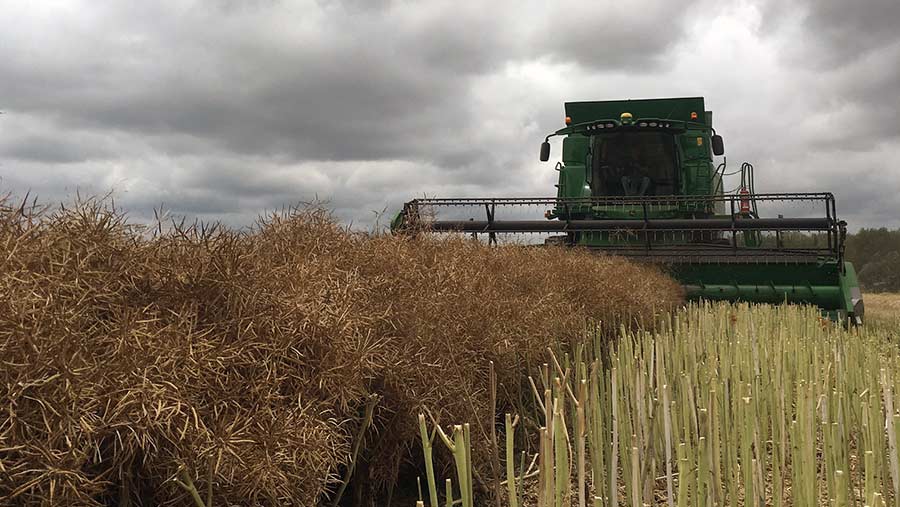 Oilseed rape being cut on the Isle of Sheppy © Ryan McCormick

“Harvest is normally early on the Isle of Sheppy – and this year it’s five or six days ahead of normal. We were the first on the island to have the combines out, and so far things are looking exceptionally well,” he says.

“We’re expecting to start Group 1 wheat harvest on 22 July, followed by spring barley in the second week of August.”

Rained off in Essex and Hertfordshire

Over in Essex and Hertfordshire, rain has paused operations for the past few days. However, the early indicators appear promising, says Stuart Attridge at Harlow Agricultural Merchants.

“Though it is still early days, winter barley is looking much better than last year. However, bushel weights are ranging between 58kg/hl and 64kg/hl – weights aren’t as high as we’d like on some of the hybrid varieties.”

The store has only received a few loads of oilseed rape to date, but farmers were optimistic about the harvest so far, adds Mr Attridge.

However, this is not the case in Essex, where oilseed rape has become a rare crop thanks largely to flea beetles wiping out 75-80% of the crop in the county.

Other crops are looking reasonable, says Mr Attridge, although there are some reports of spring barley falling flat in the heavy rain a few weeks ago, he cautions.

If more settled, good weather is on the cards for the coming weeks, he thinks some early-maturing wheat varieties such as Skyfall could not be far away from meeting the combine.