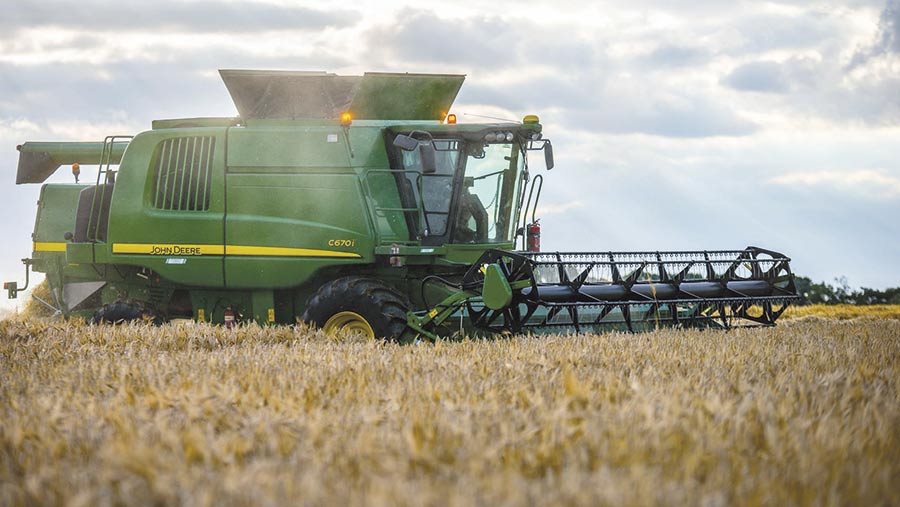 Grain store managers are expecting a rush of deliveries once the weather dries up as many wet cereal and oilseed rape crops are ready to cut.

In Lincolnshire, Dan Murphy, laboratory and haulage manager at Woldgrain, said about 5,000t of barley and 3,000t of rapeseed had been delivered to the store this season.

This accounts for about 9% of the group’s total intake, but proceedings had gone fairly quiet with the wet weather.

Harvest started about a week ahead of normal, but things were now back to the five-year average, said Mr Murphy.

Quality has been good so far, although barley on light land had specific weights down at 56kg/hl due to drought stress, while heavier land had produced about 66kg/hl.

Rapeseed oil levels have been good at between 44% and 46%, and Mr Murphy said that this is on the good side of average and it has mainly come in dry.

Harvest had come to a grinding halt in Peterborough, according to Guy Palmer, trader at Dalmark Grain.

Barley quality was better than last year, with specific weights averaging 63kg/hl, but there were samples at 55kg/hl, while others hit 70kg/hl.

Yields were reported at about 6-7t/ha with 70-80% of the crop harvested in the area.

Several growers had started into wheat, with high specific weights of up to 80kg/hl, said Mr Palmer.

Oilseed rape was coming in very hot, which was a bit of a struggle for the store. Yields were about 3.7t/ha, so growers were fairly happy.

Bean crops were turning nicely in the area, but Mr Palmer has seen some insect damage.

Crops are podded up nicely, all the way to the floor, so there should be decent yields, he added.

At Fengrain, in Cambridgeshire, a few bits and pieces of barley, oilseed rape and wheat have come in before the rain, with quality looking good, said managing director Rob Munro.

Feed barley had yielded well, with quality above the five-year average, while oilseed rape was in good order and significantly better than last year.

A small amount of Group 1 milling wheat had arrived at the store, with protein contents of 13% and Hagbergs of 300.

“However, this was less than 1% of our wheat crop and growing conditions are quite troublesome, with worries about Hagbergs and fusarium,” said Mr Munro.

In Wiltshire, Julian Cooke had finished his oilseed rape harvest at Charlbury Farms, near Swindon, with 120ha of the varieties Incentive and Dariot averaging 4.4t/ha – well above the farm average of about 3.7t/ha – and moisture contents ranging from 6% to 12%.

There was also 243ha of Dickens, Diego and Siskin winter wheat varieties on the farm, which should be ready to cut in a week.

Mr Cooke added that the wheat is all looking good, but the Dickens looks really impressive.

He also has 142ha of Propino spring barley and 61ha of linseed to cut.

“It will be really interesting to see how the weather has affected things as it split the germination of the spring barley, meaning some of it is two to three weeks behind the rest,” he said.

Yields of winter barleys are coming in nearly 3% above the five-year average, according to early AHDB trial results.

With five sites now cut, yields are averaging 9.92t/ha, compared with the five-year average of 9.64t/ha, with the Broughton site in Hampshire, topping at 10.55t/ha.

Belfry was the best-performing variety, achieving 114% of the control, while Bazooka and new candidate variety Astaire averaged 113%.