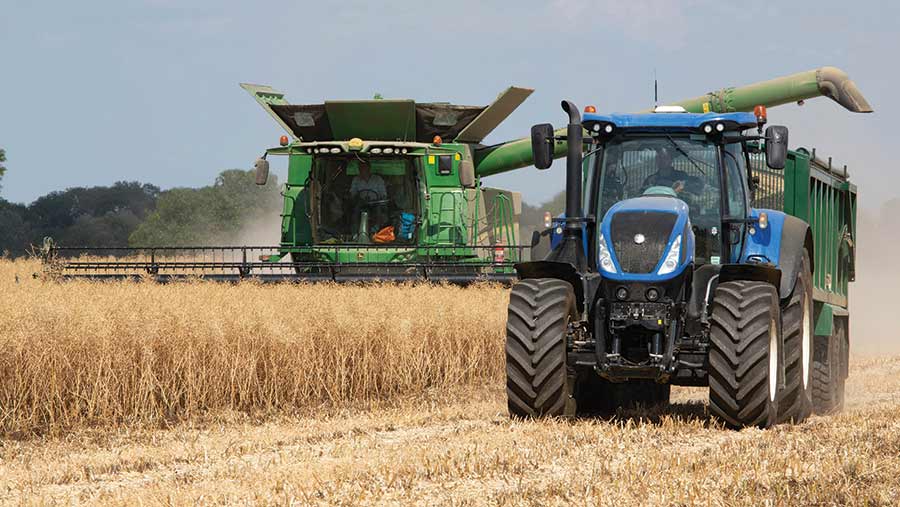 Winter barley continues to look good in terms of quality. However, grain stores are reporting that oilseed rape is looking less promising with both yield and quality concerns.

“Barley is probably a little bit better than in previous years as everything is coming in drier,” said John Collins, store manager at Cannington Grain.

Specific weights are good, and the oilseed rape is the only real worry.

“The barley is really high quality – with bushel weights of 70kg/hl. We’re really happy,” he said.

One positive is that the early loads of milling wheat have high Hagbergs of 400, with 13% moisture and specific weights of 80kg/hl.

Moving across to Wessex, the feed barley has been good so far, according to Ian Eastwood, farm grain manager at Cefetra Grain.

“Not the prettiest but the bushel weights are good – we’re pleasantly surprised. But the yields are down,” he said.

Yields on the better barley had been above 7.4t/ha, which was not disastrous, he added. Bushel weights came in at 65-66.5hl/kg, with moisture content at 12.5%, which was very marketable, he added.

“Yields were better than expected seeing the winter that we’ve had.”

At Aylsham, north of Norwich, Dewing Grain is in full flow of the winter barley harvest and results are better than expected.

“The yields are average,” said chief executive Andrew Dewing. “There were fears that it would be terrible. It’s not a bumper yield, but there is relief.

“Last year was early and we expected this year to be late, but it was a sprint to the finish.

He added: “Maris Otter, Flagon and Craft are all performing well and Craft has proved itself with 66-70kg/hl bushel weight.” In terms of screenings, the bar has been lowered, and retention as low as 70% is being accepted.

Oilseed rape was probably suffering the most, he said. “It’s very dry and brittle – we’ve heard of farmers cutting oilseed rape at 4am to get the right moisture.

The first AHDB harvest results from sites in Suffolk and Lincolnshire suggest that winter barley yields are holding up well, being above the five-year mean.

Control varieties at the Welbourn site in Lincolnshire averaged 11.07t/ha while the Suffolk site yielded 9.03t/ha. This compares with a four-year average of 9.88t/ha.

“We suspect there will be a lot of seed loss and a disappointing yield. There was a very short flowering period due to the cold snap which could have resulted in less flowers and less pods,” he added.

It’s likely that in the Norfolk area, spring barley and winter wheat will be cut in July, around a week earlier than average.

Oilseed rape harvest had just started on Bruce Udale’s 518ha family farm near Telfold, Shropshire. Yields were coming in at about 4.2t/ha, but normally he would expect 4.4t/ha.

“Generally speaking we have had a below-average year,” said Mr Udale.

He will be moving on to Mascani oats next, which are ready on the lighter ground, but he is prepared for a poor specific weight and yield.

There are also concerns over the winter wheat. “We suspect that on the lighter land they will be a shrivelled-up disaster, but more reasonable on the heavier ground,” he said.

Make sure you are up to date with all the latest harvest 2018 developments by following Farmers Weekly’s Harvest Live Twitter account (@FWharvest) and liking our Facebook page (@FWHarvestLive). Don’t forget to use #Harvest18 when tweeting.
You can also get all the news and analysis on our harvest page.