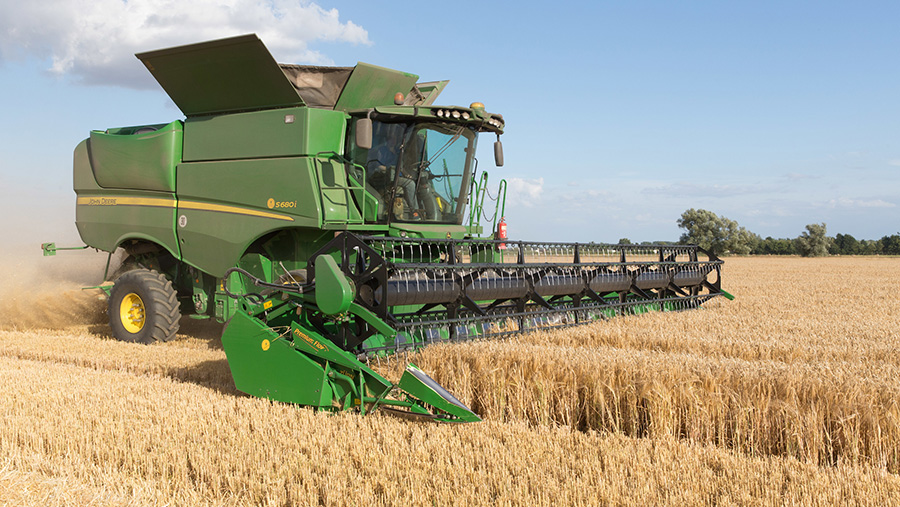 Spring barley is generally yielding better than expected in Scotland with reports of good samples and straw quality.

However, winter barley and winter wheat is more of a mixed picture with some poor yields.

Not far from John O’Groats, contactor and farmer Andrew Mackay is still waiting for his spring barley to ripen.

He is around a third of the way through, having cut 242ha – including the most northerly field of barley in the UK – with a further 485ha left.

See also: Why UK growers should consider soya in the rotation

“The barley is looking well – it’s a bold sample and there’s plenty of it,” said Mr Mackay.

Although moistures have been coming in at 17-19%, drying capacity is the biggest problem they are facing.

In east Scotland, John Steel is in the final throes of combining Beluga, Istabraq and Hardwicke wheat, with yields at 7.6t/ha on Turin Home Farm, Forfar.

“Quality was the highlight – the spring barley had a bold sample,” he said. Yields were unexciting, with the best reaching 4.9t/ha.

Further south, Sandy Norrie, arable manager at Duncan Farms, has found that his 485ha of spring barley did unexpectedly well. The 445ha of Laureate and 40ha of Sassy averaged 6.9t/ha, with nitrogen around 1.6-1.8%.

The wheat has mixed results as some of it has burnt up in the hot dry weather – which has brought down the average yield. Hardwicke has the best yield at 10.6t/ha, with Silverstone just behind at 10.3t/ha.

It is a very good year for his 700ha of oilseed rape. Butterfly averaged 5t/ha – the worst being 4.4t/ha and the best being 5.5t/ha, while Alizze is good and consistent, averaging 4.4t/ha.

Winter barley yields are down 9% on last year. “However, anything sown before the third week of September would have been 10% higher overall,” he added.

Mr Norrie hopes to be finished with harvest on Sunday (2 September) – weather permitting, which would be one month earlier than last year.

“It’s been nearly ideal conditions – this harvest has been pleasing for man and machinery,” he said.

In Yorkshire, Richard Wilkinson has finished his winter barley and wheat harvest with below average yields but good overall quality.

His 16.5ha of Cassia winter barley averaged 8t/ha, which was just 1t/ha below his usual average.

The 27ha of Revelation wheat averaged 9t/ha – around 1.5t/ha below average – with bushel weights between 75 and 76kg/hl.

“It looked good, apart from some small droughted areas in which the tillers had died but the heads that survived yielded well,” said Mr Wilkinson