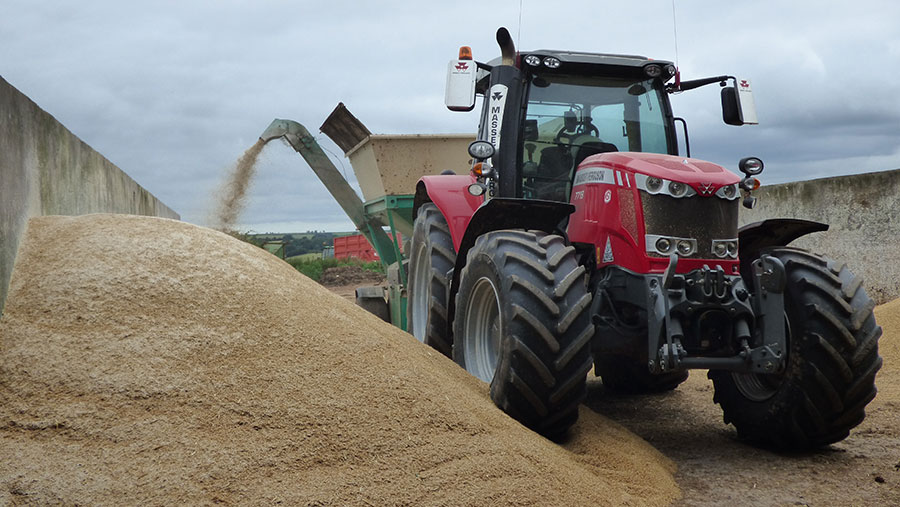 Devon dairy farmer David Gillbard is pleased with his feed-grade winter barley harvest, which was cut and crimped and is intended for use in the herd’s mixed ration.

Cutting of the 25ha Florentine winter barley variety began last Friday with initial yields of 6.5t/ha and a specific weight of 68kg/hl.

See also: How to avoid blackgrass spread at harvest

The crop was cut at 15% moisture, crimped and treated with granular urea in order to increase its feed value, enhancing its keeping quality and to deter rodents, and then it was ensiled in a clamp.

The crimping process involves harvesting cereals early with a high grain moisture content, and then putting the grain through a crimping machine to expose its carbohydrate and protein. A preservative is then applied so the product can be fed throughout the year.

“Granular urea breaks down into ammonia gas in the clamp, preserving grain and increasing protein content of the feed by 4%,” Mr Gillbard added.

The advantage of cutting the crop at a lower moisture level, rather than the conventional 25-30%, means the straw is ripe and ready to bale after harvest for use as bedding and feed.

This method of treating home-grown barley has been used on the farm for 15 years and works well with the 300-cow dairy unit.

“Urea-treated barley provides a cost-effective, simple and versatile cattle feed, which the cows milk well on, with minimal wastage and no risk of effluent,” he says.

This is the first time winter barley has been grown on the mid-Devon farm for 17 years, as spring varieties fit better with the farm’s crop rotation.

Last year’s summer drought left a feed shortage, meaning an early harvest of winter cereals this summer was needed for both feed and bedding.

Next on the harvest list at Bishopsleigh Farm, near Black Dog, will be 36ha of spring barley, which will be ready to cut, crimp and urea-treat next month.