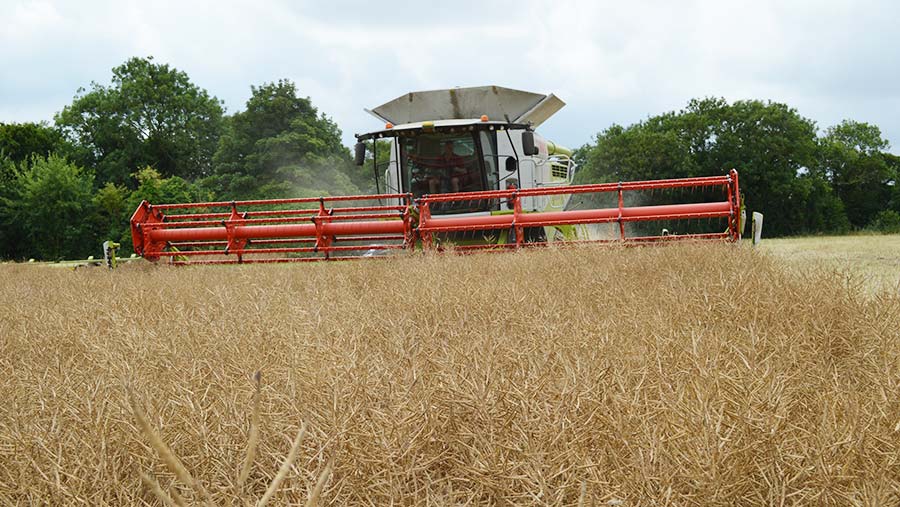 Oilseed rape harvest kicked off in Kent over the weekend, with yields slowly improving as combines move through crops and on to better-quality land.

James Loder-Symonds started cutting the variety Picto on Friday and Saturday and has now cut 50ha.

Although yields on some light, chalky soils were low to start with, as he has moved on to better soils, yields are now averaging 4t/ha.

“We are reasonably pleased with the yield, but it has been slow going and we really need more sun on the crops,” he told Farmers Weekly.

The start to harvest is about three or four days later than normal in this corner of east Kent, and Mr Loder-Symonds is seeing plenty of flea beetle damage.

Flea beetle on the pods

“We are seeing flea beetles on the pods and also seeing main stems hit by flea beetles and tillers that have compensated,” he adds.

He has 300ha of oilseed rape in total to cut at Nonington Farms, between Canterbury and Dover.

Mr Loder-Symonds is director of the farm group, which grows more than1,000ha of combinable crops from its base in the village of Goodnestone, farming soils ranging from brickearth clays to chalky soils on the edge of the North Downs.