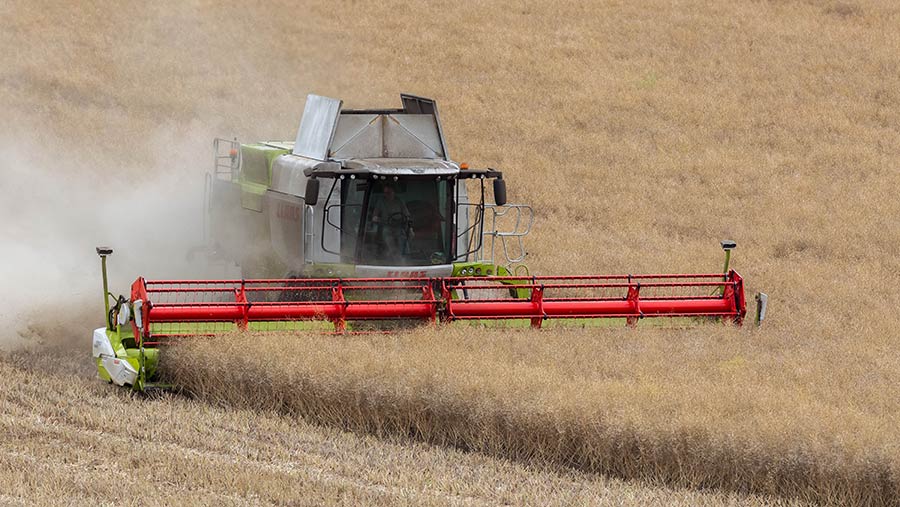 Oilseed rape yields hit an impressive 5t/ha for one Kent grower on the Isle of Sheppey as the farm missed the worst of the flea beetle and drought problems seen elsewhere.

James Attwood said his farm had only 60ha of its 290ha of oilseed rape still to cut, with yields averaging 5t/ha across the only variety the farm grows, Elgar.

“Oilseed rape has done really well for us. The crop established well and is giving good oil levels of 44-45%,” he told Farmers Weekly.

The farm in northern Kent usually averages 4.25-4.5t/ha, but this year the weather has suited the crops, while it also saw only light cabbage stem flea beetle damage.

The farm, which trades as SW Attwood at New Hook Farm, is expected to finish the oilseed rape harvest tomorrow, and is looking to move into winter wheat by the end of the week.

Just south of Sheppey on the Kent mainland, Mark Bowsher-Gibbs was pleased with his first two fields yielding 4.6t/ha after cutting a quarter of his 200ha area of oilseed rape.

“We were pleasantly surprised as the crop did not look that good even though we did not suffer from flea beetles and drought as much as others,” he said.

The crop cut is the variety Barbados, combined at 9-10% moisture, but he has no details yet on oil levels. Mr Bowsher-Gibbs is farm manager at GH Dean, Hempstead Farm, Tonge near Sittingbourne.